Palestinian Authority president turned MBS down, saying accepting the 'deal of the century' would end his career, Al-Akhbar reports Abbas rejected the offer, saying supporting US President Donald Trump's "deal of the century" would be "the end of his political life", the paper reported on Tuesday, citing leaked diplomatic reports based on conversations between the two leaders.

According to Al-Akhbar, the reports were written by Jordanian envoy to Ramallah Khaled al-Shawabkeh and were based on briefings with a number of Palestinian officials in Ramallah.

The reports date back to December 2017 and January 2018 in the aftermath of Trump’s controversial declaration that the US considered Jerusalem to be the capital of Israel and planned to move its embassy there. They were written by Shawabkeh following discussions with Palestinian officials.

In a 4 January 2018 report cited by Al-Akhbar, Shawabkeh wrote to the Jordanian foreign ministry and said that Abbas was “upset” by several offers he had received during a visit to Saudi Arabia the previous month, but had refused to discuss them with Palestinian officials.

One of the Saudi offers, according to the Jordanian's report, was to exchange Palestinian recognition of Trump's deal for $10bn to assist West Bank authorities and refugee resettlement, along with “unlimited financial and political support”.

According to Al-Akhbar, Mohammed Bin Salman asked Abbas how much his entourage's annual budget was. "I am not a prince to have an entourage," Abbas reportedly responded.

“How much does the PA and its ministers need?” Bin Salman then said.

"One billion US dollars," Abbas replied, to which MBS was said to have responded: “I will give you $10bn over ten years if you accept the deal.”

In an earlier report, dated 26 December 2017, Shawabkeh writes that Bin Salman told Abbas during his visit to Saudi Arabia that “the Americans are ready to offer the Palestinians the land on which they live”. The crown prince reportedly added that Saudi Arabia, along with other Arab countries, had been asked by the Americans to provide the Palestinians with financial support to launch projects in the West Bank that would lead to economic prosperity.

The projects would also, he said, see the expansion of the West Bank's Area B, where the PA and Israel hold administrative and military control, and Area C, which constitutes 60 percent of the territory, and is exclusively under Israeli military authority.

“Saudi Arabia will support the PA with more than four billion in principle,” the envoy wrote, citing conversations between Abbas and MBS.

Shawabkeh mentioned in his report that Abbas told Bin Salman that he could not accept any concessions with regards to settlements, the two-state solution and Jerusalem. Abbas, however, believed that the Americans would not provide any written proposals, but would adopt a “Balfour-style tactic”.

According to the Jordanian envoy, Abbas said that the PA would dismantle itself if it became subject to any pressure from any side, and would “hold Israel responsible for managing the affairs of occupied territories".

Kushner says deal to be announced in June

Donald Trump's son-in-law and senior advisor Jared Kushner said last month that the US administration will reveal its long-awaited deal in June after Israeli prime minister Benjamin Netanyahu forms a coalition government, which is expected to be finalised in the coming weeks.

Palestinian leaders have vehemently denounced key points of the plan that have been leaked. They include recognising Jerusalem as the capital of Israel, offering the East Jerusalem suburb of Abu Dis as the capital of a future Palestinian state, taking refugees' right of return off the table, and drastically cutting the number of registered refugees.

Saeb Erekat, the veteran Palestinian negotiator, told MEE in June that the deal of the century was not a deal and was already being implemented on the ground. 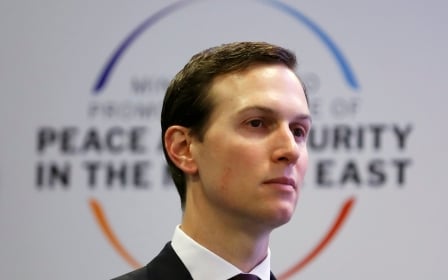