Saudi King Abdullah has called on Egypt to back a Gulf Arab agreement to support Qatar’s re-entry into the diplomatic fold following tensions over its support for Muslim Brotherhood members.

"I appeal to the people and leadership of Egypt to seek with us the success of this step in the march of Arab solidarity – as we always have known it – as supporter for the efforts of the joint Arab action," the king said on Wednesday, quoted by the Saudi Press Agency.

The agreement between Gulf states reached in Riyadh on Sunday offers "a comprehensive framework for unity, consensus, and renouncing dispute" among Arab states, the king said.

Saudi Arabia, Bahrain and the UAE agreed on Sunday to return their ambassadors to Qatar, according to a statement by the Gulf Cooperation Council (GCC) issued after a meeting of its members in Riyadh.

The office of the Egyptian president welcomed the Saudi King’s statement on Wednesday.

Egypt "confirms its total compliance with this sincere call, which represents a major step toward a common path of Arab cooperation," the statement said.

The three Gulf States withdrew their ambassadors from Doha in March in protest at Qatar’s alleged "interference" in their internal affairs by supporting Muslim Brotherhood members and their affiliates.

Qatar has been a supporter of ousted Egyptian president Mohamed Morsi, who was overthrown in 2013. The UAE and Saudi Arabia have backed his successor, military general Abdel Fatah el-Sisi.

Both Saudi Arabia and the UAE declared Morsi’s Brotherhood a terrorist organisation following the withdrawal of their ambassadors.

Accusations have also flown alleging a proxy war between Qatar, Saudi Arabia and the UAE in Libya, where the UAE and Saudi were charged with bombing Qatar-backed Brotherhood affiliates and their allies.

In Wednesday's statement, King Abdullah said the kingdom looked forward "to the start of a new phase of consensus" among Arab nations.

He voiced hope for "security and stability for our people amid these circumstances and challenges" facing the region.

Sunday's reconciliation comes amid security fears over the rise of the Islamic State group in Syria and Iraq.

Saudi Arabia, the UAE, Bahrain and Qatar have all joined the US-led anti-Islamic State coalition, which has involved a series of air strikes carried out against the militant group that controls large swathes of Iraq and Syria. 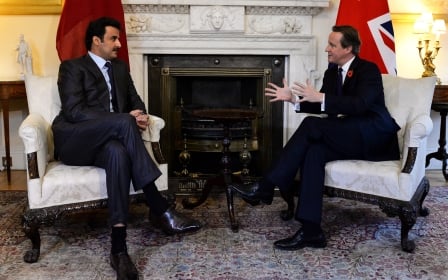