An employee at the Saudi Aramco oil facility gestures while standing near a damaged silo, at the plant in Saudi Arabia's Red Sea city of Jeddah (AFP)
By
MEE and agencies

Saudi Arabia is set to sell more shares in its oil giant Aramco in the coming years, following the public listing of the company in 2019.

"There will be Aramco share offerings in the coming years, and this cash will be transferred to... the Public Investment Fund to be re-injected inside and outside the kingdom," Saudi Crown Prince Mohammed bin Salman told Riyadh's Future Investment Initiative (FII) conference in a virtual session on Thursday.

The prince did not specify a timeframe or what portion of the company's shares will be sold in future offerings.

Aramco was listed on the Saudi bourse in December 2019 following the world's biggest initial public offering, generating $29.4bn for 1.7 percent of its shares. 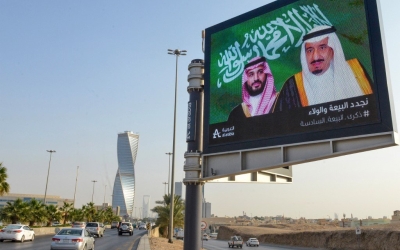 Late last year, Aramco posted a 44.6 percent slump in third-quarter profit, as the pandemic weighed on demand for crude oil.

Saudi Arabia, the world's biggest crude exporter, has been hit hard by the double whammy of low prices and sharp cuts in production.

A drop in oil income is expected to hinder bin Salman's ambitious "Vision 2030" reform programme to overhaul the economy.