'Scores' of Hadi supporters rounded up by secessionists in Yemen's Aden 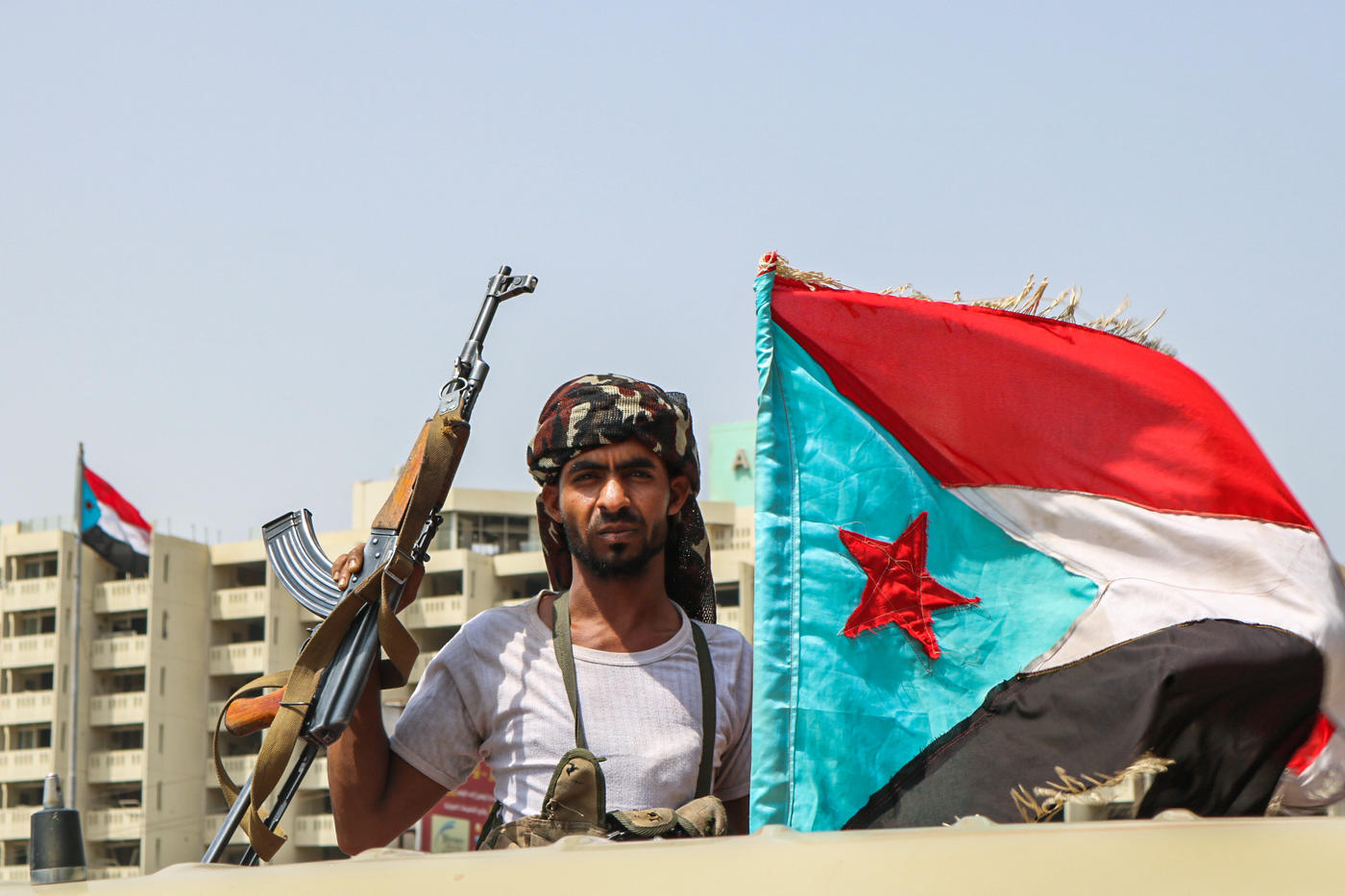 Dozens of Yemenis loyal to President Abd Rabbuh Mansour Hadi's government have been arrested since his forces pulled out from Aden, southern secessionists said on Saturday.

Following the latest offensive in a see-sawing month-long conflict in Yemen's south, pro-government forces on Thursday retreated from areas of Aden city that they had captured the day before.

The Security Belt Forces (SBF), the military wing of the Southern Transitional Council (STC), pushed Hadi's troops back to areas of nearby Abyan province with the help of Emirati air strikes and reinforcements redeployed from the north.

How the Southern Transitional Council rose to power

With financial, military and political support from the United Arab Emirates, the Southern Transitional Council (STC) has emerged as a powerful entity, further complicating the war in Yemen.

The council is a secessionist movement calling for the revival of the the former independent state of South Yemen which existed from 1967 to 1990.

Supports say the STC has brought stability to parts of the south since its establishment in 2017 while critics hold that the council is merely an Emirati tool to expand its leverage over strategic seaports and islands off the coast of Yemen, particularly Socotra in the Gulf of Aden.

Since its establishment in 2017, the STC has amassed large military forces enabling the group to seize Aden twice, once in January 2018 and again this August when it expelled the internationally recognised government from the city.

On 4 May 2017, thousands of secession supporters went into the streets of Aden to protest after exiled Yemeni President Abd Rabbuh Mansour Hadi dismissed Aidarus al-Zubaidi, Aden's governor, and called on him to form a council to unite the separatists.

After the protests, members of the council told Middle East Eye, several separatist leaders went to al-Zubaidi’s house in Aden to ensure that he would pick up their names for the new council and secure representation for their provinces.

Separatists from the oil-rich province of Hadramout, for example, told al-Zubaidi that the council's seats should be distributed based on the size of provinces, their wealth and population, an assessment that would have left the southeastern province with the biggest share of the future council, an STC member told MEE.

As the council took shape following days of deliberation, the STC member said the final step was to run names by Emirati officials in Aden and Abu Dhabi. The Emiratis, he said, expressed concern about some of the potential members, fearing that they might be members of the Islah party, the Muslim Brotherhood's branch in Yemen.

“They do not want anyone with links to the Muslim Brotherhood to be part of the council,” STC member said on condition of anonymity because was not authorised to speak to journalists.

A week after the Aden rally, al-Zubaidi announced the establishment of the council on 11 May.

Posing like a state leader with two South Yemen flags, al-Zubaidi, said the 26-member council would be called the Southern Transitional Council and that it would pursue two goals: establishing councils in the south's provinces and districts, and representing the south domestically and internationally.

Al-Zubaidi named himself as the STC's leader and Hani Ben Briek, a Salafi leader, as his deputy.

Born in the province of Dhale in 1967, al-Zubaidi was a soldier who fled Yemen in 1994 after pro-unification forces, led by former president Ali Abdullah Saleh, crushed a separatist effort by southerners. He returned to his hometown province in 1996 where he formed an armed rebellion against Saleh’s forces.

He was leader of fighters in Dhale during the expansion of the Houthi military offensive in 2015.

Hadi appointed al-Zubaidi as Aden's governor in December 2015 as the city was sliding into lawlessness following a car explosion, later claimed by the Islamic State group, that killed Zubaidi's predecessor.

But in 2017, Hadi sacked Zubaidi, weary of his secessionist tendencies and close relations with the Emiratis.

After al-Zubaidi established the STC,  Abu Dhabi sent more funds to pay new council members, according to the STC member who spoke with MEE.

“The UAE is paying for everything including salaries of the council’s forces and leaders,” he said.

Responding to al-Zubaidi’s declaration, Hadi’s government strongly rejected the STC, saying it would undermine the security and stability of a united Yemen. The Houthis echoed similar concerns, accusing separatists of being American and Saudi-led coalition stooges.

Hadi also dismissed three standing governors who declared their support to the council.  The STC expanded their military presence in Aden and other southern provinces, winning support from Security Belt and Shabwani Elite, two UAE-backed forces.

Al-Zubaidi moved to establish STC military bases in Aden and arranged military parades inside the city under the nose of the internationally-recognised government which appeared unable to stop the STC from expanding.

Separatists controlled government officials by restricting movements within Aden and sometimes preventing officials from leaving or returning to the city.

In November 2017, al-Zubaidi announced that he was forming the National Assembly, a 303-member body that would serve as a parliament. The government was unable to the stop the expansion of the STC as they established a shadow government in Aden, and small councils in districts in the south.

Politically and socially, the STC engaged in meetings with foreign dignitaries inside and outside Yemen, organised football tournaments and sponsored injured fighters to travel abroad for treatment.

As the STC's capabilities built up, tensions between the council and the government’s Presidential Protection Forces erupted into a full-scale battle in January 2018 in Aden. Separatists defeated loyalists and proceeded to besiege cabinet ministers in the presidential palace.

On 1 August, a missile attack in Aden claimed by the Houthis killed dozens of separatist soldiers including a military commander during a military parade.

Under huge pressure from supporters to take revenge, separatists marched towards the presidential palace, accusing the government of being complicit. Clashes erupted between government forces and the STC forces, spreading to all of the city's districts.

On 24 August, the STC suffered its first major setback since taking Aden when government forces pushed back their offensive on Attaq city, the capital of Shabwa.

Loyalists regrouped and later seized control of Shabwa, liberated Abyan from STC force and quickly reached the outskirts of Aden on 28 August. With government forces on the verge of storming Aden, UAE warplanes conducted bombing raids, claiming to attack "terrorist militias" while the Yemeni government said dozens of its soldiers had been killed.

The United Arab Emirates' air strikes killed more than 40 of Hadi's troops, which are backed by UAE ally Saudi Arabia. The two are ostensibly partners in the Saudi-led coalition fighting the Houthi rebel movement in the north.

Once the pro-government forces left Aden on Thursday, the SBF raided homes and businesses across the city, detaining "scores" of pro-Hadi activists, politicians and clerics, accusing them of "terrorism," STC officials and witnesses told Reuters news agency.

Residents told Reuters that an uneasy calm surrounded the city.

Sources told Middle East Eye that Hadi's forces, under the command of Brigadier Abdullah al-Sobaihi, were massing around the Abyan province village of al-Alam, a traditional gateway to Aden.

The conflict in south Yemen is essentially a civil war within a civil war.

Yemen has been at war since 2014, when the Houthi movement chased Hadi's government out of the capital Sanaa, prompting the Saudi-led coalition to intervene on its behalf.

The UAE is a key player in the coalition, but has begun a troop redeployment in an attempt to hand more control and responsibility on the front lines to its Yemeni proxies, such as the STC.

However, earlier this month the southern secessionists turned on their erstwhile ally Hadi, chasing his forces out of Aden, Abyan and much of the surrounding area.

After early gains, the SBF and its allies came across fierce, Saudi-backed resistance in Shabwa province, and pro-government units forced their way back towards Aden, briefly claiming control of the city on Wednesday.

The SBF contains thousands of fighters armed and trained by the UAE, and wishes to restore the republic of South Yemen that was independent between 1967 and 1990.

The insecurity in Yemen’s south has also provided a platform for militant attacks, with an Islamic State group-claimed bomb attack on Friday killing six separatist fighters on Aden's outskirts.

Hadi, who is based in Riyadh, has called on Saudi Arabia to intervene and convince the UAE and its proxies in Yemen to end their attacks.