Muadh al-Suri, 15, who was shot in the stomach on Friday east of the al-Bureij refugee camp, died on Saturday, a Gaza official says. A second Palestinian protestor has died after being shot by Israeli troops during protests on the Gaza border on Friday.

Muadh al-Suri, 15, who was shot in the stomach on Friday east of the al-Bureij refugee camp, succumbed to his wounds on Saturday, Gaza ministry spokesman Ashraf al-Qudra said.

On Friday, Gaza's health ministry had reported Ahmad Yaghi, 25, had been killed during the protests and that of the 220 hurt, 90 suffered wounds as a result of live fire.

An estimated 10,000 demonstrators were gathered on Friday evening along the "buffer zone" near the fence separating the besieged Gaza Strip from Israel, in order to participate in the Great March of Return.

The Great March of Return began on 30 March, calling for an end to the 11-year Israeli-led blockade on Gaza and for Palestinian refugees' right of return to the lands that their families fled during the establishment of the state of Israel in 1948.

While protesters initially came out every day for the first months of the march, in recent weeks demonstrations have mainly occurred on Fridays.

By 8:30pm local time (5:30pm GMT) on Friday, the health ministry said that at least 220 Palestinians had been wounded by Israeli forces.

A Middle East Eye correspondent east of Gaza City reported that the Israeli army was shooting live bullets at the protesters, in addition to ground forces and small drones launching tear gas canisters.

In what has become common practice in the past four months of demonstrations, Palestinians burned tyres in order to block the view of Israeli snipers, and attempted to cut through the large coils of barbed wire placed by Israeli forces on the Gaza side of the fence.

“We continue with these marches until we achieve the demands of the Palestinian people and lift the siege of the Gaza Strip,” protester Abdullah Jawdeh told Middle East Eye. “This is the 19th Friday of demonstrations, but we continue to attend with our families.

“Tens of martyrs and thousands of wounded have fallen, but this will not defeat our morale.”

Since 30 March, the ministry estimates that at least 156 Palestinians have been killed and another 17,350 have been wounded by Israeli forces stationed beyond the fence.

Israeli authorities tightened the siege in the Palestinian enclave in an attempt to pressure Hamas, whom it blames for the Great March of Return - an allegation that the campaign's organisers have rejected.

Israeli officials have been outraged by some demonstrators' use of kites and balloons set on fire, which they fly over the separation fence into Israel, claiming that the kites have sparked fires damaging some 7,000 acres of farmlands and forests.

But Palestinians view the inexpensive flying devices to be a tool of resistance against the well-armed Israeli forces stationed behind the fence that have killed scores of peaceful protesters and wounded thousands.

Unconfirmed reports have recently emerged that Hamas, the ruling party in Gaza, was holding talks with Egyptian officials to broker an agreement with Israel to loosen its 11-year blockade.

Some top ranking Hamas officials arrived in Gaza from Egypt late on Thursday to discuss the possible deal but no details have been given. The delegation included the group's deputy chief, Saleh al-Arouri, exiled by Israel in 2010.

Reporting from Mohammed Asad in Gaza. 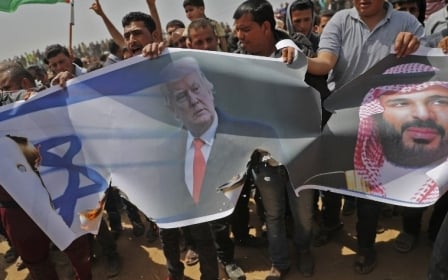