The top Democrat on the US Senate Foreign Relations Committee launched a blistering attack on US President Donald Trump's first term in office, saying in a report that Trump has a "profound affinity for dictators and autocrats", including Saudi Crown Prince Mohammed bin Salman.

Senator Bob Menendez, who is poised to assume chairmanship of the Foreign Relations Committee if Democrats win control of the Senate in 3 November elections, said on Wednesday that the Trump administration had ignored and excused "brutal and barbaric human rights violations while pursuing arms sales and close ties with the kingdom".

In the 74-page report, Menendez said the "personal and sometimes financial relations of President Trump and his son-in-law Jared Kushner with Mohammed bin Salman (MBS), the Crown Prince, have also hovered in the background of the President's desire to establish close ties early in his presidency".

The report was a thorough analysis of Trump's foreign policy over his four years in office as well as their consequences, including interviews with former Trump staffers, foreign government officials and foreign policy experts.

"The extent of President Trump's willingness to excuse any level of human rights abuse was demonstrated by his reaction to the murder of Jamal Khashoggi. Two months after Khashoggi's death, Trump was exchanging pleasantries with the Crown Prince at the Group of 20 (G20) summit and was encouraging US businesses to invest in Saudi Arabia.

"Six months later, his administration pushed through $8 billion in arms sales to Saudi Arabia and the United Arab Emirates (UAE), over the strenuous objections of Congress, and despite increasing ties between the countries and China."

Saudi Arabia and the US have enjoyed warm relations under Trump, who has repeatedly defended the kingdom despite global outrage over Khashoggi's murder.

Still, in a subsequent conversation with POLITICO, Menendez failed to offer a clear answer on how a Democratic administration would hold the kingdom and the United Arab Emirates accountable over human rights violations in Yemen. US election: A Biden presidency would not promote democracy in the Middle East
Read More »

Instead, Menendez heaped praise on the UAE's decision to normalise ties with Israel and applauded the "greater openings within civil society, especially for women" in Saudi Arabia.

"I just get concerned when I see a break-neck speed of [weapons] sales being proposed to the UAE without the appropriate, deliberative process that goes through from the State Department and the Department of Defence and with our allies to understand the consequences of such sales," he said.

Normalisation deals between Israel and the UAE and Bahrain have been viewed positively by US lawmakers from both sides of the aisle, while Palestinian leaders have viewed the accords as a "stab in the back".

Since announcing his candidacy for president, Joe Biden has repeatedly pledged to "reassess" the US relationship with Saudi Arabia but failed to offer any concrete policies regarding the kingdom.

"Under a Biden-Harris administration, we will reassess our relationship with the Kingdom, end US support for Saudi Arabia's war in Yemen, and make sure America does not check its values at the door to sell arms or buy oil," Biden said earlier this month.

While Menendez was opposed to the Iran nuclear deal when it was first implemented in 2015, the US senator said that Trump's decision to leave it was even more catastrophic, because it abandoned Washington's allies and allowed Iran more room to pursue a nuclear bomb. Iran has repeatedly denied it is seeking to build nuclear weapons.

"The consequences of leaving unilaterally by the Trump administration, without any effort in internationalising our efforts, was a huge mistake," he said.

Menendez said he had spoken with European allies about returning to the Iran nuclear deal, but through a new framework that would work to curb their weapons development, including ballistic missiles, and nuclear proliferation. "I often refer to this as JCPOA Plus. Because the reality is that we will need more than the JCPOA at the end of the deal," he said.

Biden, who served as Barack Obama's vice president when the deal was signed in 2015, has vowed to re-adopt the accord if Iran returns to full compliance with its regulations.

Still, Tehran has made it clear it has no plans to renegotiate a nuclear deal, and if the US wants to return, Washington must return to the original deal without any changes.

"The United States did try its best to get a good deal. And the previous administration, where candidate Biden was the vice president, believed it was a good deal. Now, we're not going to negotiate a deal," Iran's Foreign Minister Mohammad Javad Zarif said last month.

Zarif said the matter of who wins the US presidency in November was a nonissue and that Tehran would approach either of the two potential administrations in the same vein.

The top Senate Democrat also scorned Trump for decisions he made regarding Syria, saying that his moves can be characterised by "chaos".

Near the end of 2018, the US president abruptly announced that he was pulling all American troops from Syria. While some soldiers have been withdrawn, there remains a sizeable military presence in northern Syria as part of an international coalition fighting the remnants of the Islamic State group. US troops also are guarding oil fields in the region.

"Trump's December 2018 Syria announcement was also characteristic of his approach because it was not the final word. After a number of shifts, walk-backs, subsequent announcements, and pushback, Trump's pledge to withdraw became effective in October 2019, nearly a year later," Menendez said.

"President Trump's foreign policy has been marked by chaos, neglect, and diplomatic failures," he said in the report. "Sudden pronouncements, such as the withdrawal of US troops from Syria, have angered close allies and caught US officials off-guard." 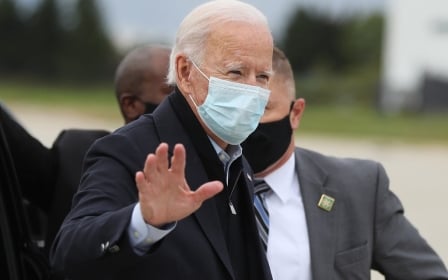