Human rights campaigners from Syria, Yemen and other countries say they are struggling to meet decision-makers in New York and Washington 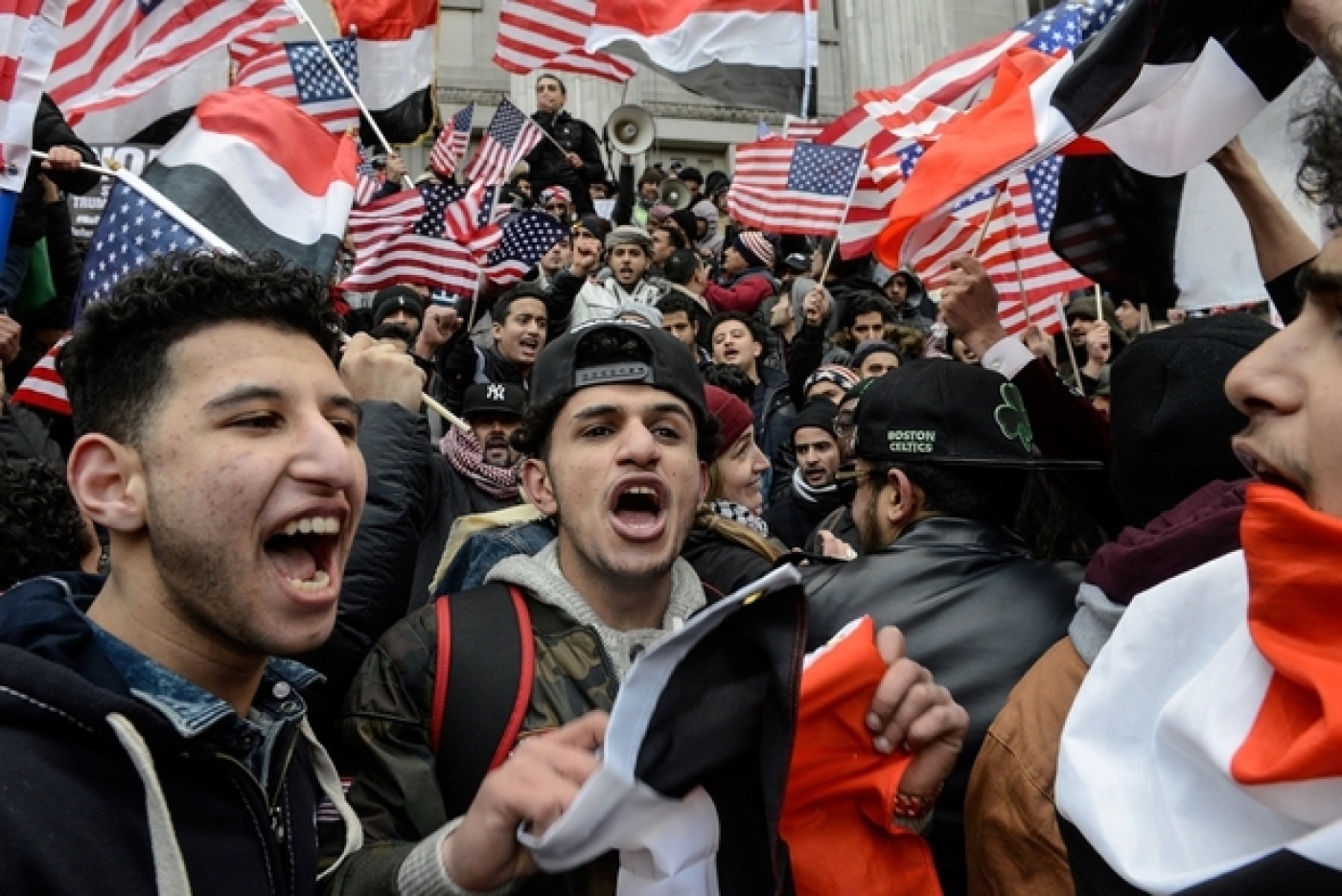 NEW YORK, United States - As a result of US President Donald Trump’s travel ban, the number of human rights campaigners from the Middle East able to visit Washington and New York has dropped sharply, depriving decision-makers there of valuable input, according to former officials and experts.

Activists, lawyers and rights defenders from Yemen, Syria and elsewhere told MEE they were denied US visas and blocked from taking part in United Nations meetings in New York, as well as talks with US lawmakers and officials in Washington.

“I advocate for moving the UN out of New York. It’s a hostile environment," said Rasha Jarhum, a women's rights campaigner from Yemen who was due to address the UN Security Council earlier this month to discuss how women bear the brunt of the ongoing conflict there.

Jarhum’s US visa request was declined and while she ended up speaking via video link, she said she was unable to meet diplomats afterwards or take part in valuable closed-door discussions.

The Security Council claims it is a peacekeeping body, but it is failing in that duty if it is preventing peace-makers like me from speaking at its events

“The Security Council claims it is a peace-keeping body, but it is failing in that duty if it is preventing peace-makers like me from speaking at its events," Jarhum told MEE.

Jarhum, founder of the Peace Track Initiative, said her visa rejection also nixed a planned visit to Washington, where she hoped to lobby US politicians against re-arming Saudi Arabia amid an uproar over the murder of journalist Jamal Khashoggi.

“We need to fix this as soon as possible. It’s not only about Yemen; we have colleagues from Syria, Somalia, Libya, Iraq,” she said.

Noah Gottschalk, a US-based humanitarian policy expert, has arranged visits by scores of delegations from the Middle East and Africa to New York and Washington in recent years, but says visitor flows dried up after Trump’s initial travel ban was enacted in January 2017.

The travel ban has been through various incarnations and legal hurdles since the first controversial executive order. It currently bars travellers from Iran, Libya, North Korea, Somalia, Syria, Yemen and, to a lesser extent, Venezuela, from reaching the US.

US State Department data does not say exactly how many campaigners are being denied entry into the US, but the number of temporary visas granted to visitors from countries under the travel ban plummeted by 86 percent in the first five months of the policy coming into force, the right-wing Cato Institute said in June.

In the past, activists from Syria were able to speak about aid shortages and human rights abuses during discreet chats at the White House, the State Department and in Congress, Gottschalk said.

He said they also shared “very specific details about politics, the impact of checkpoints, territorial control – trends that helped the US better understand the crisis”.

“US diplomats are operating overseas behind walls and fences and can struggle to engage with communities,” Gottschalk told MEE.

“Activists are often followed around by government agents or rebels constantly. So these kinds of engagements in private rooms in Washington are an invaluable loss, and US policy has been impoverished as a result.”

The problem is compounded in New York, he added.

While the US, Britain and Russia have a global web of embassies and consulates, many non-permanent members of the UN's 15-nation Security Council have a limited reach.

“For smaller UN members without embassies all over the world, having the chance to meet an activist in New York can be the only opportunity that government has to understand a situation,” Gottschalk said.

Moving the UN out of New York?

It is “all but impossible” for Middle Eastern activists to attend UN events nowadays, said Ross. Their voices have been "effectively silenced," he said, a situation that has created a “toxic effect”.

“It would help if the UN moved out of the US, but unfortunately we often face similar problems at the [European Union] in Brussels, where it’s also getting harder and harder to obtain visas,” Ross told MEE.

It’s hard to track this decline exactly, because we know that this ban has discouraged many qualified civil society leaders from even applying in the first place

“As a result, diplomats are ever more reliant on simplistic and often inaccurate reports by others of what real Yemenis, or Syrians, or Palestinians, actually think. That undermines effective diplomacy but also, ultimately, the struggle for democracy.”

The spike in visa rejections has also alarmed large aid groups, which seek to amplify the voices of activists at the UN and in Washington.

Anna Tonelli, a policy expert at Oxfam, said colleagues had “increasingly struggled to get US visas” for visitors from travel-ban countries.

“It’s hard to track this decline exactly, because we know that this ban has discouraged many qualified civil society leaders from even applying in the first place,” Tonelli told MEE.

“The voices of activists who work closely with affected communities, and who can best advocate for them, are being shut out, and UN and US policy are the worse for it.”

Massive decline in US non-immigrant visas

The US State Department publishes data on the number of non-immigrant visas issued, which cover tourists, business travellers, diplomats, students and others. Civil society activists typically apply for non-immigrant visas to enter the US as businesspeople or tourists.

That represented declines of 85 percent, 83 percent and 67 percent, respectively.

Iranian citizens were hit even worse, as non-immigrant visa issuances to Iranians dropped from 1,856 to 225 between those two periods – a 91 percent decline.

A US State Department official said the travel restrictions were designed to enhance the “security and welfare” of US citizens, as opposed to the blanket ban on Muslim travellers that Trump touted on the election trail.

“National security is our top priority when adjudicating visa applications, and every prospective traveller to the US undergoes extensive security screening,” the official told MEE, on condition that he not be identified.

“We are constantly working to find mechanisms to improve our screening processes and to support legitimate travel to the US while protecting US citizens.”

We respect the US decision about sovereignty, but as citizens of war-affected countries, we have to have access to the body that makes important decisions about our lives

Still, UN spokesman Stephane Dujarric said he had “not been made aware of any major issues” over visas.

That offered little comfort to Sawsan al-Refaei, who recently attended UN meetings as part of the Yemeni Women’s Pact for Peace and Security.

Two members of her four-person delegation were denied visas, she said, while all of her Libyan colleagues had their visa applications rejected.

One of her colleagues, Suha Bashreen, was forced to make arduous, costly and dangerous trips from southern Yemen to Jordan to process her paperwork at the US embassy in the capital, Amman.

She was left waiting for an answer after nine months and eventually did not go to New York.

“We respect the US decision about sovereignty, but as citizens of war-affected countries, we have to have access to the body that makes important decisions about our lives. We must be able to participate in our own destiny,” al-Refaei told MEE.