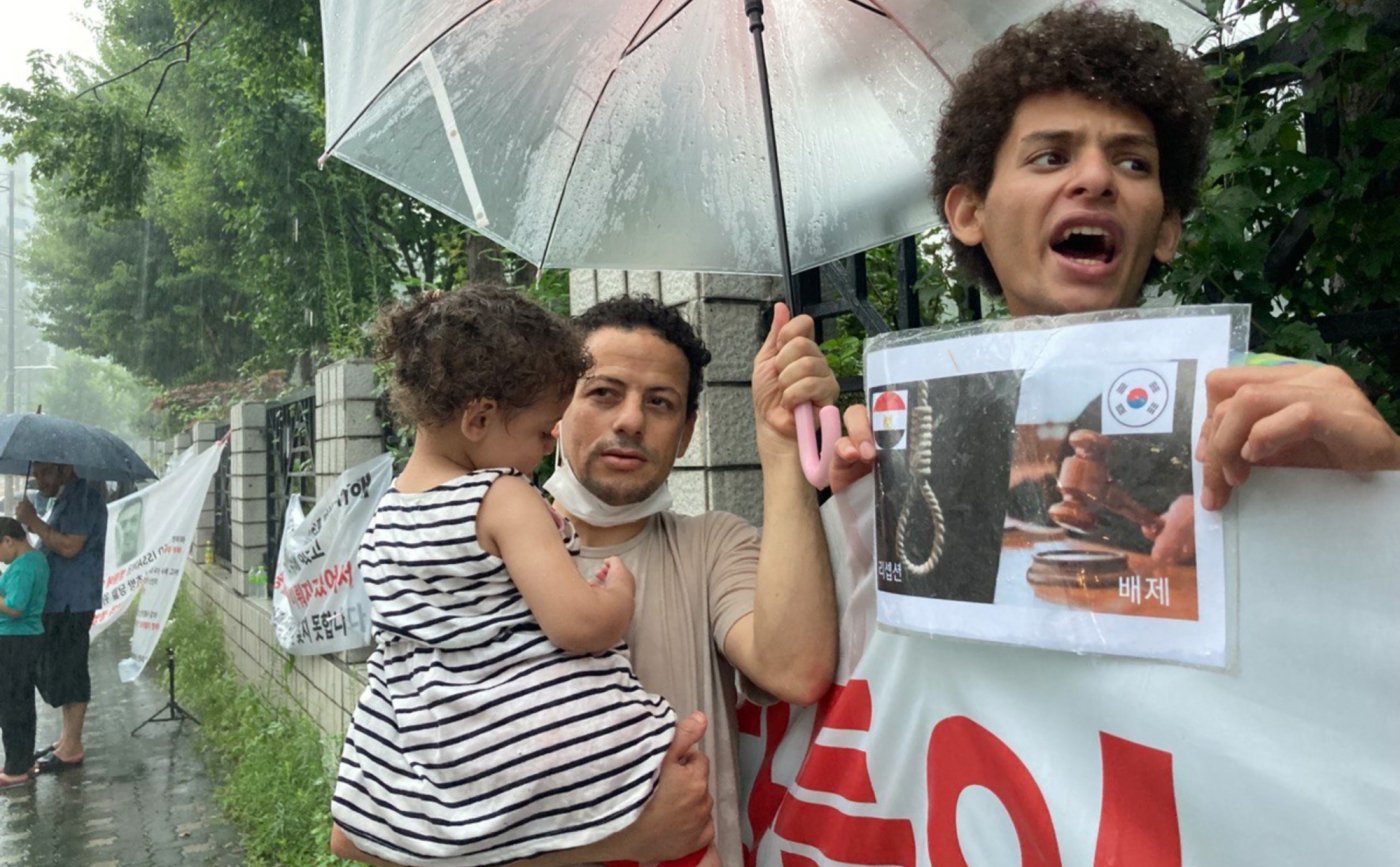 'We cannot even take our children to the hospital when they are sick,' says Hassan el-Mitwalli (MEE/Irang Bak)
By
Irang Bak
in
Seoul

More than 40 Egyptian asylum seekers have for weeks occupied the area outside the South Korean justice ministry, protesting against six years of living in limbo as they await the settlement of their refugee status.

Since 6 July, Egyptian protesters and their families have held a sit-in outside the government complex in Gwacheon, near the capital Seoul, under the scorching heat and pouring rain, hoping to exert pressure on authorities to immediately recognise their status as political refugees.

'We became political refugees because we opposed the military dictatorship. But our rights under international law are being violated here in South Korea'

“We became political refugees because we opposed the military dictatorship. But our rights under international law are being violated here in South Korea,” Mohamed Gomaa Tahawi, a former political activist and an asylum seeker in South Korea, told Middle East Eye.

Fleeing the persecution of opponents of Sisi’s government in Egypt, where tens of thousands are languishing in prison for their political views, these former Egyptian activists sought asylum in South Korea mainly in 2017 and 2018.

However, contrary to their expectations, South Korea did not provide them with protection.

At the sit-in, Egyptians called out the South Korean government for promoting itself as a human rights defender and protector of refugees.

For Tahawi, the treatment of refugees in South Korea tells a different story than Seoul's presentation of itself on its foreign ministry website as a contributor “to global efforts for refugee protection ever since it joined the Executive Board of UNHCR (UN Refugee Agency) in 2000."

“It’s supposed to be the first country in Asia to legislate a refugee law and sign the UN Convention for Refugees. But how are we still not recognised after five and six years of waiting? Do our lives have no value?”

“The immigration office rejected my asylum case on the basis that my sentence has not yet been carried out and that I have not been ‘persecuted’.

“I don’t know what they want me to do. Should I return to Egypt with press cameras to get arrested and killed? Would the Korean government then accept the evidence and recognise my soul as a refugee?”

The prolonged refugee screening process, which often takes several years, is not the only problem. Refugee applicants in South Korea claim that they are suffering from multiple access restrictions to basic human rights.

Asylum seekers are only allowed to be employed in manual labour fields such as manufacturing, construction and agriculture. In the meantime, government support for asylum seekers is practically non-existent.

In 2019, only 609 people - four percent of the number of refugee applicants in South Korea that year - received some form of financial support from the government, according to the Ministry of Justice’s most recent data.

Life as an asylum seeker

Hassan el-Mitwalli, a former lawyer, told MEE that as an asylum seeker, he has struggled to provide healthcare to his children.

“What did our children do wrong? Because we are not recognised as refugees, we are not covered by public healthcare,” he said.

“My daughter suffered from dyspnoea (shortness of breath) due to allergies but we couldn’t pay the exorbitant hospital bill. We cannot even take our children to the hospital when they are sick.”

'We experience racism every time we visit the immigration office. Will the Korean government treat Ukrainian refugees the same way?'

Many Egyptian refugees also live under constant fear of deportation. The vast majority of asylum seekers who had their cases rejected are subjected to resident permit renewals, known as “postponement of departure termination”, every two to six months.

Abdel-Rahman Atef al-Khenany, a former human rights lawyer who was recognised as a refugee last year, described the almost four-year application process as a nightmarish period.

“My passport was about to expire, and I would wake up in fear of being deported back to Egypt every single day,” Khenany told MEE.

“The government is not interested in our mental or physical health whatsoever. And I know Egyptian asylum seekers who had attempted suicide because of this.

“Korea offers no support for the refugees and their integration. Refugees are completely isolated.”

“We experience racism every time we visit the immigration office. Will the Korean government treat the Ukrainian refugees the same way? Is Korea discriminating against refugees based on their nationalities?” he said.

‘They know us by name’

In a letter seen by MEE, the justice ministry responded on 10 August to the protesters’ demands, saying that “inadequate human resources for the refugee cases, the temporary suspension of the refugee interviews due to the pandemic last year” have “contributed to processing delays” in refugee screenings.

“The Ministry of Justice will do its utmost to…enhance its RSD [Refugee Status Determination] system and practices to offer swift protection to those in need of asylum,” the letter read.

The ministry also rejected the claims that the government is discriminating against refugees and Egyptians in particular, insisting that South Korea’s constitution and laws “strictly prohibit any form of discrimination, and no one has been treated unfairly due to their countries of origin”.

The response was met with fury and frustration among asylum seekers.

“For the last five years, every time we ask, the Ministry of Justice tells us to wait. They know us, the political refugees, by our names. This is a deliberate delay and obstinacy,” Mitwalli said of the letter that was addressed to 18 asylum seekers by name.

“We demand immediate recognition. We reject the ministry’s response and we will continue our occupation and protests until our demand is met.”

While Egyptian asylum seekers have been awaiting their refugee status for years with no end in sight, the South Korean government has been enjoying a close relationship with Egypt.

Just this January, South Korea’s then-president Moon Jae-In visited Egypt as part of his official visit to the region, which included Saudi Arabia and the United Arab Emirates.

Following the visit, Moon’s government announced that a $1.66bn arms deal, which would provide Egypt with K9 self-propelled howitzers, had been signed.

'My passport was about to expire, and I would wake up in fear of being deported back to Egypt every single day'

Seoul also maintains a close military relationship with the UAE and Saudi Arabia, the two main sponsors of the military coup that brought President Abdel Fattah el-Sisi to power.

Seoul’s close ties with regional states stand in sharp contrast with its treatment of refugees from the region. According to the National Human Rights Commission of Korea, the asylum acceptance rate last year was a strikingly low one percent.

Meanwhile, at one of the protests held in front of the justice ministry, children of Egyptian asylum seekers read out a letter.

“It’s difficult for us to adjust to Korean society because our parents are not recognised as real refugees. I like school and I want to go to school. Please don’t kill my childhood.” 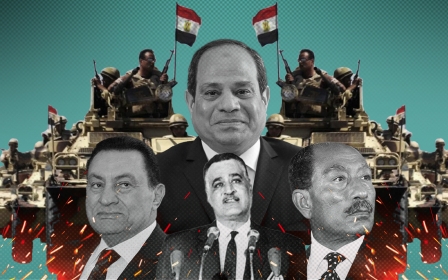