Muslims and migrants in Spain: How fake news is keeping minorities sidelined 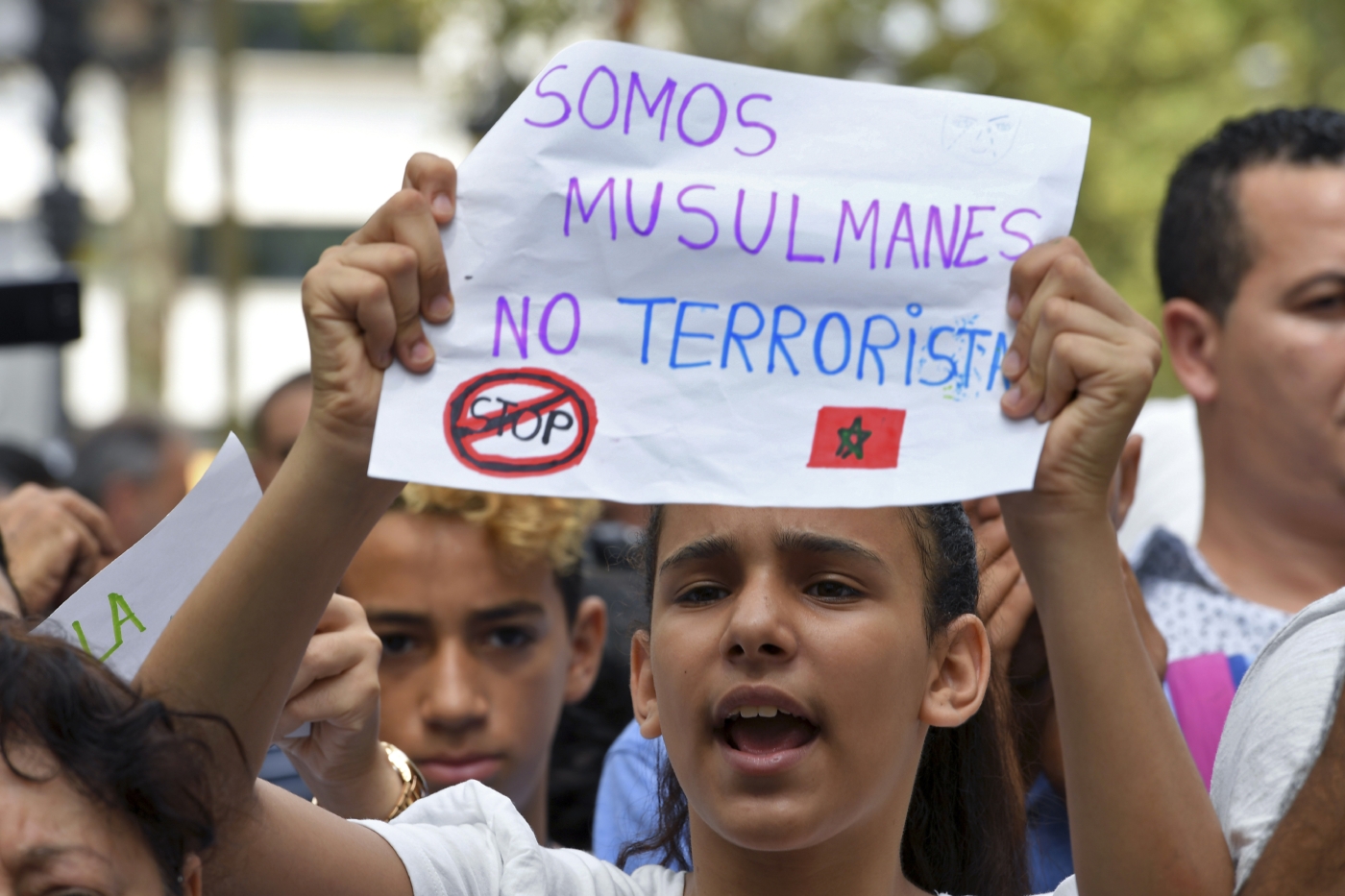 A girl holds a message reading "We are Muslims, not terrorists" as Muslim residents of Barcelona demonstrate against terrorism and in tribute to the victims of the Barcelona attack on 19 August 2017 (AFP)
By
Inigo Alexander
in
Madrid

As a group of young Arab men sail across the Mediterranean Sea in search of a new life in Spain, they bring with them a clear message to their new hosts.

"We are going to cut the throats of all the unfaithful Spaniards who do not praise [Prophet] Muhammad," they seemingly chant as they approach Spanish shores, one of them wielding a small knife.

'Fake news about Muslims in Spain is constant and is closely linked to migration fake news. The most common themes are those linking Muslims to benefits and terrorism'

"He looks very threatening with that knife. This is scary and our politicians are just happy to let them in," one user comments.

"What a disgrace. Can you imagine that later the guy with the knife is one of those who slaughters Christians in a church? We put them up in hotels with full board and if you speak out you're a fascist or a racist," another says.

However, as it soon turned out, the representation of the video's content was fake.

In reality, the video was repurposed and accompanied by an erroneous Arabic translation in order to be peddled online as a tool of hate.

A little research and deft use of a song-identifying app have shown that the young men in the video were in fact singing along to the Algerian hit song Bye Bye Salam.

The video is one of many recent items of fake news that have spread in Spain with the aim of attacking immigrants, predominantly Arabs and Muslims. Among them are false claims, including of 500 boats carrying migrants destined for Spain, mosques breaking social distancing rules to hold prayers, Muslim communities forcibly removing pork from school menus, and illegal Arab immigrants benefiting from the national welfare system.

"Lies about migration try to reinforce four main ideas about immigrants and Muslims: that they're dangerous; that they have privileges when it comes to receiving welfare; that they are going to impose their culture; and that the institutions are going to allow it," says Natalia Diez, journalist and migration fact-checker at Maldita Migracion.

The spread of fake news has coincided with a large rise in immigration. In 2019, Spain saw a record 748,759 immigrants enter the country. Colombians, Moroccans and Venezuelans made up the three largest immigrant nationalities.

"Through disinformation, the foreignisation of Muslims in Spain is reinforced, since most of the fake news about Muslims links them directly with immigration.

"These lies have the clear objective of changing a large part of society's perception of these groups, and they reinforce false arguments that people end up believing."

In recent years, the surge of fake news has become an increasing concern across the globe, and Spain is no exception.

The independent fact-checking organisation Maldita was founded in 2017 in order to combat the rise in misinformation and debunk viral fake news. One of its busiest branches is Diez's migration department.

From 2017 to 2020, Maldita Migracion identified 321 items of fake news related to migration and religion. Of those, 168 were based solely on migration, 129 were linked directly to religion, and 70 percent of the latter exclusively targeted Islam, according to the Disinformation, Religious Minorities and Hate Speech report published last year.

'Fake news towards the Muslim community has a massive pull. It spreads more than any other type'

- Monica Carrion, Observatory of Islamophobia in the Media

"We have seen that fake news towards the Muslim community has a massive pull. It spreads more than any other type," says Monica Carrion, director of educational projects and analysis coordinator at the Observatory of Islamophobia in the Media.

"Bad media coverage affects the entire Muslim community, be it national or of foreign origin. The whole community is harmed by this bad coverage.

"Not only are there attacks online and in the media, but these attacks also translate into physical attacks against the community. That is where the problem lies, which is that Islamophobia endangers social coexistence."

Between 2017 and 2019, immigration had become an increasing problem for the Spanish population, before stabilising over the course of 2020, according to public institute the Centre for Sociological Investigations (CIS).

CIS polling found that the perception of immigration as one of the three main concerns among Spaniards had increased from 3.8 percent in January 2017 to peak at 15.6 percent in September 2019, before dropping to 1.6 percent in June 2020.

Islamophobia on the rise

However, the ministry has been criticised for a perceived lack of commitment to tackling Islamophobia. Upon launching its action plan to fight hate crimes in 2018, the ministry opted not to categorise Islamophobia as a specific hate crime, with the Interior Minister Fernando Grande-Marlaska deeming it "unnecessary". The politics of refusal: How Muslims can resist the West's hostile gaze
Read More »

"The size of the problem is not accurately reflected in the data because they don't usually differentiate between Islamophobia, xenophobia and racism. It's a way for the state to make the limited data they do have invisible," says Spanish-Egyptian activist Aurora Ali, a member of the Muslim Association for Human Rights.

Despite the PCI's report being released four years ago, its findings still formed the basis of the government's 2020 Report on Muslim Discrimination.

Houda Mahdi is one of the two million Muslims who call Spain home, having lived in the country for 13 years. She recalls that ever since she moved to Spain she has been subject to abuse based on her religion.

"I have encountered Islamophobia in many day-to-day scenarios and in all areas: in the workplace, in my academic life or even taking public transport," she says.

According to the government's Observatory for Racism and Xenophobia, 87 percent of Muslims have been discriminated against while finding housing and 83 percent when finding work in Spain.

'I have encountered Islamophobia in many day-to-day scenarios and in all areas: in the workplace, in my academic life or even taking public transport'

"Over the course of the years, it's been getting worse. It happens more and more and Islamophobia is becoming more normalised and tolerated," Mahdi says.

"In Spain today it is increasing in a very, very rapid way thanks to all the people who support it or simply don't stand up to it."

A government report on hate crimes revealed that Moroccans are the most targeted demographic, enduring 7.8 percent of all hate crimes among foreigners in Spain. Moroccans are also six times more likely to be stopped by the police than a white Spaniard, according to municipal police identification protocols.

However, not all Muslims in Spain can relate to Mahdi's experience.

Hamza (not his real name) owns a small fruit shop on the outskirts of Madrid and has been living in Spain for 16 years after he moved from Morocco.

"Luckily I have not had any experience with Islamophobia, but maybe that's because I tried so hard to fit in," he says, as he weighs a bunch of bananas for a customer.

In 1992, the Spanish state struck an agreement with the country's Muslim community in order to guarantee the equal integration and representation of the community within Spanish society.

Over 25 years later, however, the Muslim community has failed to receive many of the basic rights that the agreement was intended to ensure. To date, 90 percent of Muslim students lack religious studies education and 90 percent of Islamic studies teachers are unemployed, contrary to many fake news stories claiming schools were being forced to teach Islamic studies. Additionally, 95 percent of the Muslim communities in Spain still do not have access to a Muslim cemetery and 12 percent have no mosque.

Last week, the far-right party Vox saw its Twitter account blocked for "inciting hate" against Muslims after launching an online campaign under the hashtag #StopIslamisation.

When asked whether she believes Spain's Muslim community is politically integrated, activist Aurora Ali has a clear opinion.

"No, no, not at all," she says, over the phone. "Many Muslims don't even have the right to vote. The left was our only hope, but they have been treating us poorly over the last years. What the Socialist Party and [its left-wing coalition partner] Unidas Podemos have done is deny our Muslim nature."

For progress to be made, Ali believes a representative foundation for the community to build on must be established.

"Change has to come from within national institutions and the existing legislation. If we had legal and legislative backing, all this would probably not be happening to us," she says.

"But currently anything goes against us because we do not have legal protection."