Meral Aksener, a challenger within the Nationalist Movement Party, hailed as possible threat to Erdogan's rule A row within Turkey’s leading far-right party could hold the key to the future of the country and potentially disrupt the continued rule of the governing Justice and Development party (AKP).

On Wednesday the rift between supporters of current Nationalist Movement Party (MHP) leader Devlet Bahceli and supporters of challenger Meral Aksener came to blows during Eid celebrations in a hotel in Ankara.

The celebrations, which were initiated by Aksener, were interrupted by Bahceli supporters who chanted, “The leader of the movement is Devlet Bahceli!”

According to Hurriyet, glasses were thrown by both sides and a number of people were wounded in the fighting, while a gunshot was heard outside of the hotel.

Echoing the conspiratorial rhetoric of Turkish President Recep Tayyip Erdogan, Bahceli claimed that the US-based Turkish preacher Fethullah Gulen had a hand in the disruption.

“According to the information I received, any celebration other than this is a plot recommended by the Fethullah Gulen movement and their effort to put themselves in political and social ground once again.

“We will foil the plot.”

The rise of Aksener within the MHP has proved arguably the most significant new development on the Turkish parliamentary political scene since the emergence of the pro-Kurdish People’s Democratic Party (HDP) in the June 2015 elections.

The MHP lost 40 of its 80 parliamentary seats in elections last year under the almost 20-year leadership of Bahceli. Polls have indicated that should his stagnant leadership continue, the party could end up falling beneath the 10-percent vote threshold needed to enter the Turkish parliament, as they haemorrhage support to the AKP.

Conversely, polls suggest under Aksener’s leadership MHP support could rise above 20 percent, stealing seats from AKP that would undercut the support needed in parliament for a change in the constitution.

“Aksener, for many MHP supporters, is a committed technocrat, committed to actual governance and expanding the party's base with the right-wing of the Turkish electorate,” said Aaron Stein, resident senior fellow at the Atlantic Council's Rafik Hariri Center for the Middle East.

“Aksener is an interesting political case because she is not actually a fresh face or a political insider, but rather a Turkish political lifer.

“Her main strength is that she is not Devlet Bahceli.”

The woman, who has already been touted as Turkey’s answer to Marine Le Pen, could eventually hold the balance of power in Turkey - though the controversial politics of the MHP, which has been labelled “neo-fascist” by some, mean this is unlikely to allay the concerns of Turkey’s allies about the direction of the country.

The MHP was founded in 1969 after former military official Alparslan Turkes - a spokesperson for the 1960 military coup - took control of the Republican Villagers Nation Party and rebranded it the MHP, bringing it more in line with his ultra-nationalist, anti-communist views.

Though the MHP, and its paramilitary and youth wing the Grey Wolves, have long targeted (both verbally and physically) what they see as subversive elements within Turkish society - including leftists, Armenians, Jews and Alevis - the primary focus of their campaigning since the 1980s has arguably been Kurdish nationalists, in particular the Kurdistan Workers Party (PKK).

Despite the damning polling evidence, Bahceli - a veteran of the political violence of the 1970s - has clung on to the leadership. Many have even accused him of forging links with Erdogan and the AKP in order to undermine his challenger.

On 15 May, MHP dissidents attempted to force an extraordinary congress in Ankara in the wake of the MHP’s poor result in the November elections, a move that was denounced as “illegal” by Bahceli and the leadership.

When delegates tried to enter the venue for the congress, they found their way blocked by police. In the end, they were unable to hold the congress.

Undeterred, the dissidents successfully held another congress - this time overseen by a court-appointed board of trustees - on 19 June at which they claimed 659 delegates voted in favour of holding a congress to elect a new leader. The congress was again condemned as "illegal" by Bahceli, who claimed less than 500 delegates had attended, below the required amount.

“Since 85 percent of the party delegates attended the first rebel congress, he has clearly lost his grassroots support," said Turkey analyst Ankarali Jan.

He told Middle East Eye that the mounting opposition to his rule had already led him to purge dissidents within the regional parties.

“In some cases he has simply closed the entire branch structure in a province and started again.”

Devlet Bahçeli, in his bayram message, announced it was "purging season": it began with 5 provinces purged today pic.twitter.com/L1eXkeSsxp

Due to complex constitutional laws on political parties implemented by the military coup government in 1982 - in the interest of national stability - it is very difficult to change party leaders in Turkey and the central government and judiciary have a lot of influence over the process.

At another emergency MHP congress held on 10 July, delegates voted in favour of changing the party rules allowing a challenge to the leadership.

Following the vote, however, Turkey's High Electoral Council - which monitors all elections in Turkey -  said it would neither count nor recognise the vote.

Some have even accused Bahceli and Erdogan of - either tacitly or directly - colluding to undermine the rebels, citing Bahceli's support for Erdogan's presidential system. The anti-Bahceli faction in the MHP accused the AKP outright of having intervened to shut down the 15 May congress, saying that the "internal matters of the MHP have become a matter of the AKP and the government". The dissidents claim double standards, pointing out that a party "changes a prime minister [Ahmet Davutoglu] in just one hour and takes a decision for its own snap congress in just two hours, has trampled on the law to deprive the MHP from having its own snap congress”.

Aksener has claimed that the alleged attempts by the AKP to shut down the party congresses show that Erdogan and his supporters feel threatened by her challenge.

“For a very long time, the president has been trying to shape the opposition parties, especially the CHP [Republican Peoples' Party] and the MHP, which is why the opposition is not strong. This will change,” she said in an interview, according to Politico.

“That’s why I am not only competing with the candidates of my party, but also with the president and the prime minister."

Though the AKP and MHP failed - despite the predictions of many observers - to form a coalition following June 2015's indecisive parliamentary elections, should the leadership of the MHP eventually be changed the party could end up exerting a huge influence on Turkish politics in future.

“Aksener has promised to play hardball with the AKP on the constitution, and therefore has advocated for the MHP being an indispensable negotiating partner with the AKP. I doubt she would cave on the party's opposition to the presidential system, but instead push for MHP-style language in a new document,” said Stein.

Most worryingly for observers of the violence raging in the country's southeast and growing xenophobia (including against Syrian refugees), such a development could see tensions increase in an already fragile society.

The MHP staunchly opposed the PKK peace process launched by the AKP government and have long called for a tougher military response in the southeast. They have also consistently accused the HDP of being a front for the PKK and have called for harsh measures against the party.

Although Aksener herself has been hailed as a moderating influence by some commentators, she has still been responsible for statements reflecting a hardline nationalist view.

In 1996, while Interior Minister, she attacked the leader of the PKK Abdullah Ocalan in the parliament as "Armenian semen".

When asked to clarify the remark, which appeared to reflect the popular far-right conspiracy theory linking the PKK to Armenia, she said the comments "did not refer to the Armenians living in Turkey," but rather "referred to the Armenian race in general".

She also promised to make no compromises with regards to the Kurdish insurgency in the southeast, claiming she would "break the back of terrorism" in six months.

All depends, however, on the leadership battle, which is still very much up in the air and then forcing the notoriously authoritarian Bahceli to actually step down.

"The rebels will probably take it to the courts," said Jan, the analyst.

"If the courts allow them to, they will have another rebel congress and elect a leader (almost certainly Aksener)".

"Then there will be two leaders both claiming legitimacy." 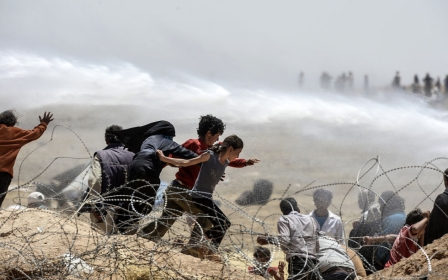