State of emergency in Iraq as protesters storm parliament Supporters of Shia cleric Muqtada al-Sadr enter the Green Zone in Baghdad on 30 April, 2016 (AA)
By
MEE and agencies

Thousands of protesters have stormed the Iraqi parliament as anger at the country's political crisis and faltering anti-corruption measures boiled over, leading the Baghdad government to declare a state of emergency.

Supporters of the Shia cleric Muqtada al-Sadr stormed the heavily enforced Green Zone in Baghdad on Saturday chanting “Victory to Iraq!” and calling for corrupt ministers to be removed from office.

Protestors enter Iraqi Parliament building and other areas in the International Zone pic.twitter.com/jNPiyn8aKZ

Footage showed thousands of angry protesters moving into the restricted area, which houses the country's key government institutions, and some began ransacking the parliament building.

Protesters were shown pelting cars believed to be transporting ministers with stones.

“This is a new era in the history of Iraq!” shouted one demonstrator in the main lobby of the parliament.

"They have been robbing us for the past 13 years!" said another one.

Rioters rampaged through several parts of the building while other protesters shouted "Peacefully, peacefully!" and tried to contain the destruction.

A protest held outside the Green Zone escalated after parliament again failed to reach a quorum and approve new ministers to replace the current government of party-affiliated ministers.

The Rudaw news agency also claimed that Baghdad's airport had been blockaded by protesters in an attempt to prevent corrupt MPs from fleeing the country.

Though rumours had spread on social media that Prime Minister Haider al-Abadi had fled the city, he was later quoted by the Sharqiya TV channel as saying he had allowed the protesters to enter the Green Zone on condition that they protested "peacefully".

The unrest kicked off minutes after Sadr ended a news conference in the holy Shia city of Najaf during which he condemned the political deadlock but did not order supporters to enter the Green Zone.

"You are not staying here! This is your last day in the Green Zone," shouted one protester as thousands broke into the area in central Baghdad that houses parliament, the presidential palace, the prime minister's office as well as the American and other embassies.

Protesters pulled barbed wire across a road leading to one of the exits to the Green Zone, effectively preventing some politicians from fleeing the chaos.

Several vehicles the protesters believed belonged to MPs were attacked and damaged, according to reports from the scene.

Iraq has been hit by weeks of political turmoil surrounding Abadi's efforts to change the government.

Both Washington and the United Nations have warned the crisis could distract from the fight against the Islamic State (IS) group, which carries out frequent bombings against civilians.

At least 23 people were killed and 38 wounded earlier on Saturday in a car bombing that targeted Shia pilgrims in an area near Baghdad. No one has claimed responsibility for the attack. 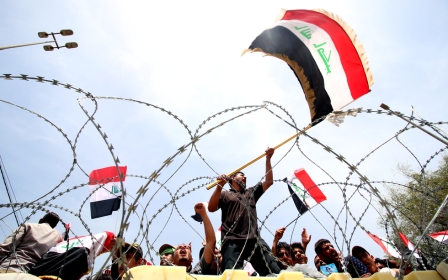