Sudanese journalists have launched a three-day strike in support of ongoing protests against the rule of President Omar al-Bashir, which Sudan's government said on Thursday have left at least 19 people dead since they broke out this month.

Nineteen people have been killed in the demonstrations, including two members of Sudan's security forces, while 219 others have been wounded, government spokesman Boshara Juma said on state television, as reported by AFP.

The Sudanese authorities had previously said that eight people were killed in clashes, while Amnesty International put the death toll at 37.

The protests began in the northeastern town of Atbara on 19 December in response to economic hardships and rising living costs.

They have since spread to more than a dozen Sudanese towns and cities, including to the capital Khartoum, where large crowds have gathered to demand that Bashir step down after decades in power.

A Sudanese protester was shot dead by security forces in downtown Khartoum on Tuesday, medical sources told Middle East Eye. The sources said dozens of people were hurt by live fire, tear gas and rubber bullets, which were fired on protesters as they tried to reach the presidential palace.

On Thursday, the Sudanese Journalists' Network said it was striking in solidarity with the protesters.

"We declare a three-day strike from December 27 to protest against the violence unleashed by the government against demonstrators," the network said.

Members held a sit-in outside the office of independent newspaper Al-Tayar and security agents took away eight of the journalists to an undisclosed location, the paper's editor, Osman Mirghani, told AFP.

A journalist among those reportedly detained said he and the others were quickly released, the news agency reported.

Journalists said they were also protesting against regular confiscation of newspapers by security agents and beatings and arrests of media workers covering demonstrations.

While various groups across Sudan have called for the protests to continue, Egypt voiced its support for Bashir on Thursday.

"Egypt is always ready to support Sudan and the ability of Sudanese people as per the government of Sudan's vision and policies," Shoukry told reporters after he met Bashir at the presidential palace in Khartoum.

His comments were the first remarks by a top regional Arab official in support of Bashir's government since the protests began.

That showing of support for Bashir hasn't deterred Sudanese opposition groups from asking people to keep going out into the streets, however.

"We urge the Sudanese people to continue their demonstrations until success is achieved by overthrowing the regime," the Sudanese Communist Party said in a statement.

The resignation by the province's health minister, Abdarouf Grnas - from the Umma Reform and Renewal Party - is the first by a notable official since the deadly protests erupted.

"We have one minister in North State and we decided to withdraw him because of the violence against protesters," party head Mubarak El Fadiel told AFP.

For his part, Bashir has sought to dismiss the unrest, telling citizens on Monday to ignore "attempts to instil frustration".

"Some mercenaries serving the agendas of our external enemies are exploiting the lack of some commodities to sabotage our country," he said in another speech this week, delivered in al-Gezira state in central Sudan. 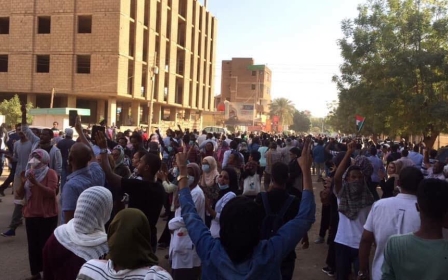