The sultan of swing votes: 24 years of Erdogan in office

Imprisonment, constitutional change and an attempted coup: Turkey has seen it all under the rule of the newly sworn-in president 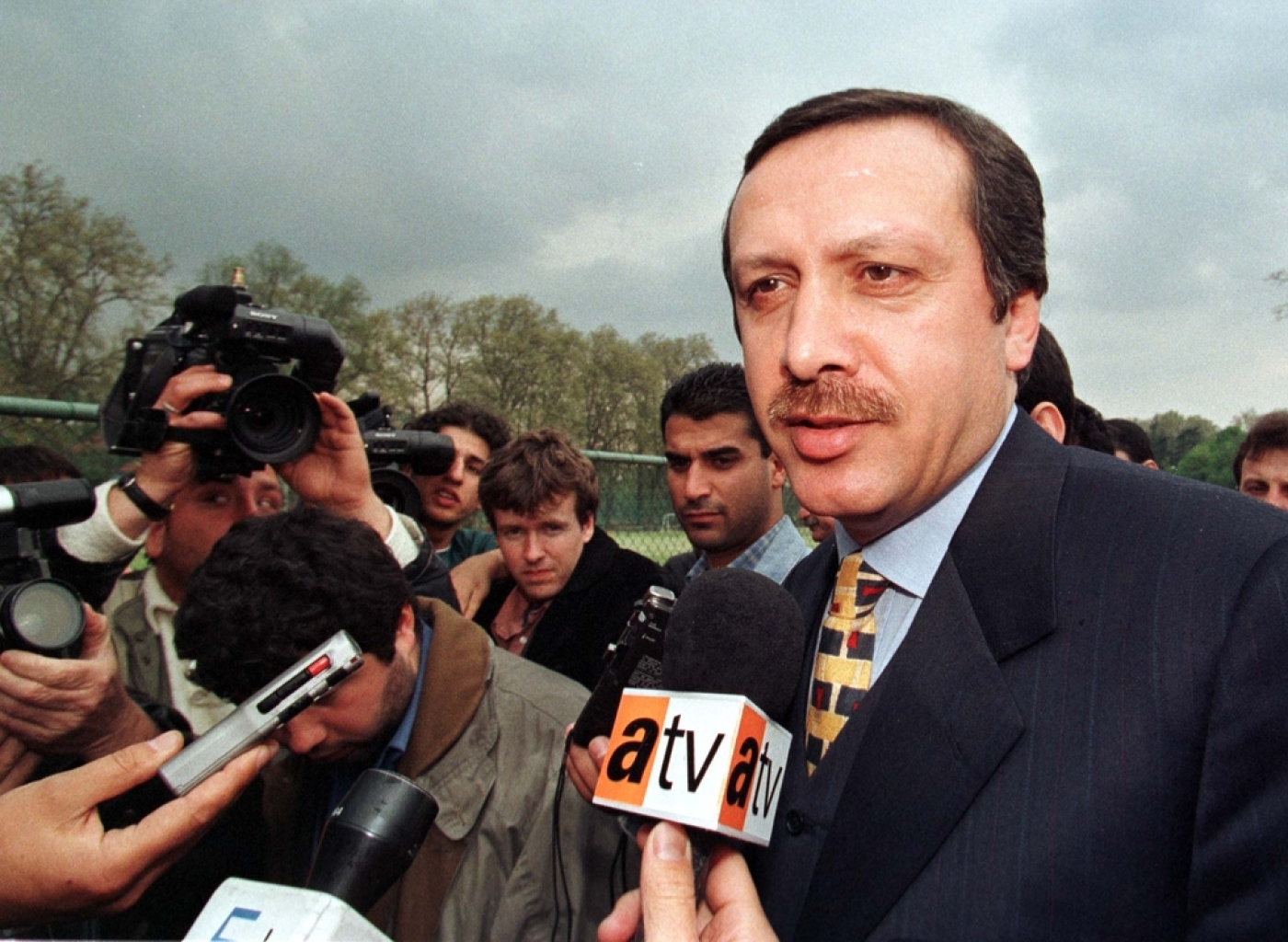 Recep Tayyip Erdogan, then mayor of Istanbul, is mobbed by journalists while he inspects a public park on 21 April 1998 (Reuters)
By
MEE staff

From mayor of Istanbul to all-powerful president of Turkey, Recep Tayyip Erdogan has made a lasting and historic impact on his country. Here is a breakdown of his political journey, from 1994 until today:

Erdogan is elected as mayor of Istanbul, the biggest city in Turkey, as the conservative Welfare Party’s candidate with 25.19 percent of the vote. He had been active in the party since he was a teenager, and had run in the parliamentary elections twice before the local elections in 1994.

Erdogan goes to jail for four months on charges of “provoking hatred and animosity by discriminating people based on their class, ethnicity, religion, sect or region” after reading a controversial poem by a conservative writer at a rally in late 1997. He was found guilty and banned from politics in April 1998 and resigned his post as mayor soon after, at a time when conservative religious politicians were banned from politics.

Erdogan founds the Justice and Development Party (AKP). His Welfare Party was previously banned from politics in 1998, so he starts to work on establishing his new party while he is in jail. He founds his party with a group of people who call themselves “reformists” and a number of moderate right-wing politicians that split from the Welfare Party’s successor.

He becomes prime minister of Turkey. Erdogan’s AKP won the elections in November 2002 with 34 percent of the vote, but he was still banned from politics. However, after parliament changed the law behind the political ban, the former Istanbul mayor became an MP on 9 March, more than four months after his party won the elections. Five days later, he formed a new cabinet and took his post as PM.

The army publishes a memorandum on its official website urging the ruling AKP to act in accordance with the norms of secularism. It is Erdogan’s first big challenge from the army. In the next elections in July, however, his party wins 47 percent of the vote and is re-elected.

The prime minister leaves the Davos Economic Forum after a clash with Israel’s President Shimon Peres over Israeli attacks on Gaza. He is welcomed by hundreds of supporters at Istanbul airport when he returns to Turkey.

As the Syrian uprising spirals into a full-blown civil war, Erdogan urges President Bashar al-Assad to carry out reforms and stop the violence in the country. It is the turning point of his Syria policy.

Thousands of protesters gather in Istanbul’s famous Gezi Park to demonstrate against Erdogan, his construction plans in the site and his broader policies. The protests then spread to other parts of Turkey, continuing for a couple of weeks. Erdogan calls the protesters “terrorists” and the demonstrations are quelled after a crackdown by the police.

State prosecutors start an investigation into four AKP ministers and some of their relatives over accusations of bribery and corruption on 17 December. After a week they expand the investigation and include Erdogan’s son Bilal. Linked to Erdogan foe Fetullah Gulen, the premier calls the prosecutors terrorists and eventually they are dismissed. He reshuffles the cabinet, excluding all ministers who had links with Gulen, but protecting some of those accused of bribery.

After a change in the constitution, Turkish citizens go to the polls for the first time in their history to elect a president. Erdogan gets 52 percent of the vote and becomes the first popularly elected president of Turkey. According to the law, he has to cut all his formal links to his party as an impartial president.

For the first time in the AKP’s history, the party fails to secure a majority in parliamentary elections. Erdogan doesn’t appear in public for three days and then calls on the AKP chairman to form a coalition government. Political parties aren’t able to agree and form a coalition government, so Turkey goes back to the polls November, with the AKP securing 49 percent of the vote. In the meantime, the peace process with the Kurdistan Workers’ Party (PKK) ends after two and a half years of a ceasefire, Turkey strikes Islamic State group (IS) positions in Syria for the first time, and IS and the PKK stage bomb attacks across the country.

Military officers attempt a coup to overthrow Erdogan and the AKP government while the president is on holiday. He calls his supporters to the streets to resist the coup attempt on a Facetime call with an anchorwoman on a popular Turkish local TV channel. The coup attempt is defeated and a state of emergency declared, with tens of thousands of alleged Gulen supporters arrested or dismissed from their jobs in the army, police, and other public services.

After a referendum in April which changes Turkey’s ruling system to a presidential one, Erdogan is legally free as president to belong to a political party. In the first party congress after he re-joins the AKP he is again elected as the leader of the party.

Erdogan is re-elected as president with 52.6 percent of the vote in snap elections. Following the new polls, Turkey shifts to a new political system, and Erdogan assumes greater powers as the head of legislative and executive branches.