UK citizen and six Germans, all suspected of being involved with IS, were also deported on Thursday Turkey says the United States has agreed to take back a suspected member of the Islamic State (IS) group, after the American citizen was stranded on the Turkish-Greek border for several days.

In a statement on Thursday, the Turkish interior ministry said the suspect, a US citizen of Jordanian descent, would be sent back to the US.

The man is accused of travelling to Syria to join IS.

"The US government has committed itself that it would grant entrance and prepare travel documents for the said individual," the ministry said, adding that the deportation process was underway.

Six Germans and a UK citizen were also deported on Thursday and have already boarded flights home, according to AFP news agency.

Ahead of a meeting of the Global Coalition to Defeat ISIS in Washington on Thursday, US Secretary of State Mike Pompeo highlighted the importance of repatriating suspected IS fighters for prosecution.

"We must make sure that ISIS never again flourishes," Pompeo said, using a different name for IS.

"That work begins with carrying out justice against those who deserve it.  Coalition members must take back the thousands of foreign terrorist fighters in custody and impose accountability for the atrocities that they have perpetrated," Pompeo said.

The US Special Representative for Syria Jim Jeffrey later on Thursday said members of the coalition had a "difference of opinion" regarding the repatriation of IS fighters.

"There was some difference of opinion on whether they should be repatriated or whether that should be something that countries are still going to look at and think about in more detail, but nonetheless, that is acknowledged as a significant problem," Jeffrey said at a news conference on the sidelines of the meeting.

The US had initially refused to receive the American man in question, leading the Turkish government to attempt to send the man to Greece, only for the Greek authorities to refuse him entry on Monday.

He has since been trapped in no-man's land between the Turkish and Greek borders near Turkey's northeastern province of Edirne.

Local media reports said that since Monday the man has been kept in a minivan located in the buffer zone between Turkey and Greece, with Turkish authorities giving him care.

Earlier this week, the US embassy in Ankara said that amid legal limitations they could not confirm or deny that the said individual was a US citizen.

Middle East Eye has not independently verified the man's identity or nationality.

There was an apparent breakthrough in his case on Thursday, following talks between US President Donald Trump and Turkish President Recep Tayyip Erdogan, which led to Washington's approval for deportation proceedings to begin.

'We will continue to send them'

Turkey has criticised Western countries for not taking back captured members of IS, and has recently publicised its efforts to deport suspected IS members back to their countries of origin.

Erdogan said in televised remarks on Tuesday that Turkey does not care whether or not IS members get trapped in buffer zones. “We will continue to send them,” he said.

Turkey's Hurriyet newspaper said on Wednesday that 959 suspects were being prepared for deportation, with the largest numbers coming from Iraq, Syria and Russia, AFP reported.

The Turkish interior ministry on Thursday said that seven Germans and one Briton were being deported to Berlin and London respectively, according to AFP.

Six of the Germans, including four women, were put on a plane to Berlin on Thursday, Turkey's DHA news agency reported.

The Metropolitan Police in London said on Thursday that a man was arrested on terrorism offences after arriving at Heathrow airport on an inbound flight from Turkey, AFP reported.

"He was arrested on suspicion of preparation of terrorist acts," the police said in a statement. "The arrest is Syria-related," it added.

Concern over the continued imprisonment of thousands of suspected IS fighters increased last month after Turkey launched an incursion into northeast Syria, where many of the captured IS fighters and their families are being kept under the protection of the Syrian Democratic Forces (SDF). 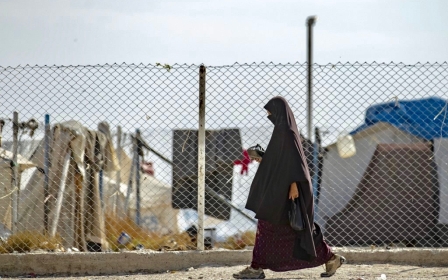