At least 40 people have been killed after a bomb exploded in the northwestern Syrian town of Afrin.

According to the Syrian Observatory for Human Rights activist group, the blast happened when an "explosive device inside a fuel truck exploded in a market".

The governor of Turkey's border province of Hatay said Turkish forces have captured a person suspected of driving the truck to the targeted area.

A video shared by the Turkish defence ministry showed black smoke billowing in the air while police and ambulance sirens sounded:

The ministry said at least 40 civilians were killed, including 11 children, in the blast.

It blamed the attack on the pro-Kurdish Peoples Protection Units (YPG), who controlled Afrin until March 2018, when they were driven out by Turkish-backed forces.

"The enemy of humanity PKK/YPG has once again targeted innocent civilians in Afrin," the Turkish ministry said.

The PKK has been waging a bloody insurgency in Turkey for three decades.

Tuesday's blast was one of the deadliest to hit a region under the control of Turkish-backed forces.

Ankara frequently blames the YPG for the attacks, while the militia says it does not target civilians. 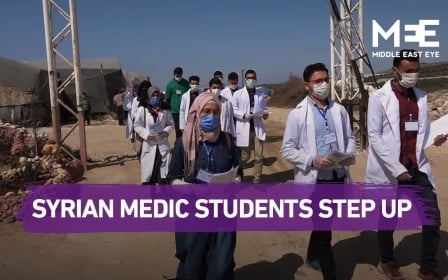