Fate of hundreds of minors held hostage by IS unclear, following a week of ferocious battles The Syrian Democratic Forces (SDF) militia said on Wednesday it had seized full control over Hasakah’s al-Sinaa prison after the “surrendering of all Daesh [Islamic State group] terrorists”.

However, it is unclear what has happened to hundreds of minors held hostage in the prison. MEE understands that thousands of detainees are surrendering.

Fighting first engulfed the prison on Thursday, when Islamic State (IS) fighters rammed two vehicles packed with explosives into the facility, in one of the boldest attacks by the group in the region in recent years. Fighting around the prison, which is thought to have housed more than 3,500 suspected IS members, is reported to have left hundreds dead. More than 700 minors, who were rounded up as IS collapsed in 2018-19 and were also held in the prison, were reportedly being held hostage by IS fighters. The SDF has not disclosed whether the hostage situation is continuing.

"Through a precise operation, we were able to reach these blocs and surround IS militants who were using these minors as human shields, which is one of the reasons behind the delay of our operation," SDF spokesman Farhad Shami told Middle East Eye.

The minors, he said, are aged between 10-17 and "have been trained on the jihadi ideology", though some were undergoing a rehabilitation programme.

"I don’t have information on their condition yet, but, naturally, seven days of this ordeal will have an impact on their psychological state."

Clara Moore, a Syria-based researcher at the Rojava Information Center (RIC), told MEE: "This incident underscores [that] a different way of housing minors in the justice system is necessary, but the AANES [Autonomous Administration of North and East Syria] and SDF still have severe material constraints. Due to lack of resources the prison itself was not custom built. It was a retrofitted dormitory which the SDF continually stressed was a security concern."

Moore added: "The inside of the prison has been a black box for the last few days. As far as we know there were around 650 minors inside, and anecdotal and photographic evidence has confirmed what observers feared most: that minors were among the injured and potentially the dead."

Aziz Suleiman, a resident in Hasakah's Salihiye neighbourhood who is closely following the siege, told MEE the hostage situation had not yet been resolved.

"The children are still [in the previous situation], but there are talks going on for their release. There is a small group [of IS fighters] who are keeping the children with them. I believe that in the coming hours they will also be released. Because they don't have a space or any option, they will surrender themselves to the security forces," he said.

'There are some radical ISIS fighters who refuse to surrender. They kept fighting'

Earlier on Wednesday, the SDF media centre said the number of “terrorists forced to surrender has risen to about 1,000”. It added that large-scale sweeping operations were being carried out in many areas of Hasakah, Deir ez-Zor and Raqqa provinces.

Major General John W Brennan, Jr., commander of the international coalition fighting IS, hailed the SDF's advance. He warned it shows that the status quo of keeping IS suspects, both foreign and local, in Kurdish detention was untenable.

"This is a global problem that requires many nations to come together to develop an enduring long-term solution. The makeshift prisons throughout Syria are a breeding ground for Daesh’s  failed ideology. We must thoroughly investigate the circumstances that allowed this attack to happen."

Around 45,000 people have been displaced by the fighting, with several families being forced to sleep on the streets in freezing temperatures. With relief organisations' local operations suspended due to the security threat, little aid has been forthcoming.

Khalid, 39, has lived in Hasakah for two years and aftern being displaced from Serekaniye, also known as Ras al-Ain on the Turkish border.

"Up until last night there were clashes. In the neighborhoods of Ghewiran, Hush al-Bar and Hay az-Zohour, they still have their cells," he told MEE.

"The people displaced from the fighting areas have been relocated to other parts of the city. The SDF evacuated them, and gave them space to stay, and they are also providing water and food. The Kurdish Red Crescent (KRC) staff are also here, they provide medical treatment and milk for the babies."

On Tuesday, the SDF said it had recaptured 550 prisoners and taken most cells. Khalid said most IS have surrendered.

"But there are some radical ISIS fighters who refuse to surrender. They kept fighting, and their cells made movements. That's why combing operations are still ongoing in the area."

Heba Nasser contributed to this report. 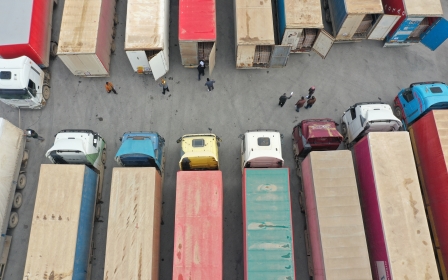