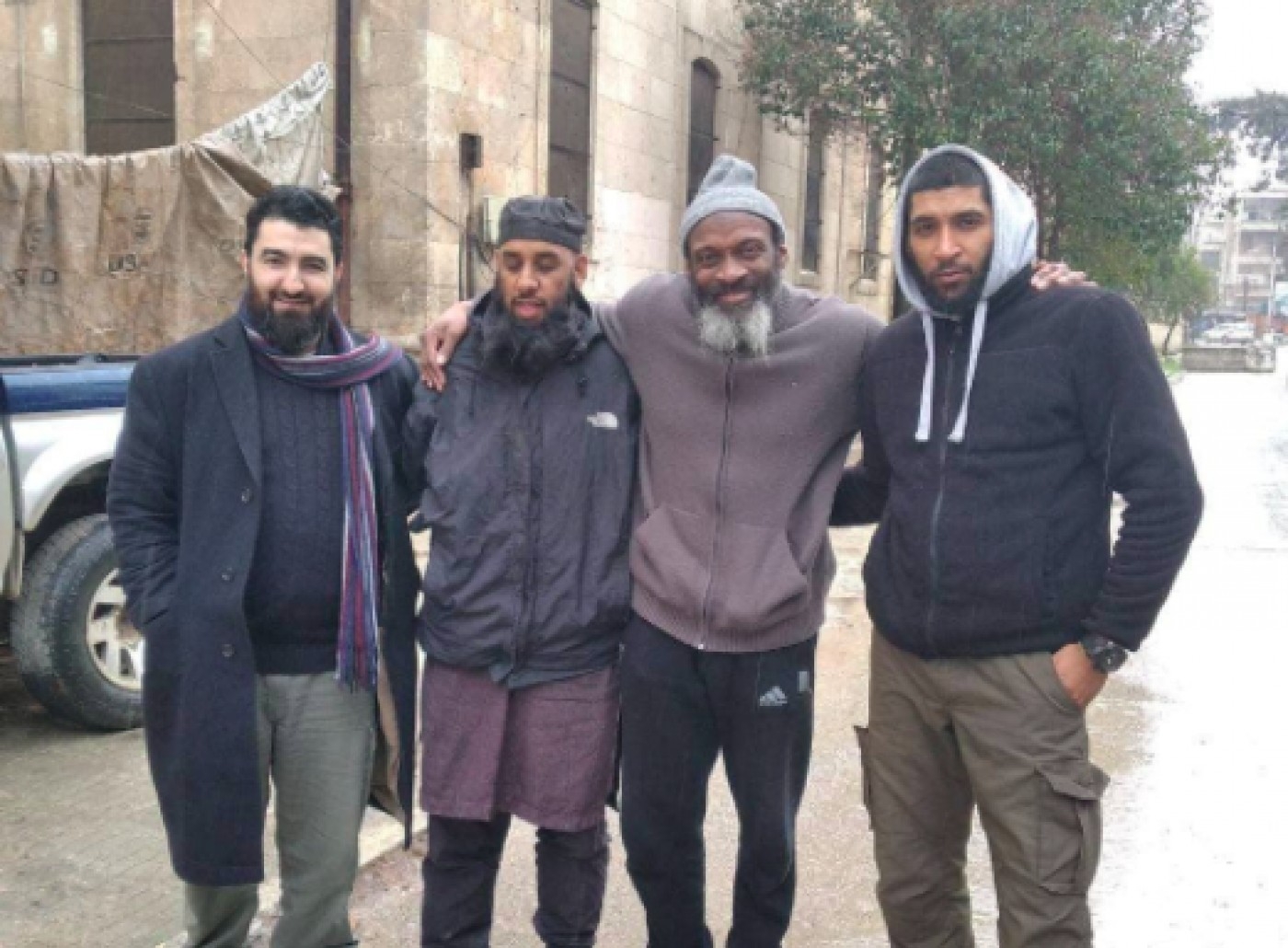 Bilal Abdul Kareem (second from right) was freed after HTS held him for six months following his reports on the treatment of Tauqir Sharif (right), a British aid worker (Supplied)
By
Areeb Ullah
, Harun al-Aswad

HTS detained Abdul Kareem in August after he reported on allegations that the militant group tortured detainees inside its prisons.

Abdul Kareem is a Middle East Eye contributor who has been in opposition-controlled Syria since 2014. His detention followed a string of arrests by HTS of aid workers and journalists in Idlib province and its environs.

Moazzam Begg, the outreach director for UK-based human rights group CAGE, campaigned for Abdul Kareem's release and spoke to him after he was freed.

"Bilal is fine and doing well. He is in good health and remains upbeat," Begg told MEE.

'He is heading to a reception in one of the mosques, where he will be welcomed back into his household and meet his newborn daughter. People have missed him a lot'

"He is now heading to a reception arranged for him in one of the mosques, where he will be welcomed back into his household and meet his newborn daughter. People have missed him a lot."

Activists suspect Abdul Kareem was detained after he criticised HTS's treatment of Sharif on his news channel On the Ground News (OGN).

HTS said it had released Abdul Kareem after he was charged with "working with groups that harm public security" and "incitement" against the militant group.

It also charged the US journalist of "publishing and promoting lies that affect institutions without evidence or proof".

HTS said Abdul Kareem’s sentence was reduced to conditional release after it accepted a petition submitted by elders from the Atmeh region.

"After consideration of the matter, the court accepted the application on the condition of compliance with the conditions of public affairs and military activity," HTS said in a statement.

It remains unclear, however, what conditions HTS set on Abdul Kareem's release.

Earlier this month, the Committee to Protect Journalists (CPJ) had called for HTS to release Abdul Kareem. Ignacio Miguel Delgado Culebras, the Middle East and North Africa representative for the New-York based group, told MEE that the CPJ was "very concerned" for Abdul Kareem's safety.

OGN said Abdul Kareem was abducted in the Syrian town of Atmeh and taken to an unknown location by HTS members.

His stepson, Jihad, later told OGN that Abdul Kareem had finished praying at a mosque near Atmeh when he and a cameraman were approached by two cars of armed men.

"Abdul Kareem tried to flee, but they pointed their guns at him. I ran away, and they were unable to arrest me. They beat them severely and handcuffed them," said Jihad.

Abdul Kareem's work has been featured by media networks including the BBC, CNN and Sky News.

He is best known for his reports from the final days of the battle for Aleppo in December 2016, when he remained with opposition fighters under bombardment and was transported with them out of the city's eastern neighbourhoods as part of a ceasefire deal.

The journalist previously said he feared execution at the Syrian government's hands over his coverage of the country's civil war.

He also alleges that he was erroneously placed on a US "kill list" and was targeted by US missiles on multiple occasions in 2016.

The allegations are currently the subject of a legal challenge in Washington brought by Abdul Kareem against the US government.