Families demand repatriation of all foreign nationals from Syrian camps Western governments are facing growing pressure to repatriate their own nationals held in dangerous and overcrowded camps and prisons in northeastern Syria after being swept up in fighting between Kurdish-led forces and Islamic State (IS) militants.

A newly formed international network linking together relatives of some of those detained will this week call on countries to take responsibility for thousands of foreign nationals, the majority of them young children, stranded in the region after the collapse of IS early last year.

The network, Families for Repatriation International (FRI), will highlight the “dire and life-threatening conditions” that have already led to hundreds of deaths, and warn that governments' continuing failure to act risks undermining human rights, global security and the rule of law.

The network brings together family members of foreign nationals held in Syria and family support groups and is being backed by human rights organisations and lawyers involved in legal cases on behalf of those in detention.

Family members from five countries - Canada, Belgium, Germany, Australia and the UK - are currently working together in the network, and others in a number of other countries have also been in discussions with the group.

Members of the network told Middle East Eye that they were choosing to remain anonymous at this point in order to protect themselves and their relatives in Syria.

“It took a lot of courage for many of these family members to join an international coalition,” Letta Tayler, a senior researcher at Human Rights Watch, which is supporting calls for repatriations, told MEE.

“They fear being harassed or stigmatised because they have relatives detained in northeast Syria. But they rightly understood that remaining silent only makes it easier for their governments to ignore the plight of their citizens held in appalling conditions that get worse with every passing month.”

The launch of the network comes as more than 150 academics from universities across Europe and the US accused European countries of “outsourcing” responsibility for their own nationals and “creating spaces outside the law”.

In an open letter published by MEE on Monday, the academics said that a “controlled and coordinated repatriation” was the “only sustainable and durable solution”.

About 3,000 women and 7,000 children in the camps are foreign nationals, while about 2,000 foreign men are detained in prisons among suspected IS fighters, according to Kurdish authorities.

A few countries, including Russia, Kazakhstan, Kosovo and Bosnia-Herzegovina, have so far repatriated significant numbers of their own nationals.

But most Western nations, including European Union member states, Canada and Australia, have repeatedly rejected calls to do so, with the exception of a few cases in which mostly orphaned children have been evacuated from the camps on humanitarian grounds.

“Western governments have been allowed to get away with blatant disregard for international law for too long,” a Canadian mother involved in the network told MEE, speaking on condition of anonymity.

“By forming FRI - an international network of affected families who are advocating for justice, compassion and the rule of law - citizens across several countries are having to do the work that their governments should be doing.”

Many governments, including in the UK, Belgium, Germany and Canada, are facing mounting legal challenges and increasing scrutiny of their inaction by human rights monitors.

They include the next round in the case of Shamima Begum, a London-born woman who absconded to IS-controlled Syria as a schoolgirl in 2015 and is among dozens of British nationals in Syria stripped of their citizenship. In July, the Court of Appeal ruled that Begum could not effectively contest that decision while detained in al-Hol and should be allowed to return to the UK to pursue an appeal. The government is set to challenge that judgement in the Supreme Court next month.

A current case at the European Court of Human Rights brought against the French government by the parents of a French woman with young children being held in the camps could have repercussions for similar complaints being brought against governments elsewhere in Europe.

In a joint submission to the court, two United Nations special rapporteurs said that the case offered judges an opportunity to “set international best practice for compliance with human rights standards”, and reiterated that the urgent repatriation of all foreign nationals was the “only international law-compliant response”.

A spokesperson for Belgian families, speaking on condition of anonymity, said: “It will absolutely serve as jurisprudence for all European countries and hopefully beyond. Europe is seen as a reference [on human rights] for many other countries in the rest of the world.”

The Belgian government is currently appealing against a Brussels court judgement issued last December ordering it to repatriate 10 children born in Syria to Belgian IS fighters, and fining it 5,000 euros ($5,900) per child for each day that it fails to provide them with assistance.

The spokesperson for the Belgian families said they would look to the ECHR if the Belgian government's appeal was upheld.

Meanwhile, the United States, which has consistently called on other countries to repatriate their nationals, appears to be losing patience with the reluctance of other Western members of the international coalition against IS. Earlier this month, the US said it had repatriated the last of 27 Americans known to have been in Kurdish custody in Syria. Ten of those have subsequently been charged or convicted of terrorism-related offences. The other 17 are either minors or were minors when they travelled into IS-controlled territory with their families.

Nathan Sales, State Department Coordinator for Counterterrorism, said the US was “leading by example” by repatriating American citizens: “We call on other nations, particularly in Western Europe, to take responsibility for their citizens.”

The head of the US military in the Middle East has also said he is ready to repatriate foreign nationals on other countries' behalf.

“The Department of State is aggressively engaging on this,” US Central Command chief General Kenneth F. McKenzie said in August, warning that a failure to address the issue of the detainees risked creating the conditions for an IS resurgence.

“I'm happy to provide the resources to move them when we are directed to do that, and I can move them anywhere in the world very quickly and in a safe and transparent manner.”

Kurdish authorities have delivered mixed messages on the issue of repatriation. Officials have long called for countries to take responsibility for their nationals, while also suggesting that adult detainees suspected of links to IS should be tried locally.

Earlier this month, Kurdish officials announced plans to remove Syrian detainees from the camps, which they said had become a “heavy burden” that the authorities could no longer afford to manage.

“Those who remain in the camp will not be the responsibility of the self-administration,” said Ilham Ahmed, president of the executive committee of the Syrian Democratic Council (SDC). Authorities subsequently freed hundreds of Syrian men imprisoned for suspected links to IS as well as releasing 289 women and children held at al-Hol into the care of tribal elders in Deir Ezzor.

In a further move, Kurdish officials last week suggested that thousands of suspected IS members could soon be put on trial locally in proceedings monitored by Swedish observers, following meetings with a visiting Swedish delegation.

However, Sweden's foreign ministry declined to confirm details of the report. Contacted by MEE, a spokesperson said: “We are following this closely but are keen to get more details about the initiative before we comment further.”

Legal experts say that the prospect of holding trials for foreign nationals locally is problematic because detainees have been held in a judicial black hole, with no due process rights, and because the Kurdish authorities are a non-state actor that is not internationally recognised.

Regional security issues, including the threat of further incursions into the Kurdish enclave by Turkish forces, a breakdown of a Russia-brokered pact between the Kurds and the Syrian government, or the prospect of an American military withdrawal from the region, could also undermine the viability of local trials.

Western government officials admit privately that there is little appetite for repatriation among elected leaders who fear that popular opposition to the return of people suspected of links to IS and portrayed as a potential security threat will cost them votes and support.

They cite the example of Norway, where a coalition government collapsed in January after the right-wing populist Progress Party withdrew its support over a decision to allow a woman and her two children to return from al-Hol so her five-year-old son could receive medical treatment.

In Canada, the government shelved plans to repatriate its citizens in 2018 following a public backlash after the broadcasting of a New York Times podcast series, Caliphate, in which a Canadian man living in Toronto purportedly confessed to his involvement in IS atrocities.

Last month, the subject of the podcast was arrested and charged with “hoax-terrorist activity”, accused by police of making up his story and raising “public safety concerns amongst Canadians”.

But campaigners believe that bigger issues are at stake, particularly in democratic societies that have traditionally promoted themselves as advocates for humanitarian values and human rights.

“We are all concerned. At the end of the day, it's not only about the families who have members over there,” the spokesperson for the Belgian families told MEE.

“The situation in the camps, the arbitrary detention, the wiping out of the rule of law, for me they feel and look like the first steps towards the wrecking of democracies.” 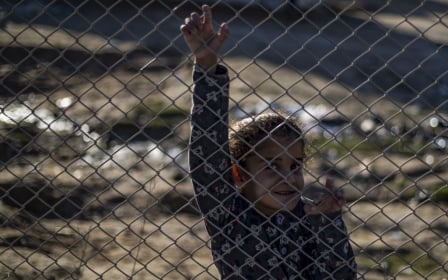