One in four asylum seekers comes from Syria, OECD reports, as global total doubles in 2015 to 1.65 million Activists leave lifejackets in Parliament Square, London, to coincide with the UN summit in New York (Mary Atkinson)
By
MEE and agencies

The refugee crisis unleashed by the Syrian conflict has pushed the number of asylum seekers globally to a post-war record high, lifting overall migration flows, the Organisation for Economic Cooperation and Development (OECD) said on Monday.

The OECD's 35 member states saw the number asylum seekers double in 2015 to 1.65 million, the body said in its annual International Migration Outlook report.

"We're at a historic moment. When we look at 2016, we see an increase in the number of asylum seekers, even if the flow is lower," said Jean-Christophe Dumont, the head of the OECD's International Migration Division.

Nearly one in every four asylum seekers came from Syria last year, followed by Afghanistan at 16 percent.

Three quarters of the total sought asylum in the European Union, with Germany getting the lion's share, the OECD said, citing figures from the United Nations refugee agency.

The migrant crisis has caused immigration to become a major political issue in many European countries and especially in Germany where Chancellor Angela Merkel's conservative CDU party has suffered electoral losses as voters rejected her open-door policy for refugees.

That marked a four percent increase from 2014, and brought the number of migrants to levels not seen since 2007, before the global financial crisis broke out.

The OECD published its Migration Outlook to coincide with a United Nation's summit on refugee and migrant flows on Monday in New York. 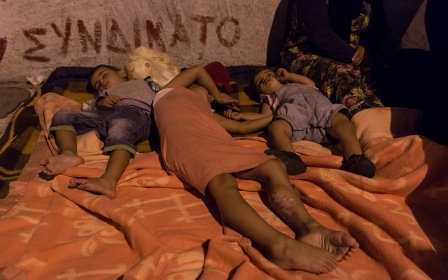 Refugees
Refugees: 'A quick death in Syria, a slow death in Europe'