Nusra changed its name to Jabhat Fateh al-Sham last year, and claimed to have broken links with al-Qaeda (Reuters)
By
MEE and agencies

Reports suggest mass assaults by members of Jabhat Fateh al-Sham (JFS) on FSA factions around Idlib and Aleppo province. Heavy artillery, suicide bombs and even attacks on internet access in Idlib were reported on Twitter, suggesting JFS was executing a planned strategy across a wide front.

The Syrian Observatory for Human Rights, a UK-based monitor, said the clashes began early in the day with an attack by JFS on a base belonging to the Jaish al-Mujahideen faction of the FSA. That attack prompted further clashes along the border between Idlib province and northern Aleppo province.

Officials from JFS, previously known as the Nusra Front and the Syrian arm of al-Qaeda, could not immediately be reached for comment. Ahrar al-Sham, an ally of the FSA which has already fought battles with JFS this week in Idlib, released a statement apparently warning its rival to cease fire or face further resistance.

The statement said the JFS assault was "without justification or legitimate reason", an aid to the rebels' enemies, and that Ahrar would join its "brothers" to contain JFS.

Tensions have been building between JFS and more moderate rebel groups since the opposition was defeated in Aleppo last month. JFS is not covered by a shaky truce between government forces and rebels who are meeting in the Kazakh capital Astana.

The aim of the meeting, organised by Russia, Turkey and Iran, is to shore up the ceasefire.

The JFS assault focused on rebel-held areas to the west of Aleppo, and adjoining areas of Idlib province, which is almost entirely in rebel hands.

An official in one of the rebel groups, Jabha Shamiya, told Reuters the attack began overnight, describing it as a large assault in several areas. The official said it was the first time JFS had attacked the FSA groups in that area.

"What they are doing serves Iran and the regime - so there is no FSA left in the north - particularly with the factions' delegation now in Astana where the regime offered nothing with regards to the ceasefire," said the Jabha Shamiya official.

The FSA groups now needed to coordinate their efforts to repel the attack, he said.

The commander of a second FSA rebel group, Jaish al-Mujahideen, told Reuters the "extremely fierce" JFS attack aimed to "eliminate the revolution and turn it black", a reference to the black flag flown by the militants in Syria.

He said the group had seized "some positions", though these were far from its headquarters.

JFS has a history of attacking and defeating FSA groups throughout the conflict that began in 2011, typically factions backed by President Bashar al-Assad's foreign enemies.

On Monday, JFS ejected militant group Jund al-Aqsa from its ranks, following clashes with other rebel groups over the weekend.

The move came after clashes broke out between the major Salafist opposition group Ahrar al-Sham and Jund al-Aqsa. Over the weekend, Ahrar al-Sham - with the backing of a number of allied rebel groups - began an operation to "annihilate" Jund al-Aqsa, which they have long accused of being a front group for the Islamic State.

Fighting continued over the weekend, with most of the violence centred around the mountainous region of Jabal al-Zawiya. There were numerous reports of casualties and prisoners being taken on both sides.

On Sunday, Ahrar al-Sham and Jund al-Aqsa signed a peace agreement, agreeing to release captured prisoners and set up council for mediation.

However, the incident left a bad taste in the mouth of many opposition supporters who see Jund al-Aqsa as a fifth column, and worry about being disunited even as ceasefire talks got underway in the Kazakh capital Astana.

Following the expulsion of Jund al-Aqsa, violence was reported to have restarted in Idlib.

One of the single biggest groups in the rebel ranks, JFS has been targeted in a spate of US air attacks in northwestern Syria since the new year. One of these killed dozens of its fighters at a training camp in Idlib last week.

The Pentagon said that attack was carried out by a B-52 bomber and killed more than 100 al-Qaeda fighters. 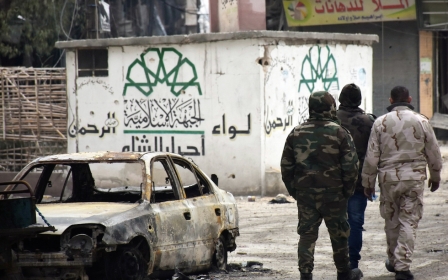