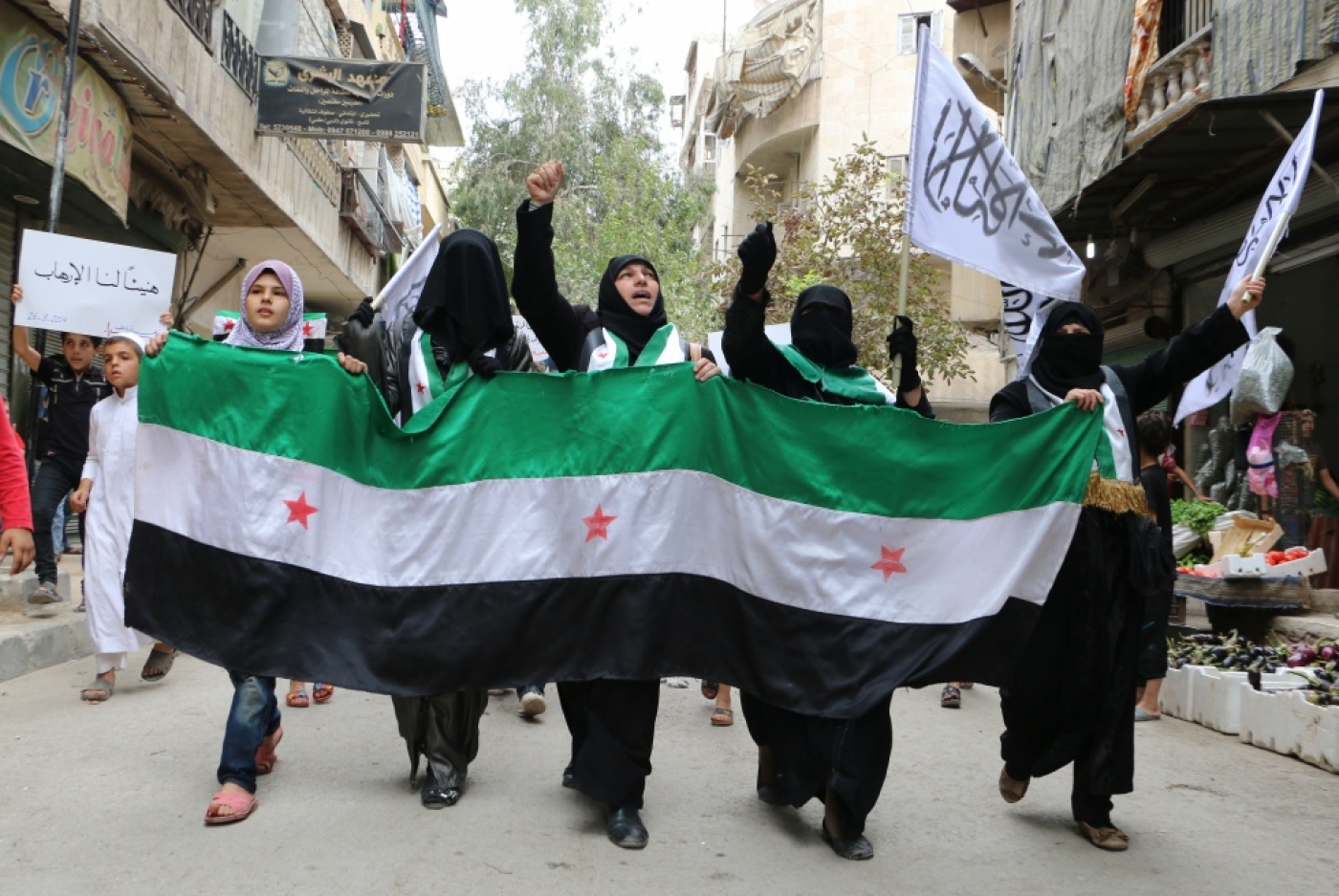 Female supporters of the al-Nusra Front take part in a protest against Syrian President Bashar al-Assad and the US-led coalition in Aleppo on 26 September, 2014 (AFP)
By
MEE and agencies

Syrian rebels from al-Nusra Front dealt a major blow to the government of president Bashar al-Assad on Monday by seizing two key army bases within hours, giving them control over most of Idlib province.

They advanced in coordination with Islamist rebel groups Ahrar al-Sham and Jund al-Aqsa, the Observatory said, adding that a string of villages in the area also fell.

"The regime forces had to retreat after al-Nusra front and Ahrar al-Sham movement's critical assaults on Wadi Al-Dayf," according to a press statement by the media office of the group.

"The army redeployed this morning in the Wadi al-Deif region and is engaged in fierce fighting at Hamidiyeh," it reported the source as saying.

The attack on Wadi al-Deif, which began on Sunday, killed at least 31 troops and 12 al-Nusra fighters, the Observatory said.

Speaking to AFP on condition of anonymity, a source from Lebanon's Shiite Hezbollah movement which had deployed fighters to bolster Assad's efforts in Idlib said "more than 3,000 (Sunni Islamist) gunmen" joined the twin offensive.

The pace of fighting has intensified between pro-Assad forces and the opposition's factions in a number of areas across Syria.

"The clashes between Assad’s regime forces and the Islamic Front have heated up in the Ardul Melah region located near Aleppo in northern Syria," said Sheikh Jassem, a field commander from the Islamic Front.

"Assad’s forces are being supported by Shiite militants from Iran, Iraq, and Hezbollah," Sheikh Jassem added.

Mainstream rebels had been battling to take Wadi al-Deif and Hamidiyeh for around two years, but despite repeated attempts had failed to do so.

Charles Lister of the Brookings Doha Centre said the gains highlighted the rise of the militants in the province.

"The nature of the operations has served to underline the renewed prominence of more Islamically minded forces in Idlib, with Jabhat (Front) al-Nusra and Ahrar al-Sham having played the dominant role in practically capturing the facilities," he said.

Its defeat of the SRF was seen as a blow to US efforts to create and train a moderate rebel force as a counterweight to the Islamic State (IS) group.

Within hours of taking Wadi al-Deif, Al-Nusra and the two other Islamist rebel groups also seized Hamidiyeh, the Observatory said.

After al-Nusra and its allies moved in, government warplanes launched 17 air raids against the base, the Britain-based group said.

Thomas Pierret, who teaches Islamic and Middle Eastern studies at the University of Edinburgh, said the advance is important militarily because the bases are on a road linking the central province of Hama to Aleppo in the north.

Lister said the advance may pave the way for "a major assault on Idlib city", which like most Syrian provincial capitals remains in government hands.

The gains give al-Nusra firm control of much of Idlib province, limiting the chances of a challenge from potential rivals.

Until September this year, Ahrar al-Sham had sought to distance itself from more hardline militants in Syria.

But a September 9 explosion that killed its top leadership "pushed the group to align itself more openly with al-Nusra", Abdel Rahman said.

"Now the two are fighting side by side."

On Monday, Ahrar al-Sham broke its silence on the September blast, blaming "a criminal group" with "international links". Abdel Rahman said this was an apparent reference to Western intelligence agencies.

Idlib was among the first provinces to fall, soon after the March 2011 outbreak of the armed revolt against Assad's rule.

Meanwhile, the EU backed UN efforts Monday to arrange a ceasefire in Syria's second city Aleppo as one of the few options left to help end the conflict.

EU foreign affairs head Federica Mogherini said the UN's planned "freeze" on the ground would ease the desperate plight of civilians caught up in the fighting and offer some way forward after repeated efforts to end the war had failed.

The bloc's 28 foreign ministers accordingly endorsed efforts by UN Syria special envoy Staffan de Mistura to bring about a "strategic de-escalation" in Aleppo and possibly other areas, she said after chairing a regular meeting in Brussels.

"It could be one possible way that a reduction of violence is possible in Syria and could even lead to a political process in the country" which was absolutely essential to a Syrian-led peace process, she said.

De Mistura's efforts necessarily include talks with the Damascus government and reporters asked Mogherini if support for his freeze plan implied an acceptance that Assad still had a role to play.

She replied that the EU did not and would not talk to Assad but conceded that "he is part of the reality."

The EU, supporting the UN, was working to bring about "a Syria without Assad and without Islamic State," she said.

Damascus wants the rebels to hand over their heavy weapons and allow the return of local administration officials to Aleppo.

The rebels in turn want a guarantee that the freeze will be total and not simply allow Damascus to redeploy its troops elsewhere.

10 die of starvation due to Assad forces siege

Ten Syrians, including eight children have died of starvation because of Assad forces' blockade in a village near the Syrian capital Damascus, it was announced Sunday.

The Syrian Revolution General Commission said the deaths occurred in December in Ghouta’s Arbin village, which is around five miles (eight kilometres) away from Damascus.

The alleged blockade imposed by Assad forces was preventing the flow of medical supplies and humanitarian aid in the area.

The situation was becoming worse day by day, especially with new diseases starting to emerge in the village, the commission said.

Around 216 people, including 150 children have died of starvation in the under siege Ghouta area within the last two years, it added.

The commission, which says aims to establish a democratic set up in Syria, called for urgent humanitarian aid for the affected people in the area.

Syria's war began as a pro-democracy movement demanding his ouster, but later morphed into a brutal war after pro-Assad unleashed a massive crackdown.

More than 200,000 people have been killed in nearly four years, and around half the population has been forced to flee. 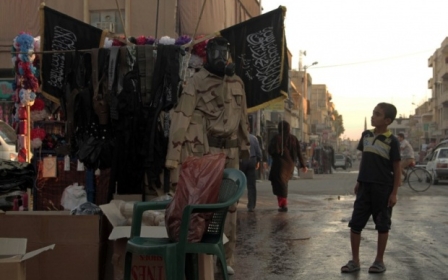 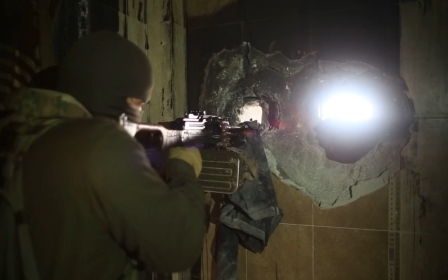