Israel's Netta won Eurovision 2018 with the song 'Toy' during the grand finals in Lisbon, Portugal (Reuters)
By
MEE and agencies

Tel Aviv will host the Eurovision song contest in 2019, the singing competition announced on Thursday, shelving speculation that Jerusalem would host the competition.

Jon Ola Sand, Eurovision’s executive supervisor, confirmed the decision on Thursday and said that Tel Aviv was given hosting rights as it had the “best setup”.

“We received three strong bids, but in the end, we decided that Tel Aviv has the overall best setup to host the biggest entertainment show in the world,” Sand said in a video announcement.

The Host City for the Eurovision Song Contest 2019 is...

➡️ Learn more about the host city on our website: https://t.co/Wz3aOCXrX9 pic.twitter.com/zTEtlgUx8G

The competition finals will take place on 18 May 2019 in Tel Aviv's International Convention Centre.

But the 25-year-old Barzilai courted controversy after she shouted "next time in Jerusalem", sparking fears that the event would be hosted in the contested capital.

While not in Europe, Israel participates in Eurovision as it is a member of the European Broadcasting Union and has won the competition four times.

In response to the announcement, 100 artists supporting the pro-Palestinian cultural boycott movement against Israel have called for a boycott of the contest in Israel.

“We, the undersigned artists from Europe and beyond, support the heartfelt appeal from Palestinian artists to boycott the Eurovision Song Contest 2019 hosted by Israel,” the statement read.

Israel has been hit by a recent spate of high-profile music artists pulling out of scheduled performances in Israel following pressure from the pro-Palestinian boycott campaign.

US President Donald Trump controversially recognised Jerusalem as Israel's capital in December and in May moved the US embassy to the city, which most countries say must form part of a final settlement with Palestinians. More than 60 Palestinians protesting the embassy move were killed by Israeli forces on 14 May. 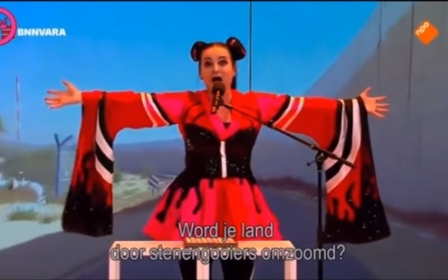