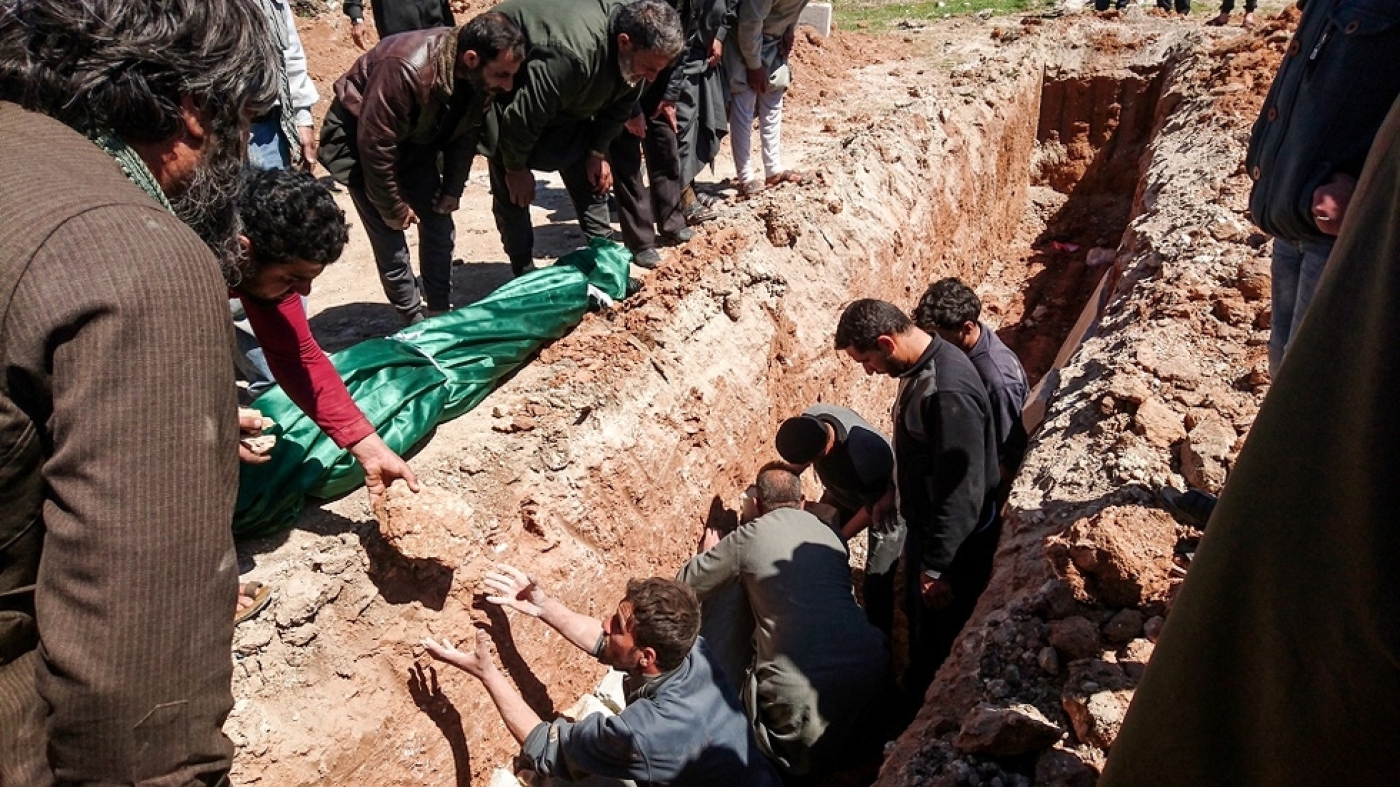 Men heave soil from a trench on wasteland in Khan Sheikhun, working their spades tirelessly into the rocky debris to dig deep enough for their purpose. A green shawl is carefully lowered into the hole, and families cry for their dead. Another victim of Tuesday's chemical attack is laid to rest.

A day after the horror, this small town in northern Idlib is trying to deal with the terrible effects of the early morning release of a nerve agent, possibly Sarin - an odourless, tasteless killer 4,000 times more potent than chlorine developed by the Nazis - which killed up to 100 people and poisoned hundreds more.

As the international community squabbles over who or what caused the attack, Khan Sheikhun digs and mourns, all the while aware that another atrocity could be on its way. Syrian air force jets on Wednesday buzzed over the town of 50,000 people, who have seen this all before, and expect it all again.

The roads were full of people fleeing for their lives

Samer al-Ahmed, an aid worker for the Syrian Medical Society, told Middle East Eye that the town had suffered multiple chlorine attacks in March and early April. That meant hospitals were already running short of supplies to deal with chemical attacks.

"The hospitals were absolutely not ready for an attack, so we went to stock up so they could be prepared," Ahmad said, recounting his journey to a supply warehouse outside the town in the hours before Tuesday's attack.

Then the bombs struck.

"I heard about the attack and began running to my car, panicking and counting the medication I had to help people," he said. "When I got to the town, I saw rebel checkpoints had been left open to allow victims and medics to get out of the attack zone. The roads were full of people fleeing for their lives."

Then he arrived at a hospital as it was being evacuated towards the Turkish border. One hospital had already been hit in an air attack that day, and medics were not risking more.

"I saw a mother and five children, dead, just lying there. All those still alive had left. There was just death left behind."

Ahmed said he then drove to other hospitals to deliver the vital supplies he had gathered.

Mohammad Ibrahim, a photographer, told MEE he woke early on Tuesday to the sound of ambulances. "I was close to the attack. I ran to the site to find out what had happened, and then I went to the hospital about 150m from my house. There were many martyrs there already."

That an attack happened is beyond dispute. Doctors Without Borders (MSF) said on Wednesday that eight people it treated near the border with Turkey had symptoms consistent with nerve agents like Sarin. The World Health Organisation said all signs indicated a nerve agent was used, adding further to evidence provided by doctors and activists on the day of the attack.

But the inevitable claims and counter claims of the various sides in the Syrian war threatened to boil over as Syria again denied involvement, and Russia and Iran both blamed "terrorists" for the atrocity. Britain, France, the US and other western nations have already blamed the government of Bashar al-Assad.

Ahmed, who has worked in Idlib for several years, batted aside Russian claims that rebels were responsible, Locals in Khan Sheikhun were heavily risk-averse and went to great lengths to ensure the Syrian government would have no reason to bomb them.

"Local opposition to large numbers of rebels in the city would make a chemical weapons factory being built in the city virtually impossible," he said.

"Locals forbid rebels coming into the city in large numbers, and to a hospital being built in the city, out of fear of being attacked by the regime."

International outrage has coalesced at the UN, where Britain, France and the US drafted a security council resolution calling for an international investigation, and cooperation from the Syrian government, to seek the truth behind the tragedy.

They demanded Syria provide flight plans and logs for Tuesday, the names of all helicopter squadron commanders and provide access to air bases where investigators believe attacks using chemicals may have been launched.

The resolution expressed a "determination that those responsible must be held accountable". The US president, Donald Trump, called the attack an "affront to humanity".

But the resolution faces, as ever, opposition from Assad's most powerful ally Russia, which has its own take on the events of Tuesday.

This afternoon in the hours before a UN Security Council meeting, Russia again pushed its assertion - widely discredited by experts in chemical weapons - that Tuesday's attack was the result of a Syrian air strike on a rebel chemical weapons factory.

Russia's foreign ministry spokeswoman Maria Zakharova said the resolution was "unacceptable" and based on "fake information".

"The US, France and Britain have once again planted - one cannot put it any other way - into the UN Security Council a draft resolution which has a completely anti-Syrian character," she said. "We do not believe it is expedient to pass a resolution on the chemical weapons attack in its present form."

Hasan Haj Ali, a commander in the Free Idlib Army rebel group, called the Russian statement a "lie" and said rebels did not have the capability to produce nerve gas.

"Everyone saw the plane while it was bombing with gas," he told Reuters from northwestern Syria. "Likewise, all the civilians in the area know that there are no military positions there, or places for the manufacture (of weapons)."

And the attacks continued on Wednesday. As diplomats and politicians bickered in New York, warplanes mounted five air attacks on Khan Sheikhun, the Syrian Observatory for Human Rights reported.

There was no gas, but their payloads would have the same effect on life. The war carries on, and the people of Khan Sheikhun await the next attack.