'They came to kill him': Palestinians mourn latest victim of Israeli occupation NABI SALEH, occupied West Bank - Dozens of men - young and old - from the Palestinian village of Nabi Saleh lined the entrance of the morgue at Ramallah hospital.

All were waiting to catch a glimpse of 21-year-old Ezza al-Din Abd al-Hafeezh Tamimi, who was shot and killed by Israeli forces on Wednesday morning during an Israeli military raid on Nabi Saleh, northeast of Ramallah in the West Bank.

They certainly came to kill him

Israeli activist Jonathan Pollack told Middle East Eye that video footage taken at the time of Tamimi's death shows that there was no stone throwing at the time.

Only three young boys were out in the field - a spot where Israeli forces regularly shoot tear gas, even live ammunition, at protesters, witnesses said.

“In the video you saw a soldier heading down the street, positioning himself behind a tree and shooting two live rounds. These are the shots that killed (Ezz al-Din) Abd al-Hafeezh,” Pollack explained.

Ezz al-Din was hit with live fire at the nape of his neck. The bullet made a clean exit.

The soldier was about 45 metres from the young man, villagers estimated.

“Any claim of self-defence by the soldier or any threat to his life is completely nullified both by the video and the distance,” Pollack said.

Ala Barghouthi, 21, was a close friend of Tamimi. “They certainly came to kill him,” Barghouthi told Middle East Eye.

“He was shot directly in the neck and then they left him on the ground for 10 minutes after he was shot. He would have died anyway,” Barghouthi said, referring to the length of time it took to take Ezz al-Din to hospital.

Nabi Saleh has become a symbol of Palestinian resistance since the start of weekly protests in 2010 against the illegal Israeli settlement of Halamish nearby.

The settlement was built on Palestinian land and its settlers also took over Nabi Saleh’s water spring.

With weekly protests, Nabi Saleh has maintained an active media presence, documenting the actions of soldiers in their village.

Residents of Nabi Saleh have grown accustomed to killings, arrests and harassment by Israeli forces.

Last February, 11 people from the village were detained. Pollack said soldiers came looking for Ezz al-Din; when they couldn’t find him, they arrested his father and older brother and took them to be interrogated by the Shin Bet – Israel’s intelligence service.

“They weren’t questioned at all; they were just threatened. They were told they either give in Abd al-Hafeezh or the Shin Bet will continue to raid their house and arrest his mother,” Pollack explained.

“They even explicitly threatened to kill Abd al-Hafeezh, [before] releasing them.”

Back at the morgue in Ramallah hospital, Tamimi's body lay on a slab draped with the Palestinian flag. Young boys began handing out posters with the dead man's photo before his body was carried to a awaiting ambulance, which led a march through the streets of Ramallah.

“Those who shout, never die,” the men chanted. “Rest now, martyr, we will continue the struggle.”

But the march couldn't make it to the village. The Israeli army informed the Palestinian district coordination office that they wouldn’t allow the funeral procession to go through the main street of Nabi Saleh.

Prominent Nabi Saleh activist Manal Tamimi wrote on her Facebook page: “As if it’s not enough that they killed Ezz [al-Din], [they also want] to break us. But they still don’t understand that nobody can give orders to the Tamimis.”

Filled with mourners, cars attempting to get to Nabi Saleh from Ramallah for the funeral were stopped by Israeli soldiers, who blocked the road.

They only allowed the ambulance with Tamimi's body to proceed, and pushed and threatened those who tried to cross, before firing sound bombs at them.

Only after an hour had elapsed did the soldiers start to let cars trickle through, before driving off to station themselves at the foot of the village. 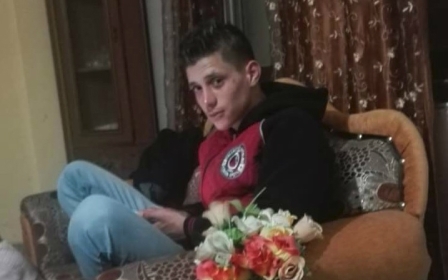