Thirty years after first intifada, Palestinians look to past for fresh lessons

And in light of latest US move, many Palestinians call for renewed struggle to resist Israeli occupation 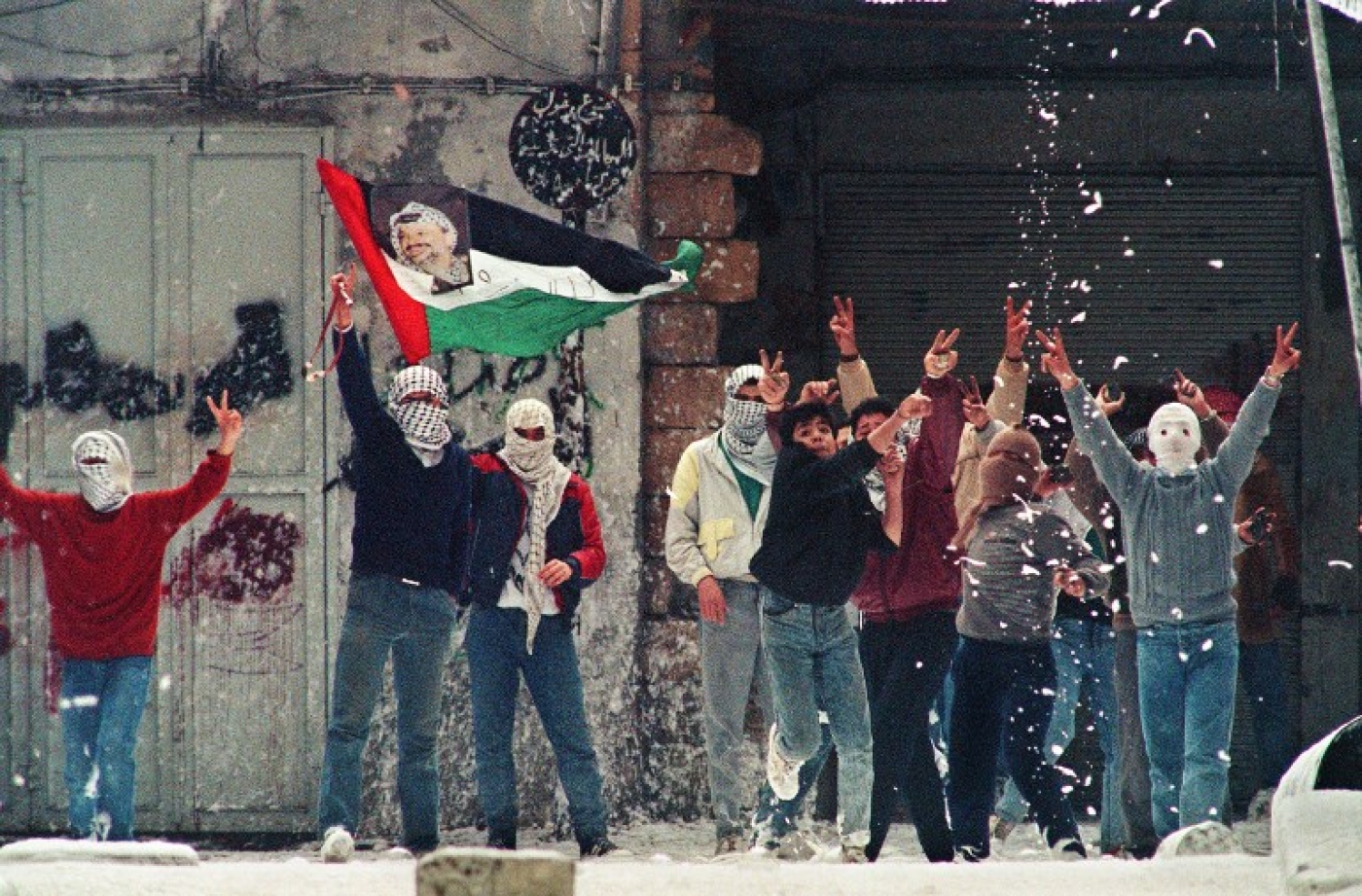 BETHLEHEM - As the world has reacted with disbelief at the US recognition of Jerusalem as the capital of Israel, Palestinians have been commemorating the 30th anniversary of the start of the first intifada.

But three decades later, many Palestinians feel that the situation has never been as dire as it is now. With some 70 percent of Palestinians under the age of 30, that period might literally feel like a lifetime ago - yet the uprising still looms large in Palestinian consciousness, as some hope it could yet inspire a new popular movement against the Israeli occupation.

'Fire hidden under the ashes'

On 8 December 1987, an Israeli army truck ran into Palestinians in the Gaza Strip refugee camp of Jabalia, killing four.

The incident, which Palestinians saw as a deliberate attack, is widely recognised as the spark that began the intifada, or “uprising”.

“The intifada was a big surprise for everyone,” Abu Ahmad, a resident of the occupied West Bank refugee camp of Dheisheh, who participated in the first intifada, told Middle East Eye.

“The economic situation in the West Bank at the time was relatively good, and perhaps even better than many surrounding states. The occupation’s pressure on the people was less than it is now, and targeted more directly against Palestinian revolutionary organisations.”

“But suddenly, Israel, the entire world, and - most importantly - Palestinians discovered that there was a fire hidden under the ashes that no one had noticed until then,” he added.

Abu Ahmad, who was 22 when the intifada began, rejected the commonly held belief that the Palestine Liberation Organisation (PLO) orchestrated the movement from its inception.

“The PLO heard of the intifada at the same time as the people in Zimbabwe,” he said.

“It was surprised like everyone else, and, in fact, it played a negative role when it tried to take control of the intifada.”

For Israeli professor Ido Zelkovitz, who heads the Middle East studies department at the Max Stern Yezreel Valley College in Israel, “all the signs” were pointing to an imminent wave of unrest - growing protests at Palestinian universities, a financial crisis in the early 1980s - yet the Israeli government was unprepared for a scenario in which Palestinian civilians would spontaneously rise up.

“The fact that the Israeli government was not ready for this popular resistance gave Palestinians an early advantage and helped Palestinians create this alternative local leadership while challenging the old guard of the PLO and Fatah,” Zelkovitz said.

The “old guard”, he said, “were more focused on diplomatic and military armed resistance without taking into consideration the needs of Palestinians in the West Bank and the Gaza Strip”.

The most striking feature of the first intifada was its sweeping popular appeal and the sense of unity that was felt across Palestinian society.

“It was an amazing period from my point of view,” remembers Khawla al-Azraq, a member of the Fatah Revolutionary Council.

“It was a real struggle because it was popular, everyone was involved, there was a meaning to what we did,” she told MEE.

“Even though I was pregnant at the time, I didn’t care - I would go to demonstrations, I would throw stones, I participated in solidarity activities to support the families of prisoners and martyrs. All of my time was dedicated to the daily struggle.”

Even though I was pregnant at the time, I didn’t care - I would go to demonstrations, I would throw stones, I participated in solidarity activities

Azraq recalled how Palestinians took things into their own hands - not only through demonstrations, boycotts, and strikes, but also by running underground schools and clinics in defiance of an Israeli crackdown on Palestinian education.

While the first intifada was largely peaceful, the official Israeli reaction to it was anything but. Then-Israeli defence minister Yitzhak Rabin - who received a Nobel Peace Prize in 1994 - infamously encouraged Israeli forces to “break the bones” of Palestinian demonstrators.

“Until now, I can’t forget seeing Israeli soldiers on TV using stones to break the bones of youths, it was terrible,” Azraq said, pointing out that similar policies were still being implemented by the Israeli army today.

Abu Mahmoud, another resident of Dheisheh, was imprisoned alongside Abu Ahmad during the first intifada.

Both described the torture and violence used by Israeli forces against Palestinian detainees at the time - doctors and guards beating naked prisoners with batons and rifles, transfers between prisons during which the inside of the prisoner transport vehicle would be “completely red with blood”.

But the extreme levels of violence used against Palestinians backfired against Israel, the two men said.

“We sent the occupation back to its natural form, that is, without any make-up. It returned to being a pure military occupation against occupied people,” Abu Ahmad said.

“Palestinians who thought they were impartial and that Israelis would not assault them, once their children were beaten up or detained, or their homes were destroyed, we would find them with us at the protest the next day… The occupation was the biggest inciter against itself.”

In the aftermath, hope remains

After six long years, the intifada ultimately led to the 1993 Oslo Accords and the subsequent creation of the Palestinian Authority (PA), an institution intended to serve as a transitional government before the creation of an autonomous Palestinian state. The deal was seen by many at the time as a culminating achievement after years of struggle.

“Oslo helped the Palestinian leadership talk to the international community, negotiate, do a lot of advocacy, and make people around the world support our rights,” Azraq said. “Meanwhile the situation on the ground for Palestinians became worse.”

Almost 25 years later, the increasingly unpopular PA remains in place, and Israeli policies - increased settlement expansion, the blockade on Gaza, the illegal separation wall in the West Bank - have left many disillusioned.

Israel did everything, but it was not able to break the will of the Palestinian people (during the intifada). Oslo broke it

“In 1987, there were Palestinians and the occupation,” Abu Mahmoud said.

The first intifada nonetheless still looms large in the Palestinian collective consciousness, as younger Palestinians continue to see that period of history as an inspiration for any possible future popular movement against the occupation.

“For the (younger) generation, the first intifada is a beautiful poem,” Abu Ahmad added.

“They cannot evaluate it like I do, its positives and negatives, where we succeeded and where we failed. They see it as a very beautiful image.”

Abu Ahmad said he was hopeful that Palestinian youth could succeed where the generation of the first intifada failed.

“We had a beautiful dream at the time, but we could not compare it to the outside world, because we were not able to travel, we did not have the internet,” he said.

“This generation has seen the world, travelled, learned, they have technology in their hands and they use it well. They have the real will to resist. Real will is what triumphs.”

The current context has only further brought to the foreground the notion of a popular uprising, as Hamas leader Ismail Haniyeh called for a new intifada on Thursday in response to Trump’s decision regarding Jerusalem - an idea resonating across the Palestinian political spectrum.

We need a new intifada... It has to look like the first intifada in that it has to be a popular intifada

“We need a new Intifada,” Munther Amira, the head of the Popular Struggle Coordination Committee (PSCC), told MEE at a protest in the city of Bethlehem on Thursday against the American move.

“It has to look like the first intifada in that it has to be a popular intifada, and I would advise my people that it be non-violent,” Amira added. “They (Israel) own the power but we own our bodies.

“We can raise our voices, we can change history through non-violence, and we will continue struggling against this occupation, as close to what we did during the first intifada as we can.”

Azraq was cautious about the likelihood of a similar movement occurring today, pointing to the obstacles currently standing in the way of a large-scale Palestinian movement.

“Any intifada, any revolution needs good, strong leadership with a clear programme supported by the people,” she said. “But now the Palestinian people don’t trust their leadership.”

However, she remained positive.

“In Palestine or anywhere, the more people are under pressure, the more they rise up, the more they resist,” she said. “I think the revolution is still inside the people and I believe it will continue. I don’t know if we will succeed within my lifetime or my son’s lifetime, but we need to keep the hope.”