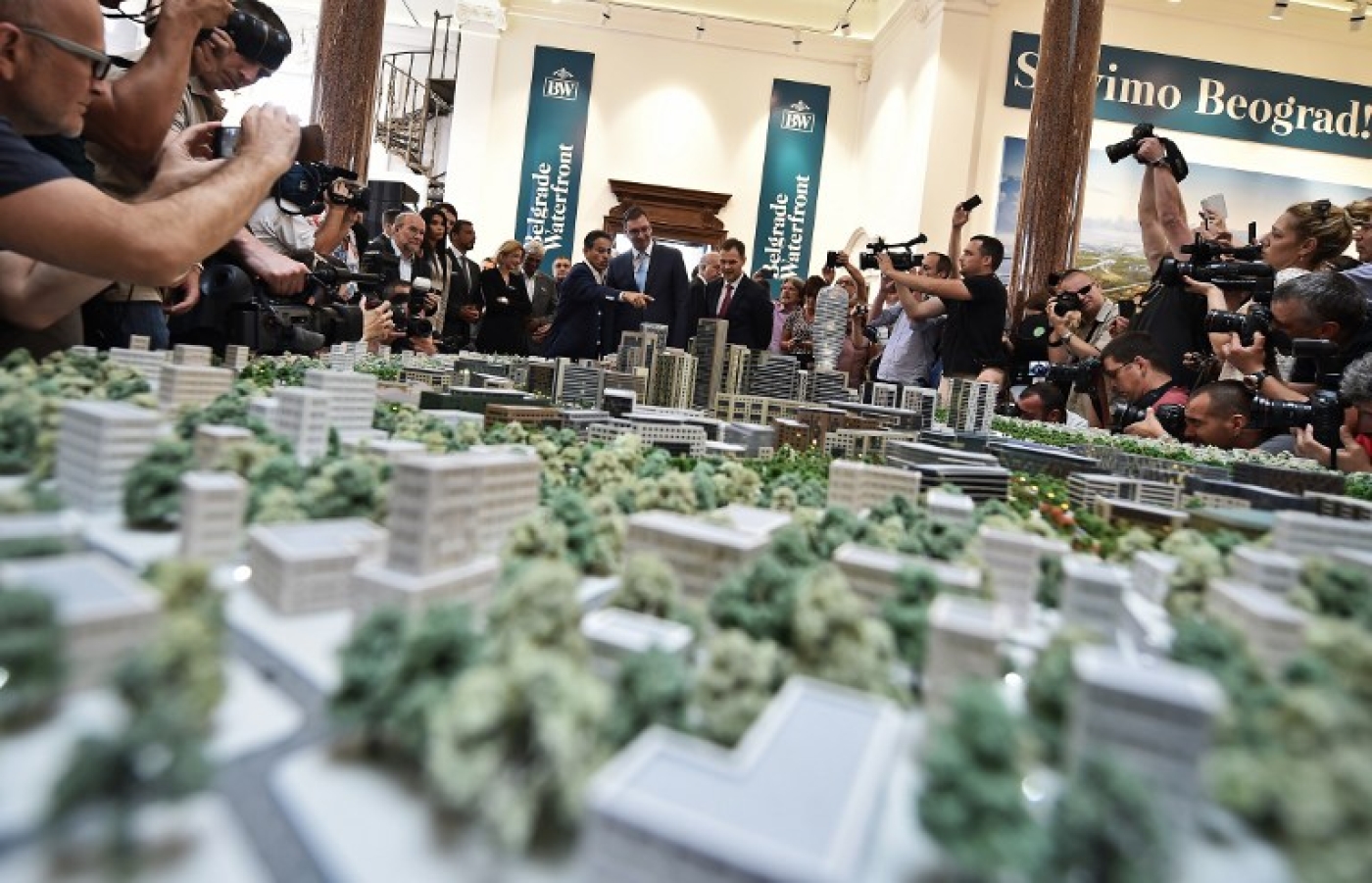 BELGRADE – Large-scale protests against a controversial $3bn United Arab Emirates-backed development project in Belgrade broke out again in Serbia on Wednesday, putting further scrutiny on what opponents say is a corrupt relationship between Belgrade and Abu Dhabi.

About 9,000 people braved bad weather to protest in front of city hall over the Belgrade Waterfront project, chanting, "Thieves! We will not let you do this!"

Demonstrators then marched to various state-controlled media outlets to protest against a lack of critical coverage of the project that has raised major questions over the country's dealings with the UAE.

The protests against the project – designed to be a luxury complex of shops, hotels, offices and flats in the heart of Belgrade - follow others earlier this month that have seen thousands of people take to the streets of central Belgrade. Several opposition parties have also lent their support to the cause and called for demonstrations to continue.

The earlier protests were sparked by illegal demolitions last month that were pushed through to make way for new buildings.

On 24 April, dozens of masked men blocked access to the area in the heart of the capital where the project will be built, stopped residents from entering, tied up several people and confiscated any phones they could find.

The men then bulldozed several buildings as hapless onlookers tried to call the police for help, only to find that no help came, according to witnesses, security camera recordings and a report from Serbian ombudsman Sasa Jankovic.

The incident prompted residents to once again say they had had enough, but public fury over the project runs much deeper.

Recent revelations in the Panama Papers linking Serbian policy-makers with UAE businessmen have fanned popular resentment at the UAE’s role in Serbia, which benefits the two countries' political elites, but shortchanges Serbian taxpayers.

The waterfront project was announced in Cannes in March 2014, after a much-publicised meeting between Serbian Prime Minister Aleksandar Vucic and UAE Crown Prince Mohammed bin Zayed al-Nahyan. During the meeting, Vucic said, the crown prince issued personal guarantees that UAE companies would invest in Belgrade Waterfront and other projects.

Belgrade Waterfront was designed to be a joint venture between Eagle Hills, a UAE company, on the one hand and the Serbian government and Belgrade municipality on the other. It was announced that Eagle Hills would invest $3bn in the project.

However, under terms later agreed by Serbian authorities, Eagle Hills will provide $300m for the project but only $20m will be direct investment. The remainder, according to Serbian media reports, is supposed to come from the sale of luxury apartments in the new complex, which has raised serious questions about where the cash to build the project will actually come from.

The public line from Serbian authorities has been that they will not pay a single penny and the project will bring in $3.5bn in investment, but many argue that this leaves a huge funding shortfall for a project experts insist will cost billions more, causing concerns that the heavily indebted Serbian state will be left to pick up the tab.

Mirko Rudic, a journalist with Serbian weekly Vreme who has been covering Belgrade Waterfront, told MEE that the project could be on the verge of “breaking point”.

“Belgrade Waterfront is a political project, and as it seems now, is slowly getting out of the hands of government, so this could become the breaking point for it,” Rudic said.

“People who started this project could suffer political consequences, but people from Belgrade, unfortunately, will be left with couple of unfinished construction yards and one shopping mall.”

Once the apparent inconsistencies began to mount, residents, opposition parties and legal and architectural experts began to criticise the project and slam authorities for skirting a plethora of laws and regulations to push it through.

Thousand took to the streets in regular protests every few months in recent years, but they began to fade out until anger was rekindled by the recent demolitions.

In April 2015, the government passed legislation, known as Lex Specialis. The bill made it possible for the state to confiscate land from private landlords, a move lawyers slammed as unconstitutional and in contravention to the UN Declaration of Human Rights. Initiatives to repeal the law have since been launched but with little effect.

“The point is that the assets can be seized when required by the public interest, but that does not exist in the Belgrade Waterfront project,” Srecko Pecikoza, one of the lawyers trying to get the law annulled, told Middle East Eye. “There may be economic interest for it, but certainly not public interest.”

Bojan Kovacevic, president of Serbia’s Academy of Architecture, told MEE that no Serbian architects were consulted about the project and that plans to develop the area into a public space architects had suggested were ignored. Further, he argued that the project is unsustainable, but the government ignored more than 2,000 appeals from experts calling for the project to be revised.

According to his estimates, cash-strapped Belgrade authorities would have to fork out 3bn euros ($3.3bn) just to make the site viable, something that the current funding structure does not take into account.

"The problem is that our side has signed a contract in which one can clearly see the interests of foreign investors, but there is simply no interest for our side,” Kovacevic said. “Our interests, as can be seen from the contract, are indirect, in the sense some local labour will be employed and that's all."

Officially, the relationship between Serbia and UAE investors is presented as smart business, but some say the deal is a way for politicians to appropriate public money, since the public will finance the project and the profit will be made by members of the government and the investors.

Eagle Hills, the UAE company working on the project, did not reply to MEE’s request for comment.

Previous collaborations between Serbia and the UAE have only helped to rouse suspicion.

The contracts were never made public, but government promises that the stake would be sold for $500m were not honoured, with nearly half of the flagging airline reportedly going for just $100m.

By 2014, the new partnership was already in trouble. Nikola Tesla Airport, a publicly traded company that runs the main airport in Belgrade and in which the government has an 83.15 percent stake, was forced to write off $17.6m worth of Etihad debt, according to a report from KRIK, a Serbian investigative reporting consortium.

A fresh $22m in debt was written off again earlier this year. Officials said they were left no option but to pay up because the government contract with Etihad pledged to help the Air Serbia-Etihad joint venture to operate at a profit.

One of the murkiest parts of the relationship involves Matar Suhail Ali Dhaheri, the crown prince’s right-hand man for investments in Serbia, and Mohammed Dahlan, a former leader of the Palestinian political party Fatah who has been exiled from Gaza and the West Bank and has close ties to the UAE monarchy.

Dahlan and his family were all quietly given Serbian citizenship in 2013 and 2014, while Dhaheri was personally given citizenship by Vucic at the start of the year.

Opponents allege that the men may have been granted nationality in order to allow UAE investors to buy up chunks of currently protected fertile Serbian agricultural land on the cheap.

While tensions over Belgrade Waterfront and UAE-Serbia ties appeared to calm down in recent months, popular anger over this month’s bulldozing and the harsh methods employed has brought the issue back to centre stage.

Dobrica Veselinovic, a leading activist in the Do Not Drown Belgrade movement that pickets against the project, told MEE that his group was determined to turn up the heat.

“Complaints submitted to the authorities have been ignored, so we are raising awareness among citizens through public actions, demonstrations and the like," said Veselinovic who was briefly detained in 2015 for his political activities.