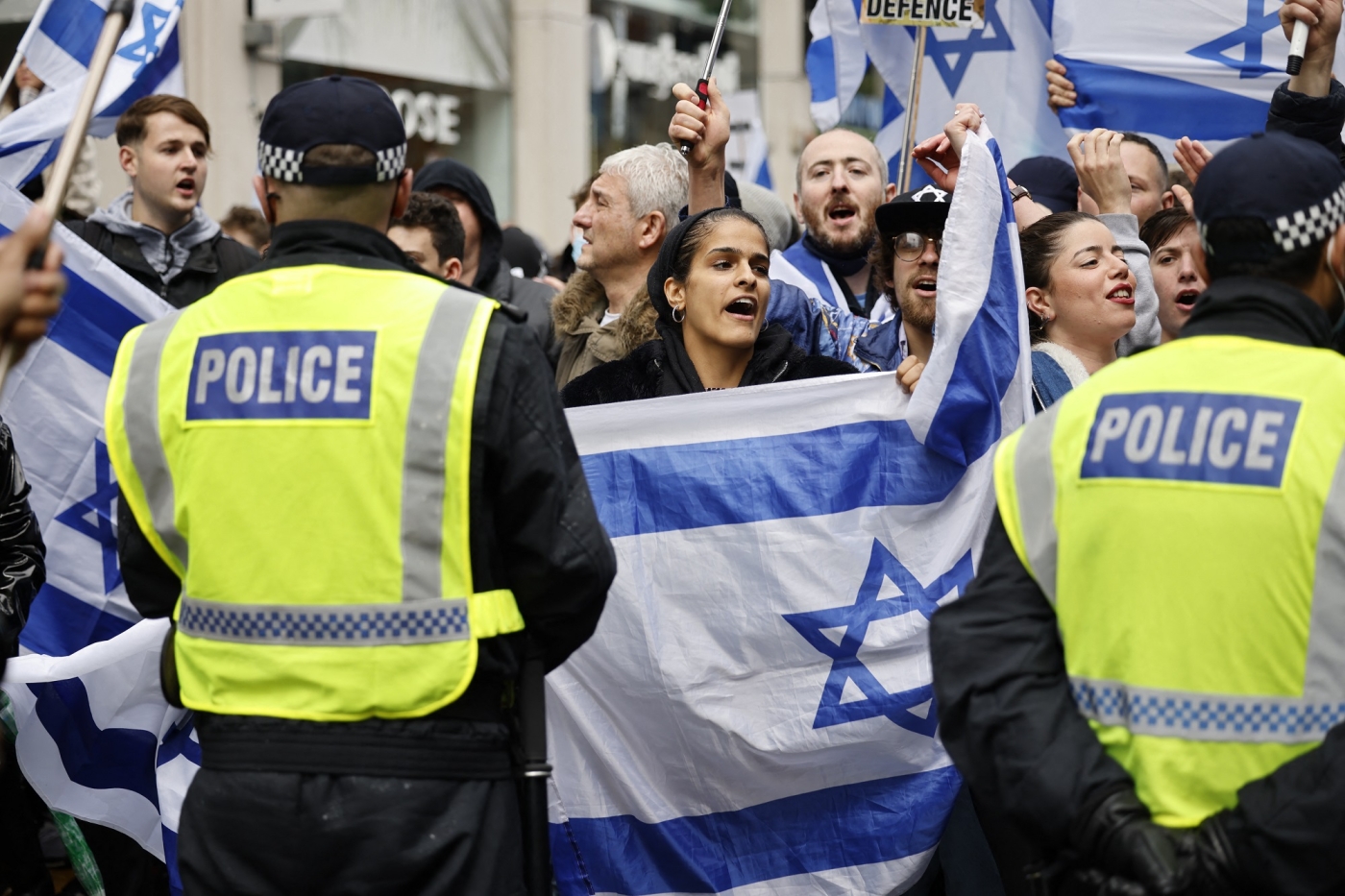 Demonstrators rally in support of Israel outside the Israeli Embassy in central London, 23 May (AFP)
By
MEE staff

British far-right leader Tommy Robinson was spotted being greeted with a hug as he attended a rally in support of Israel in London on Sunday.

Surrounded by a small group of supporters and a film crew, Robinson was seen among the estimated 1,500 people who stepped out onto a wet High Street Kensington, adjacent to the Israeli embassy, chanting Hebrew songs, waving the Israeli flag, and holding placards insisting on what they called Israel’s right to defend itself.

Tommy Robinson today at The Solidarity With Israel Protest in Central London 23.5.21 pic.twitter.com/57imh0wxLV

In one picture, Robinson is seen wrapped in the blue and white of the Israeli flag while holding a sign that read, “Free Gaza from Hamas.”

The placard is marked with the logo of the Zionist Federation, leader of Britain’s Zionist movement, which organised Sunday’s rally.

In a video, Robinson, Britain's most notorious anti-Islam activist, was greeted with a hug by a member of the crowd.

This man was cheered on by so many of the crowd.

And even Tommy Robinson - watch how he is hugged by one of the crowd..

Yet this was what we saw. pic.twitter.com/pROHJypRMH

The pro-Israel protest comes less than a week after a ceasefire in Gaza following 11 days of Israeli bombardment that killed at least, which killed at least 248 Palestinians amid growing global solidarity in support of Palestinian human rights.

Robinson has been one of Britain’s most visible and outspoken far-right leader over the last decade and has led both the English Defence League and Pegida UK, which have both consistently campaigned against Muslims and Islam.

Zionist groups were quick to distance themselves from Robinson, whose real name is Stephen Yaxley-Lennon.

The Board of Deputies tweeted that Robinson was “not welcome” and that his message of “hate and division must be confronted.”

Speakers at the rally included Israel ambassador Tzipi Hotovely, who has previously denied Nakba, the mass displacement of Palestinians leading to the establishment of Israel. 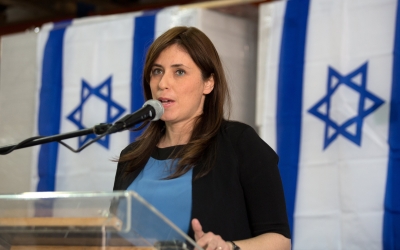 Hotovely appeared at a Board of Deputies (BoD) online event in December where she described the expulsion of 700,000 Palestinians in the 1948 Arab-Israeli war - known as the Nakba or "catastrophe" in Arabic - as a "very popular Arab lie".

Other speakers included the Zionist Federation’s chairman Paul Charney and the Board of Deputies president Marie van der Zyl.

A small group of men reportedly tried to enter the protest area chanting "free Palestine" and waving the Palestinian flag, but were moved away by police.

In what appears to be a response to the counter-protest, a pro-Israel supporter was seen shouting “there will never be Palestine”, to loud cheers of approval.

“They’re waving flags that have no nation,” the man said into a loudspeaker, hoisted onto someone’s shoulders.“There is no Palestine. There will never be Palestine. It’s our country, My F***ing country!”

The pro-Israel rally had 1% (?) of the attendance of yesterday, yet had:

1. Tommy Robinson attending (plus fans)
2. Tzipi Hovotely on stage speaking
3. One participant screaming: "there will never be Palestine. It's our country. My f***ing country"

Let's see how it's covered pic.twitter.com/kNiMBQOnJT

The Board of Deputies was among Jewish groups to attend a virtual meeting at Downing Street with Prime Minister Boris Johnson, who provided assurances and described the incidents as “intolerable.”

At the meeting, the president of the Board of Deputies, van der Zyl, reportedly pressed Johnson to proscribe all branches of Hamas, not just its military wing, as a terrorist organisation.

Despite a long history of antisemitism, Britain's far-right has increasingly come to see Zionism as a potential ally of convenience in their crusades against Islam.

In 2017, a Jewish community group in Manchester condemned “openly racist” Tommy Robinson and the “tiny number” of Jews who support him after election leaflets urging Jews to vote for Robinson were disseminated among Manchester’s Orthodox Jewish community.

The anonymous flyers were addressed to "our fellow Orthodox Jews", and called Robinson "a staunch friend of our people.”

An estimated 180,000 people took part in a march in support of Palestine on Saturday, making it the biggest pro-Palestine rally in British history. 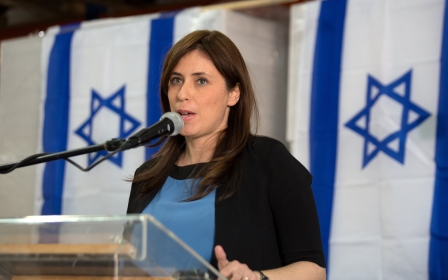 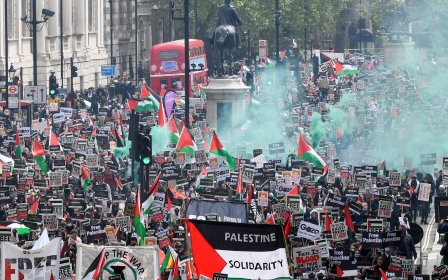 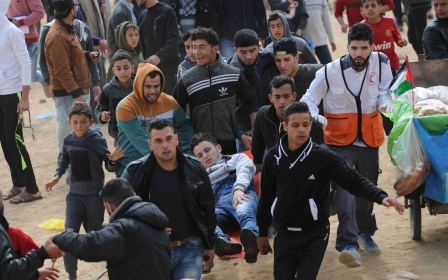