While the Tobruk-based House of Representatives says militias in Tripoli are blocking ministries in the capital, workers reportedly return for the first time in months - but who will pay them? Libya's outgoing Tobruk-based government admitted Monday that it has lost control of Tripoli to armed militias.

"Ministry and state offices in Tripoli have been occupied by armed militias who are preventing government workers from entering and are threatening their superiors," the government said in a statement.

It said the interim government was in contact with officials and "trying to ensure the continuity of services from afar".

Other sources, however, said that Monday was the first day ministry workers in the capital had been able to return to their jobs after two months without running water, gas or public transportation.

"Life is slowly getting back to normal," said Mattia Toaldo, Policy Fellow at the European Council on Foreign Relations. "One of the main efforts of the militias that have taken Tripoli . . . has been showing that they were bringing back some degree of normalcy."

Libya has been sliding into chaos since Muammar Gaddafi was overthrown and killed three years ago, with interim authorities confronting powerful militias which fought to oust the veteran dictator.

The Tobruk government announced last week it had tendered its resignation to parliament, days after a rival Islamist administration was created. The parliament, which was elected in June, and the government are operating out of eastern Libya for security reasons.

The move came after militias allied to the GNC took control of key locations in the capital, including Tripoli International Airport. The militiamen also, over the past week, apparently moved into the US embassy compound in Tripoli, which had been evacuated in July.

The re-emergence of the GNC meant that the country essentially has two parliaments claiming legitimacy, this time operating 1,600 km from one another.

While the House of Representatives won June elections which saw Islamist groups win only 30 seats out of 200, the GNC holds that it is still the country's legitimate government because there was never a proper transition from the old parliament to the new parliament.

Libya Dawn, allied to the GNC, rejects the legitimacy of the elected parliament because it allegedly supported air raids last month -- which US officials said were carried out by the United Arab Emirates -- against its fighters in the airport area before they defeated nationalist militia rivals.

Parliament has in turn branded Libya Dawn - also referred to in Arabic as Fajr Libya - as "terrorists", putting them in the same boat as the Ansar al-Sharia jihadists who control most of second city Benghazi.

On Monday, the parliament in Tobruk voted to task Thani with forming a streamlined new government, the official news agency Lana reported.

He was named to form an 18-member team, down from the outgoing lineup's number of around 30, it said, adding that seven of the new ministers would put together a crisis cabinet.

International powers, many of whose foreign ministries have fled Tripoli in the face of growing security problems, largely treat the House of Representatives as Libya's legitimate government, seeing the body as having electoral legitimacy, Toaldo said.

However, if the Libya Dawn coalition continues to consolidate power in Tripoli and key institutions, like the Central Bank and the National Oil Corporation, lean towards the GNC as a result, an increasingly awkward situation could continue.

"I think that many ambassadors are privately thanking God that they are no longer in Tripoli because sooner or later, they will get an invitation in Tripoli [from the GNC] which they cannot accept because they don't recognise it," Toaldo said.

Going forward, one major question will be which government, if any, gains control of the country's purse, he added. Currently, the Central Bank is not paying foreign contracts and is making a minimal payments to state employees, and it is unclear who is in charge of these payments.

"I would say that no one is in control as of now because the purse of the Central Bank has only paid salaries," Toaldo said.

By law, the House of Representatives (HoR) should be meeting in Benghazi, a decision that was taken to bring eastern Libya - also called Cyreneica - back into the political fold and show that power was no longer centred in Tripoli, Toaldo said.

With repeated attacks on Libya's parliament by militias this year, where the parliament is located and, more importantly, which militias control that location is critical.

Benghazi is currently under control mostly by Islamist militias whereas Tobruk, where the HoR now meets, is controlled by forces loyal to renegade general Khalifa Haftar.

Haftar launched what he called 'Operation Dignity' in May which he said was a mission to "purge" Benghazi of "rogue militias." Four months later, fighting between Haftar's troops and militias continue in the city.

On Monday, at least 13 people killed and 45 wounded during clashes between the Islamist militias and Haftar's forces.

Over the weekend, Islamist militias, including members of Ansar al-Sharia, attempted to take the Benina area where Haftar's forces control the city's civilian and military airport.

Heavy fighting ensued and at least 10 of Haftar's fighters were killed and 25 others wounded.

This month, the militias have seized several army camps in Benghazi. 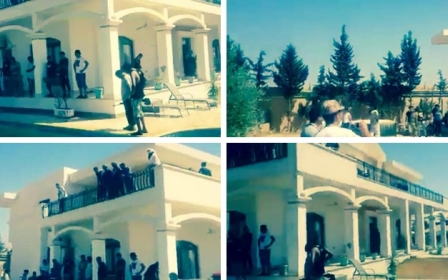