Donald Trump has announced that the US will withdraw from the landmark Iran nuclear deal, in the most significant foreign policy move of his presidency so far.

In a blow to US allies who support the deal, Trump said: "I am announcing today that the United States will withdraw from the Iran nuclear deal, and in a few moments I will sign a presidential memorandum to begin reinstating US nuclear sanctions on the Iranian regime."

Speaking at the White House on Tuesday, he called the Iran deal "defective" and said that the US will be "instituting the highest levels of economic sanctions" against Iran.

Pulling out of the deal was a key Trump campaign promise and he has repeatedly threatened to withdraw from the accord, which was signed during Barack Obama’s presidency after five years of diplomatic efforts.

Trump used his White House speech to attack the Obama-era deal, saying it was failing to protect the US and its allies from the “lunacy of an Iranian nuclear bomb”.

He said that the “decaying and rotten structure of the current agreement” would allow Iran to develop a nuclear weapon in a short period of time, and that failure to act would prompt a “nuclear arms race in the Middle East”.

He did not mention that Israel is widely believed to be the only nuclear-armed state in the Middle East, with more than 100 warheads according to US researchers, although it neither confirms nor denies possessing atomic weapons.

The president said he made the decision after consulting with US allies, despite frantic diplomatic efforts from European allies to stick to the deal.

He added that America would "not be held hostage to nuclear blackmail" and will not allow "a regime that chants 'Death to America'" access to nuclear weapons.

He also said that "the United States no longer makes empty threats. When I make promises, I keep them."

Following Trump's speech, the US Treasury said that it would reimpose a wide array of Iran-related sanctions after the expiry of 90- and 180-day wind-down periods, including sanctions aimed at the country's oil sector and transactions with its central bank.

In a statement on its website, the Treasury said sanctions relating to aircraft exports to Iran, the country's metals trade and any efforts by Tehran to acquire US dollars will also be reimposed.

Trump’s speech, in which he attacked Iran for its intervention in Yemen and Syria, came minutes after the Israeli military told its civilians in the Golan Heights to prepare their bomb shelters after troops allegedly noticed “irregularly activity of Iranian forces in Syria”.

The US leader started his speech by accusing “Iran and its proxies” of bombing American embassies, murdering hundreds of American service members and torturing American civilians, in comments that struck a similar tone to remarks by President George W Bush in the run-up to the Iraq war in 2003.

He also accused the Iranian government of “plundering the wealth” of its people, and supporting terrorist groups including al-Qaeda.

The move to violate the deal and reinstate all sanctions on Tehran has come under fierce opposition from the international community.

Trump ignored warnings from Germany, France and the UK - all parties to the deal alongside Russia and China - that a US withdrawal will undo years of work that has kept nuclear weapons out of Iran’s hands.

It has already been met with dismay in Tehran and Europe. French President Emmanuel Macron said: "France, Germany, and the UK regret the US decision to leave the JCPOA. The nuclear non-proliferation regime is at stake.''

Trump’s move comes despite a burst of last-minute diplomacy, including a visit by British Foreign Secretary Boris Johnson and a call from Macron.

European diplomats fear Trump's move has no long-term strategy, and that the US president is pandering to Iran hawks in his administration.

The announcement means that the US is now on a path to abandoning the deal, which was enshrined in international law in a 2015 UN Security Council resolution.

The US will now be in breach of the agreement by reintroducing sanctions on Iran, and stands isolated among its allies.

'A great loss to arms control'

The deal, known formally as the Joint Comprehensive Program of Action (JCPOA), requires Iran to give up its stock of 20 percent enriched uranium, halt production and limit research of new nuclear centrifuges, and allow extensive international inspections of its nuclear facilities by the International Atomic Energy Authority (IAEA).

In announcing the withdrawal, Trump also ignored a warning from IAEA chief Yukiya Amano, who said that in Iran his agency had the world's most robust nuclear verification regime. If the deal failed, it would be "a great loss," he added.

Ben Rhodes, a former advisor to President Obama, said Trump was “blowing up” the deal with “no plans for what comes next, no support from our closest European allies, Russia or China”.

Despite the US pull-out, diplomats in European capitals are hoping to stick with the deal in some form, but there are doubts over whether this is a practical option.

They could invoke a 100-day dispute mechanism inside the deal in an attempt to prevent its immediate collapse.

Trump, however, is now surrounded by fierce critics of the deal, including John Bolton, his new national security advisor, and any European move is likely to be met with displeasure in Washington.

Israel and Saudi Arabia, both key US allies in the region, have also lobbied hard against the deal, claiming security concerns and a sunset clause that allows Iran to restart nuclear enrichment once the deal ends in 2025. Both welcomed Trump's announcement on Tuesday.

Other parties to the deal, including China, have pointed out that the IAEA has verified Iran’s compliance with the accord on no fewer than 10 occasions, and that the deal has put into place strict monitoring and verification measures on the Iran nuclear programme.

Both deadlines are meant to give firms and other entities time in which to conclude trade and other business activities with or in Iran, the US Treasury Department said on Tuesday.

The United States will reimpose sanctions on the purchase or acquisition of US dollars by the Iranian government, Iran's trade in gold and precious metals, and on the direct and indirect sale, supply and transfer to or from Iran of graphite, raw or semi-finished metals, coal and industrial-related software.

When the 90-day period expires, sanctions also will be reapplied to the importation into the United States of carpets and foodstuffs made in Iran, and on certain related financial transactions.

On 4 November, sanctions will be reinstated on Iran's energy sector and on the provision of insurance or underwriting services.

They also will be reapplied to petroleum-related transactions, including purchases of Iranian oil, petroleum products or petrochemical products, with the government-owned National Iranian Oil Company and other firms, and on Iran's shipping and shipbuilding sectors.

With the expiration of the 180-day period, the United States will reimpose sanctions "as appropriate" on individuals who were on US blacklists on 16 January 2016, the date when most sanctions on Iran were suspended under the nuclear deal.

It will also bring political difficulties for Rouhani, a moderate cleric who pushed the deal as a way to boost the country’s economy.

He has staked much of his political credibility on the deal - which hasn’t brought Iran the economic benefits it had hoped for - and its collapse could give his hardline opponents more power, observers say.

“Our enemies including America, the Zionist regime and the allies in the region should know that Iran has prepared for the worst scenarios and threats.”

Trump’s decision is also likely to be closely monitored across the Middle East, where a number of regional powers are considering whether to push forward with their own civil nuclear programmes.

Also ahead of Trump's speech, Jake Sullivan, a former chief foreign policy advisor to Hillary Clinton, said: "The only reason POTUS has to walk away from the deal right now, is because it was negotiated by President Obama...that's no reason for a commander-in-chief to play around with American national security." 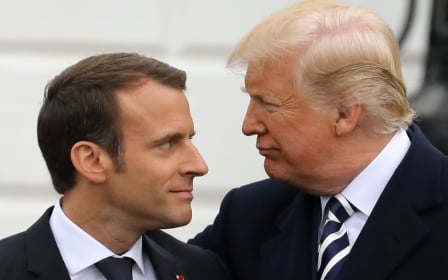 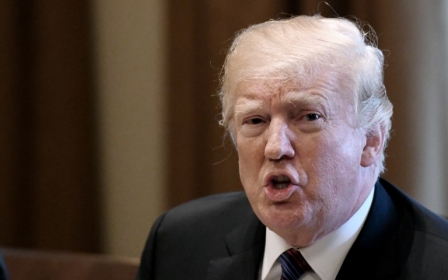 Iran nuclear
Iran: We will stay in nuclear deal, even if US withdraws