President Donald Trump seized on the fatal New York City truck attack to press his call on Wednesday for tighter immigration measures to prevent terrorism, asking Congress to end the visa programme under which the Uzbek immigrant suspect entered the United States.

Trump also said he would consider sending the suspect, identified by authorities as Sayfullo Saipov, to the military prison at the US naval base at Guantanamo Bay, Cuba, which his Democratic predecessor Barack Obama tried but failed to shut.

The Republican president tried to assign some blame for the attack to the Democrats' Senate leader, Chuck Schumer, who struck back in a speech on the Senate floor by saying that Trump should stop "politicising and dividing America" at times of national tragedy.

The Department of Homeland Security said Saipov entered the United States in 2010 through the so-called diversity visa programme, designed to provide a path to US residency for citizens from countries with historically low rates of immigration to the United States.

Authorities said Saipov drove a rented truck along a bike path in lower Manhattan, killing eight people. Police shot and wounded Saipov before arresting him, in what was described as a terrorist attack inspired by the Islamic State (IS) group.

According to the criminal complaint against him, Saipov told investigators he was inspired by IS videos he had watched on his cellphone, chose Halloween for the attack because he believed more people would be on the streets, and had originally planned to strike the Brooklyn Bridge as well as the bike path.

Trump called the suspect "this animal".

He also reprised what has been his stance as a White House candidate and as president - that tougher immigration laws should be a first line of defence against such attacks.

"I'm going to ask Congress to immediately initiate work to get rid of this programme," Trump told reporters at the White House.

Schumer helped create the diversity visa programme in 1990 when he was a member of the House of Representatives, but he was also a member of a group of lawmakers who crafted a bipartisan immigration bill in 2013 that would have done away with the programme. That bill was passed by the Senate but killed by the Republican-led House.

The programme, via a lottery system, selects as many as 50,000 people a year who receive US visas, and eventually permanent residence in the United States. Those selected undergo US security checks before being allowed to immigrate.

It has been criticised as being vulnerable to fraudsters and because it can allow in low-skilled immigrants with no connection to the United States.

"The terrorist came into our country through what is called the 'Diversity Visa Lottery Program,' a Chuck Schumer beauty. I want merit based," Trump wrote on Twitter.

Saipov was charged in federal court on Wednesday with acting on behalf of the Islamic State (IS) group.

The suspect, 29, who was hospitalised after a police officer shot and arrested him, ending Tuesday's rampage, confessed to authorities while in custody that he began planning the attack a year ago, according to the criminal complaint filed against him.

The 10-page complaint said Saipov waived his rights to remain silent and avoid self-incrimination in agreeing to speak to investigators without an attorney present from his Bellvue Hospital Center bed in Manhattan.

The complaint also said Saipov had requested permission to display Islamic State's flag in his hospital room and said he felt good about what he had done.

US justice officials announced on Wednesday they had found a second Uzbek man they were seeking in relation to the New York attack that killed eight people on a cycling and jogging path.

Less than an hour after the FBI released posters with a picture of Mukhammadzoir Kadirov, 32, and appealed for information, William Sweeney, the assistant director of the FBI's New York field office said he had been located.

"We are no longer looking for the person the information went out about," Sweeney told a news conference.

"We have found him and I'll leave it at that."

Trump on Wednesday also renewed his call for ending "chain migration" in which a legal immigrant may apply for relatives abroad to come in as well. Trump said there were "23 people that came in or potentially came in" with Saipov.

Trump in August threw his support behind a bill developed by two Republican senators that would cut legal immigration by 50 percent over 10 years by reducing the kinds of relatives immigrants can bring into the United States.

On Wednesday, he accused congressional Democrats of blocking immigration legislation that would make the nation safer.

"We have a lot of good bills in there. We're being stopped by Democrats because they're obstructionists. And honestly, they don't want to do what's right for our country," Trump said.

As a presidential candidate, Trump called for a total ban on Muslims entering the country as a security measure.

Since taking office in January, he has pursued steps to crack down on immigration from some countries. Courts have blocked his latest executive action barring entry into the United States by people from several Muslim-majority countries.

Democratic New York Governor Andrew Cuomo said that by politicising the attack, the president played into the hands of terrorists.

The 2016 lottery attracted about 17.6 million applicants. Just a fraction of 1 percent of them eventually received visas to the United States, according to the latest State Department figures available.

Because it has relatively few educational or professional requirements, the programme tends to attract people from poorer countries. In the West African countries of Ghana and Sierra Leone, for instance, more than 6 percent of the population in each entered the lottery in 2015. 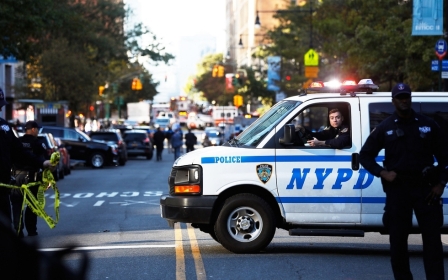