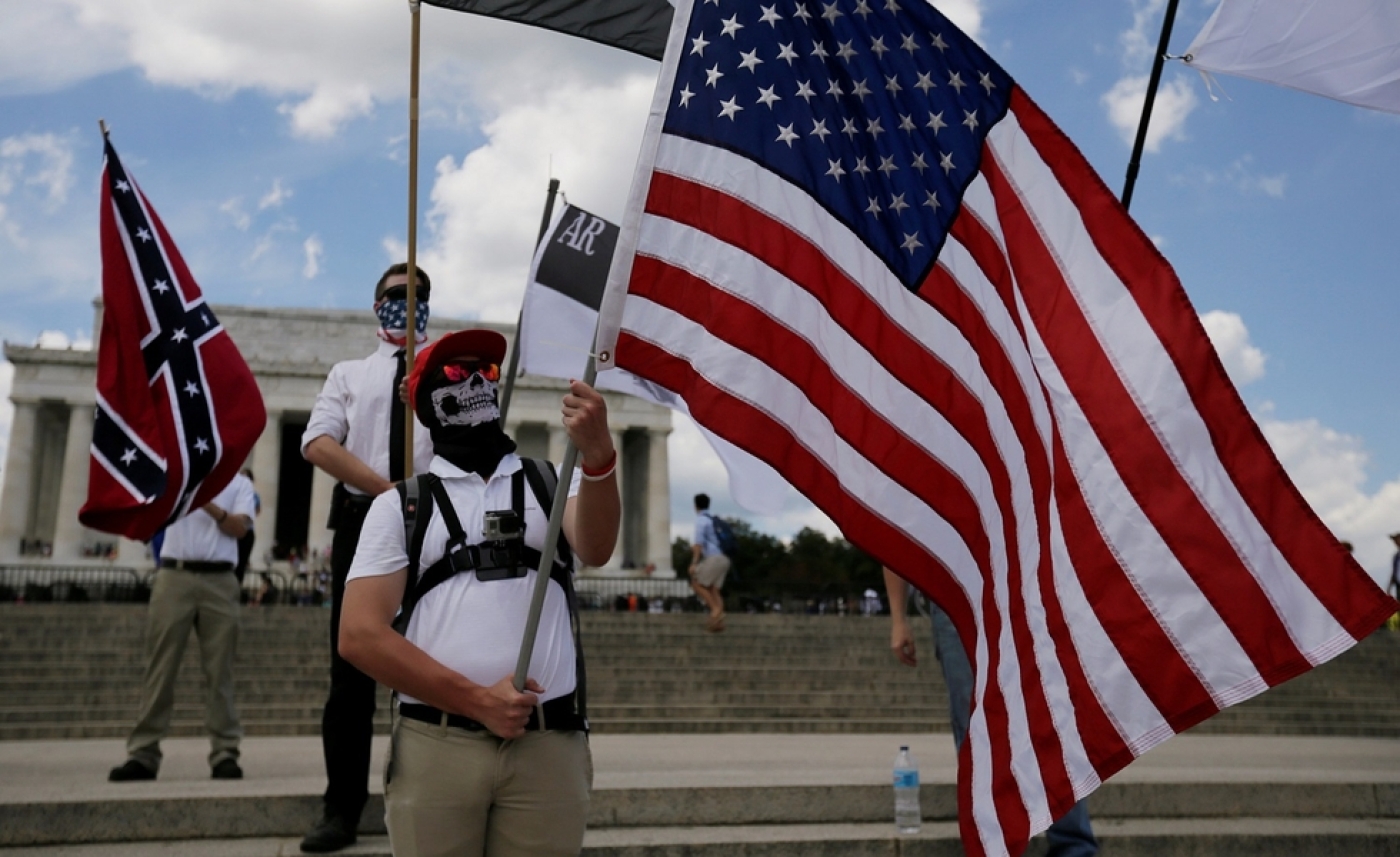 At a time when hate crime and right-wing violence are on the rise in the United States and globally, the Trump administration has rescinded a government grant to an organisation that aims to rehabilitate neo-Nazis.

The funding for Life After Hate, initially announced in January during the last days of Barack Obama presidency, was part of Countering Violent Extremism (CVE), an anti-radicalisation programme that has raised civil rights concerns within Muslim communities.

The Department of Homeland Security (DHS), which runs the initiative, has always stressed that CVE does not target Muslims, but works to identify and prevent individuals from veering towards all forms of extremism.

In its January announcement, DHS pointed specifically to Life After Hate in a press release to highlight efforts to counter right-wing extremism.

It's almost as if this administration is saying far-right white extremism is no longer a security concern.

"Among the awardees are organisations devoted specifically to countering ISIL's recruitment efforts in our homeland, and Life After Hate, an organisation devoted to the rehabilitation of former neo-Nazis and other domestic extremists in this country," the department said in a statement, using a different acronym for the Islamic State (IS) group.

Rescinding the $400,000 CVE grant to Life After Hate leaves the programme without a single group that explicitly specialises in tackling white extremism.

Sammy Rangel, the group's executive director, said the organisation consists mostly of former members of white supremacist groups who have come together to help combat the hate that they once espoused.

"We try to do that from a place of compassion and forgiveness," Rangel told MEE

"Our core purpose is helping others reform ideologies. We do that by sharing space with them, supportive listening.

"We have online support that we offer. We also do face-to-face interventions and meetings with people who are questioning their membership or how to exit those lifestyles."

He said there had been accurate concerns in Washington late last year that CVE would only tackle Islamist extremism under the presidency of Donald Trump.

"It's almost as if this administration is saying far-right white extremism is no longer a security concern. It almost legitimises it," he said. "With the data that's out there, the vast majority of domestic terrorist incidents in the last several years have been committed by far right, white extremist groups."

Media reports earlier this year suggested that Trump will focus counter-extremism efforts solely on Muslims. While cancelling CVE funding for Life After Hate appears to be a step in that direction, DHS says the programme remains committed to combating all kinds of radicalisation.

"The programme has not been altered to focus on any one type of violent extremism," DHS spokesperson Lucy Martinez told MEE in an email on Wednesday.

"Of the 26 projects announced today, 16 projects are equipped to combat all forms of violent extremism, including white supremacist violent extremism. 10 focus on ISIS and/or other foreign terrorist organization recruitment and radicalization of Americans."

ANALYSIS: Connecting dots from anti-Muslim stabbings to the White House
Read More »
Martinez rejected the characterisation that Life After Hate was "excluded" from CVE. She said "additional priorities were applied to the existing pool of applicants", including willingness to cooperate with law enforcement.

The Muslim Public Affairs Council (MPAC), a national organisation whose stated mission is to improve policies that impact Muslims, also lost a $400,000 grant after the new standards were applied.

MPAC president Salam Al-Marayati said the government has dismantled a bridge for Muslim communities to engage on the issues.

"It's going to go back to a hard-power counter-terrorism policy, where it's all going to be law enforcement-driven," Marayati told MEE.

CVE has always been controversial within Muslim communities. The programme, which bears similarities to the UK's Prevent, has been denounced by activists for singling out Muslims and creating a climate of fear and self-censorship in their communities.

Abed Ayoub, the legal director of American-Arab Anti-Discrimination Committee (ADC), told MEE that omitting Life After Hate from CVE reveals the "true colours" of the programme.

It's a continued slap in the face for communities that are suffering from terrorist acts and violent behaviour of these right wing extremist groups.

"The message it sends is the message we've been sending from the beginning, and that is: the government's CVE programme is flawed, problematic and shouldn't exist because it focuses on the Arab and Muslim community," Ayoub said.

"It does not focus on the real issues and the real threats facing this country."

However, Marayati, of MPAC, said the changes in CVE under the Trump administration do not confirm earlier criticism to the initiative.

"It actually argues the opposite," he said. "That the Trump administration is also moving away from CVE, and it's trying to kill it - for other reasons.

"They don't want communities involved. They want to be top-heavy with governments telling communities what to do. For those who wanted to completely eliminate it, be careful what you wish for because now the alternative can be much worse."

Marayati said everyone knows the flaws in government programmes, but engagement is needed to make policies more balanced and reasonable.

Leaders Advancing and Helping Communities (LAHC), a human services group that works with a predominantly Arab community in the Detroit suburb of Dearborn, turned down a $500,000 CVE grant earlier this year.

"It's a continued slap in the face for communities that are suffering from terrorist acts and violent behaviour of these right-wing extremist groups, showing them that the administration does not care about the negative impact of white supremacy," she told MEE.

"They're further proving that there is no desire to protect all constituents in this country."

Christian Picciolini, a co-founder of Life After Hate, said cancelling the grant to the organisation will amplify Muslims' suspicions of CVE.

"If we're going to truly counter violent extremism, we must do so in a balanced and genuine way," he told MEE in an email.

While activists may disagree about the merits of CVE, Muslim advocates are in agreement that the government is not taking proper steps to quell the flames of right-wing extremism that have turned into deadly attacks.

In May, Trump sent a tweet condemning an attack on a train in Portland, Oregon, where a passenger fatally stabbed two people who came to the defence of some young Muslim women he was harassing. After his inauguration in January, he told perpetrators of hate crimes to "stop it".

The government's CVE programme is flawed, problematic and shouldn't exist because it focuses on the Arab and Muslim community.

Asked if the Trump is doing enough to combat violent white supremacy, Marayati said: "No, if anything, he's fuelling that kind of bigotry, if not validating it with his rhetoric."

He added that victims of hate crime deserve more than a tweet and cited Trump's failure to condemn the shooting in a mosque in Canada's Quebec City in January, which claimed six people.

Trump was also silent after a terrorist attack against Muslim worshippers at a Finsbury Park mosque in London in June.

Marayati said the administration is not engaging faith communities in dialogue.

"Instead, this president goes to Saudi Arabia to preach peace and tolerance to Muslims, when he could have done more for that issue here in the United States with Muslims, Christians and Jews," Marayati said.

"This administration has it backwards, and unfortunately, their policies and their rhetoric is doing the opposite of bringing people together in America."

Rangel, of Life After Hate, said there has been an increased need for the organisation's services since the election.

"The correlation is there," he said.

Rangel said the Trump campaign has highlighted tensions in the country with the way it addressed race issues and its failure to denounce far-right movements that it was allegedly affiliated with.

Trump called undocumented immigrants "rapists" when announcing his presidency in 2015. He has also called for a complete ban on Muslims entering the United States. His chief strategist, Steve Bannon, was formerly the head of Breitbart, a far-right news website popular among white supremacists.