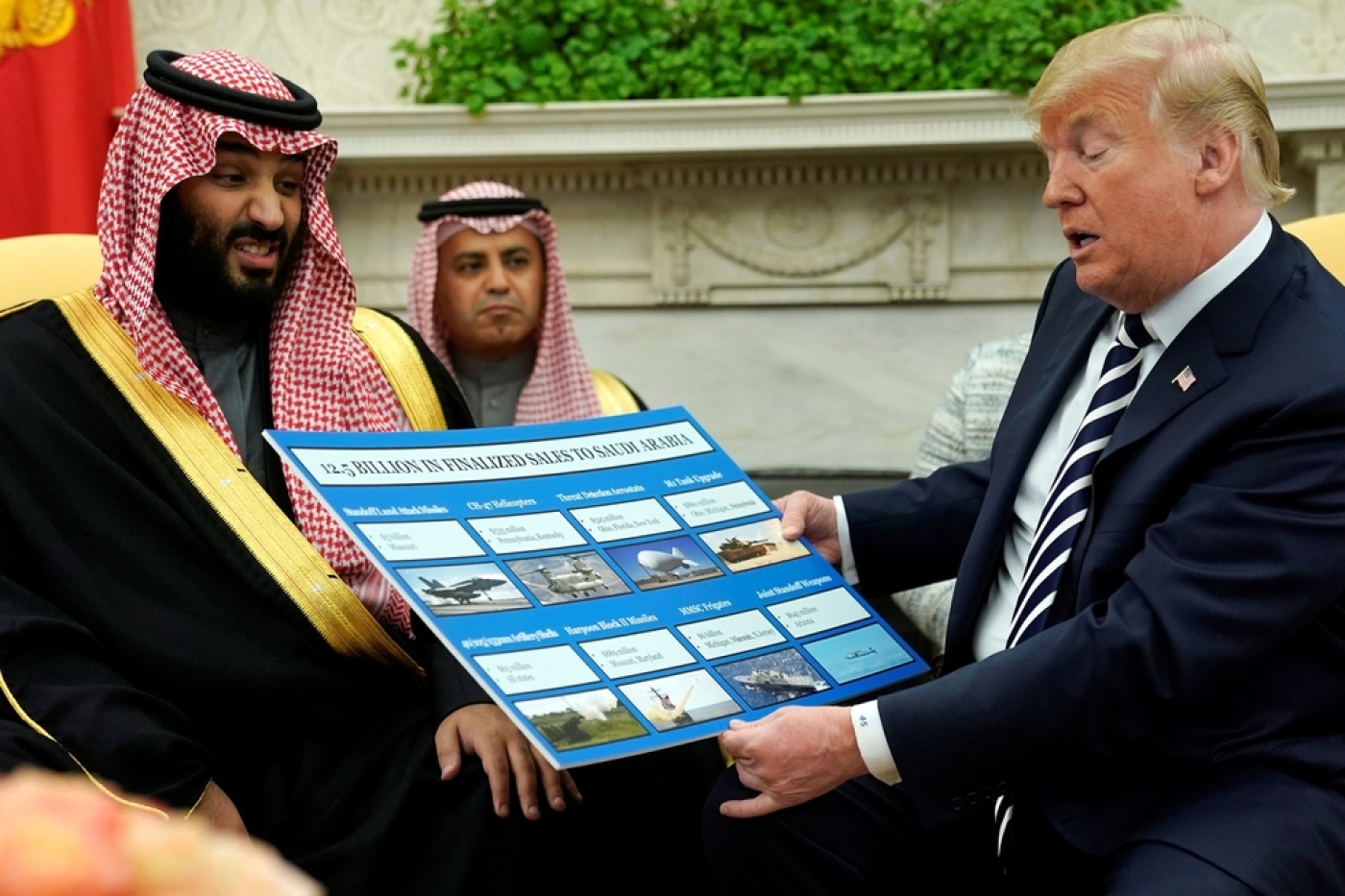 Trump holds a chart of weapon sales as he welcomes Mohammed bin Salman in the Oval Office, 20 March (Reuters)
By
MEE and agencies

Meanwhile, in the US Senate, lawmakers killed a measure seeking an end to US support for Riyadh's bombing campaign in Yemen.

The Senate voted 55-44 to dismiss the resolution, which sought for the first time to take advantage of a provision in the 1973 War Powers Act that allows any senator to introduce a resolution on whether to withdraw US armed forces from a conflict not authorised by Congress.

In the Oval Office, Trump and the crown prince lauded the strength of US-Saudi ties, which had grown strained under the Obama administration in part over differing views towards Riyadh's regional rival Iran.

Not so with Trump, who has taken a hardline view against Iran similar to that of the Saudi crown prince who has compared Iran's supreme leader to Adolf Hitler.

'Saudi Arabia is a very wealthy nation, and they're going to give the United States some of that wealth, hopefully, in the form of jobs, in the form of the purchase of the finest military equipment anywhere in the world'

The talks were part of the first visit by the prince to the United States since he became the heir apparent last year to succeed King Salman.

Trump's red-carpet treatment highlighted his administration's strong backing of the crown prince, who carried out a purge against businessmen and fellow royals that consolidated his power and whose aggressive foreign policy has caused unease among some Western allies.

At the same time, the kingdom has witnessed a cautious new climate of social freedoms with the rise of the 32-year-old crown prince to power after decades of elderly rulers.

Trump and bin Salman discussed an agreement last year for $200bn worth of Saudi investments with the United States, including large purchases of US military equipment. Trump said the military sales contributed to the creation of 40,000 American jobs.

Trump held up charts to show the depth of Saudi purchases of US military hardware, ranging from ships to missile defence to planes and fighting vehicles.

"Saudi Arabia is a very wealthy nation, and they're going to give the United States some of that wealth, hopefully, in the form of jobs, in the form of the purchase of the finest military equipment anywhere in the world," he told reporters.

The crown prince, who is also the defence minister, is on a public relations blitz while travelling in the US, with stops in New York, Boston, Seattle, Los Angeles, San Francisco and Houston to cultivate investments.

Bin Salman capped his rapid rise to power last June by replacing his elder cousin Prince Mohammed bin Nayef, who had close relationships with US intelligence and defence circles, as crown prince. He is likely to rule for many decades if he succeeds his father.

Trump praised the king's move to elevate Mohammed and called US-Saudi ties strong as ever.

"I thought your father made a very wise decision. And I miss your father - a special man," he said. King Salman is to visit the United States later this year.

The crown prince, speaking English, said on Tuesday the Saudi pledge of $200bn in investments will end up at $400bn when fully implemented. He said a 10-year window for implementing the deal was already underway.

"This is a signal that there (are) a lot of things (that) could be tackled in the close future and more opportunities. And that’s why we are here today, to be sure that we’ve tackled all the opportunities and achieve it and also get rid of all the threats facing our both countries," he said.

Also high on the agenda in the White House talks was confronting Iran, a country Trump has repeatedly criticised.

Saudi Arabia on Monday called the Iran nuclear deal a "flawed agreement," and Trump has made clear he plans to exit the agreement unless changes are made to it.

"But Iran has not been treating that part of the world or the world itself appropriately. A lot of bad things are happening in Iran. The deal is coming up in one month and we’ll see what happens."

As the Saudi prince and US president talked, US senators debated Yemen. The war in the impoverished country has killed more than 10,000 people, caused a cholera outbreak and dragged the country to the verge of famine in what UN officials have called the "largest man-made humanitarian crisis".

A Saudi-led coalition, with logistical and intelligence support from Washington, is fighting Yemen's Houthi rebels, who are allegedly backed by Tehran.

Senator Bernie Sanders, a lead sponsor of the legislation, noted the deaths of thousands of civilians, displacement of millions, famine and potentially the largest cholera outbreak in history because of the conflict.

"That is what is going on in Yemen today as a result of the Saudi-led war there," Sanders said.

Senator Bob Corker, chairman of the chamber's foreign relations committee, said senators had questioned the crown prince closely about Yemen during a meeting with him on Tuesday.

The Saudi embassy said the prince discussed with members "countering the threat posed by Iran and the Iran-backed Houthi militias" as well as Saudi "efforts to address and alleviate the humanitarian situation in Yemen".

The Houthis deny receiving help from Iran and say they are fighting a revolution against corrupt politicians and Gulf powers in thrall to the West. 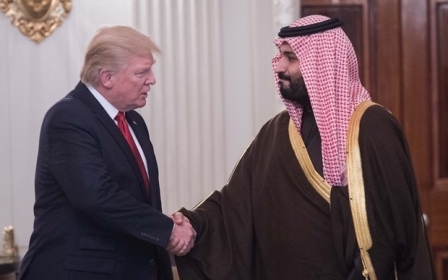 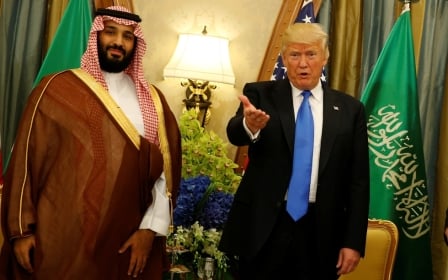 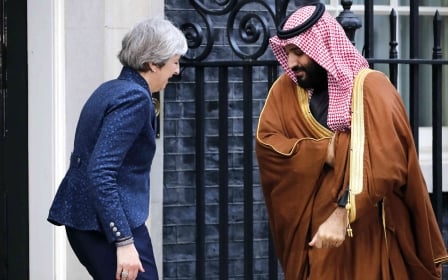