Chaos at US Capitol as Trump supporters breach Senate chambers

Supporters of President Donald Trump break into Capitol building, where both chambers were in session debating objection to election results 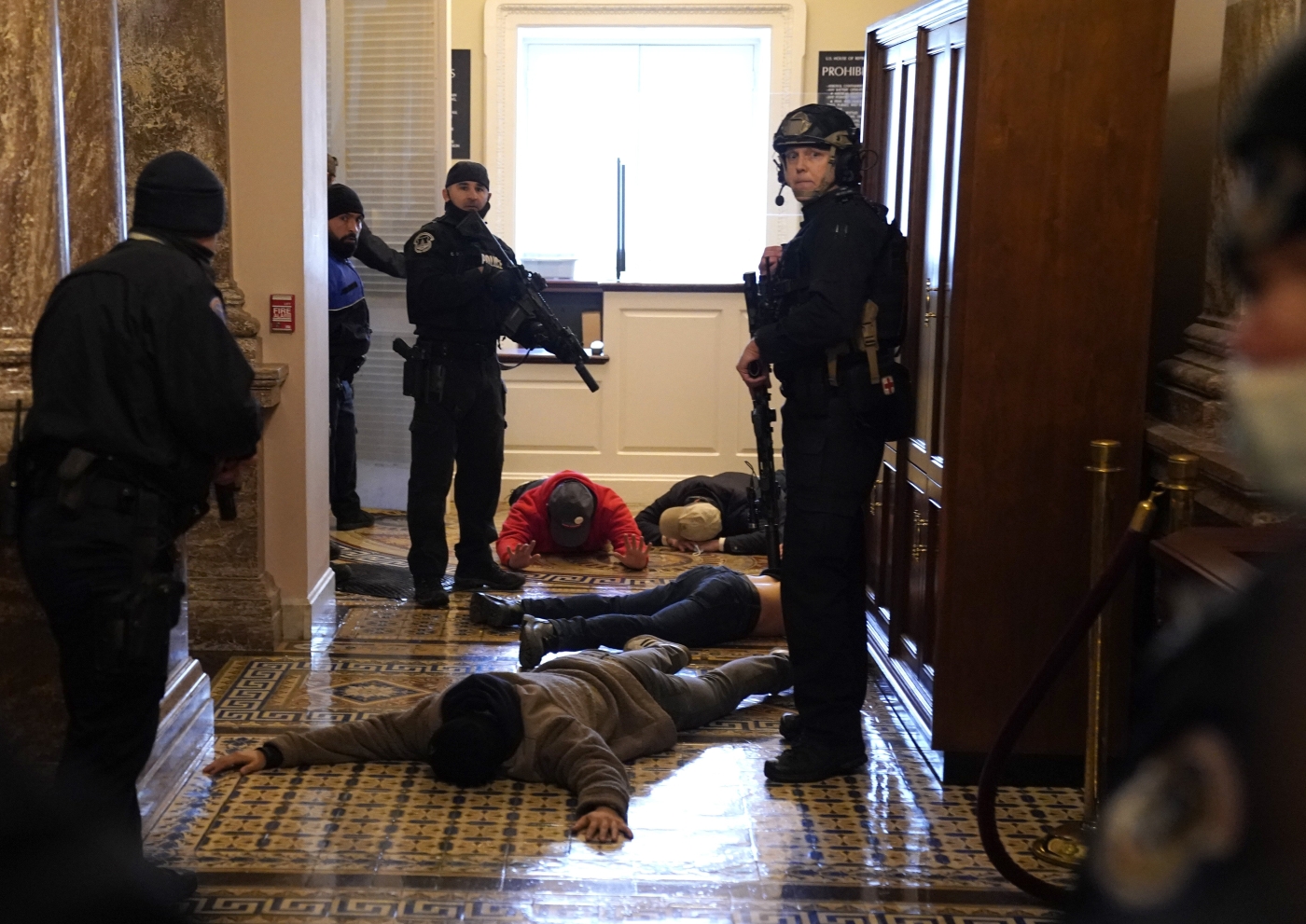 US senators and members of the House were forced to evacuate as pro-Trump supporters violently stormed the Capitol building on Wednesday.

Both chambers of Congress, including US Vice President Mike Pence, were gathered in the Capitol to certify the 2020 election win of President-elect Joe Biden.

The pro-Trump protest against Biden's certification had been planned for weeks and was encouraged by President Donald Trump, who spoke at a demonstration earlier in the day.

Trump supporters seemed to enter the building through the National Statuary Hall, a chamber in the US Capitol devoted to sculptures of prominent Americans, before reaching the chamber doors of the US Senate.

Rioters were seen breaking windows outside the Capitol and climbing through.

At least a dozen were able to enter the evacuated House chamber, gathering inside.

BREAKING: Protesters are on the Senate floor now: pic.twitter.com/k4Q0ln8pZs

"They're in the chamber," tweeted Igor Bobic, a politics reporter with the HuffPost who was inside the Capitol. "One is up on the dais yelling 'Trump won that election!' This is insane," he said.

They’re in the chamber. One is up on the dais yelling “Trump won that election!” This is insane pic.twitter.com/p6CXhBDSFT

Another rioter breached the Senate floor, with security pulling their firearms to stop the individual from fully entering. Senators in gas masks were seen in images taking cover during the incident.

One woman, who has yet to be identified but appeared to have been one of the rioters, was shot inside the Capitol building and evacuated to a nearby hospital where she succumbed to her wounds.

Another showed Trump supporters discharging a fire extinguisher outside the Senate chamber towards law enforcement officers.

Trump protesters just discharged a fire extinguisher outside Senate chamber. Many protesters are inside building, and most people are hiding from them pic.twitter.com/0y2sk8LHWd

Pence was evacuated from the Senate chamber earlier, during the hearing, because of the security situation and both chambers were recessed from the proceedings.

House Representative Elaine Luria tweeted that she had been evacuated from her office after a bomb threat.

"I just had to evacuate my office because of a pipe bomb reported outside. Supporters of the President are trying to force their way into the Capitol and I can hear what sounds like multiple gunshots," Luria said.

The sounds she heard could have been tear gas, which CNN reported had been released on rioters inside the rotunda, the large, domed, circular room located in the centre of the US Capitol.

"I don't recognize our country today and the members of Congress who have supported this anarchy do not deserve to represent their fellow Americans," Luria tweeted.

Neighbouring congressional office buildings were also under evacuation orders as rioters clashed with law enforcement, who responded with tear gas, according to local reports.

Bobic also posted a video of several Trump supporters climbing onto the scaffolding outside the Senate, appearing to reach an area outside Senate Majority Leader Mitch McConnell's office.

"[They] took it to [the] second floor, which looked like the area where McConnell’s office is located, and started banging on windows," Bobic said.

Several people got on to a scaffolding outside Senate, took it to second floor, which looked like the area where McConnell’s office is located, and started banging on windows pic.twitter.com/IIZ21nkzFT

McConnell had condemned Trump's efforts to overturn the election, speaking out on Wednesday against legislators who sought to object to the election results.

Republican Senator Mitt Romney told a New York Times reporter as legislators and media people arrived at a secure location: "This is what the president has caused today, this insurrection."

The Times, citing defence and administration officials, later reported that it was Vice President Mike Pence, not Trump, who approved the order to deploy the DC National Guard later on Wednesday. It was unclear why the president, who is still the commander in chief, did not give the order, the Times said.

Trump fell short of calling on his supporters to withdraw from the Capitol, but asked them to "remain peaceful".

"I am asking for everyone at the U.S. Capitol to remain peaceful. No violence! Remember, WE are the Party of Law & Order – respect the Law and our great men and women in Blue. Thank you!," he tweeted, more than an hour into the chaos.

Hours later and after an explosive device was found at the Republican National Committee (RNC) headquarters, Trump posted a contradictory video telling his supporters "you have to go home now".

“We have to have peace. We have to have law and order. We don’t want anyone hurt," the president said, while still offering encouragement, telling his supporters: "We love you. You’re very special," and "I know how you feel".

Facebook and YouTube took down the president's video, with Guy Rosen, who oversees Facebook's work on safety & integrity, tweeting that the video "contributes to rather than diminishes the risk of ongoing violence".

Meanwhile, Twitter blocked the video, along with two other tweets, and locked the president's account for 12 hours. The social media network said Trump had to manually delete the three posts before his account would be unlocked.

"Future violations of the Twitter Rules, including our Civic Integrity or Violent Threats policies, will result in permanent suspension of the @realDonaldTrump account," one of the company's official accounts posted. US Politics
Has the US developed an immunity to critical thinking?
Marco Carnelos