'We dumped it in the trash': Trump's letter to Erdogan gets hostile reception 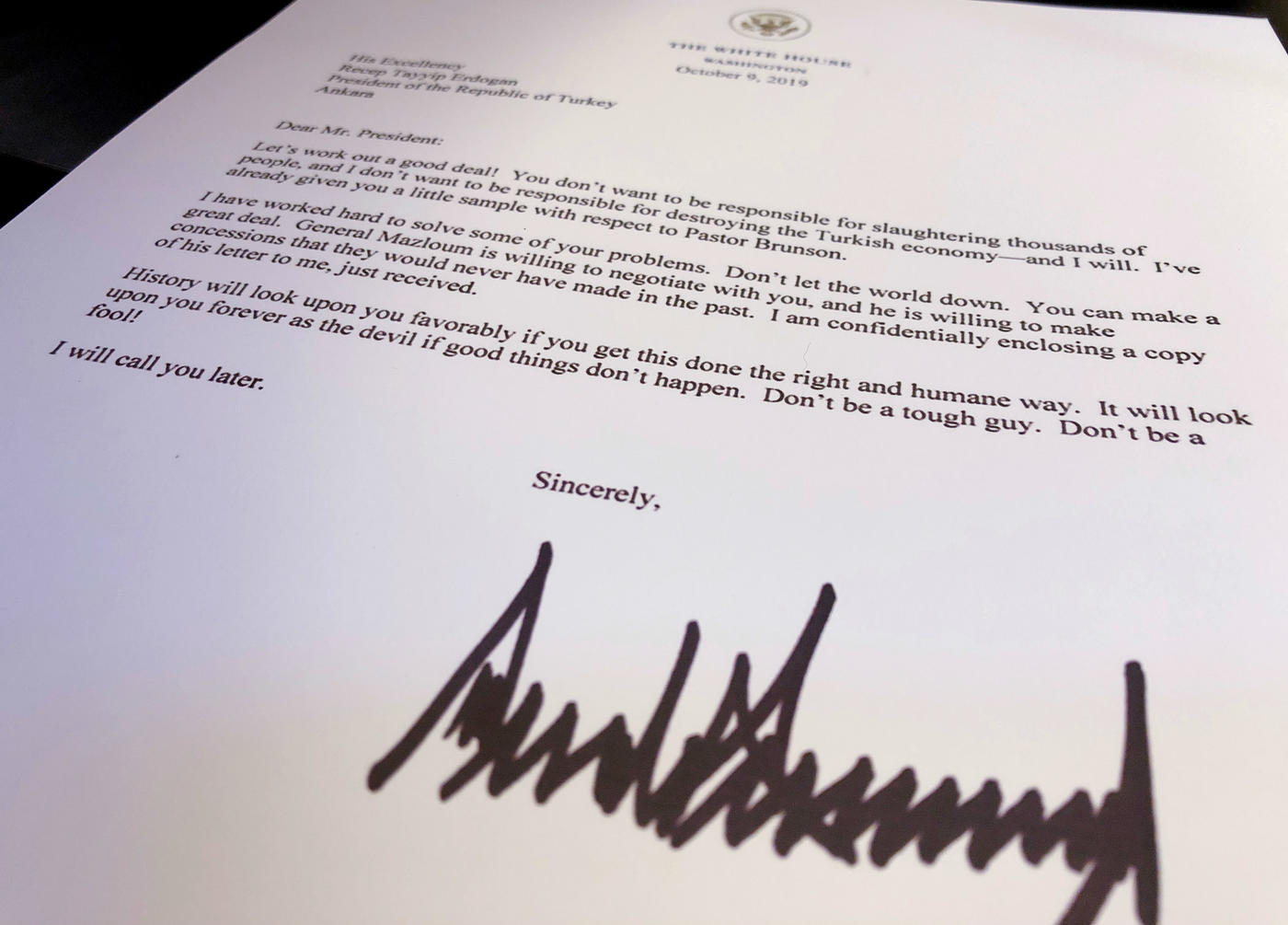 A leaked letter written by US President Donald Trump to Recep Tayyip Erdogan warning his Turkish counterpart not to be a “fool” has sent shockwaves around Turkey due to its lack of protocol and seriousness.

Dated 9 October, the day Erdogan launched an offensive in northeastern Syria against the US-backed Syrian Democratic Forces (SDF) militia, the letter aimed to make a deal between Turkey and the SDF and included an open economic sanctions threat.

Yet this wasn’t the part Turks focused on.

“It will look upon you forever as the devil if good things don’t happen,” Trump wrote. “Don’t be a tough guy. Don’t be a fool!”

I have worked hard to solve some of your problems. Don't let the world down. You can make a great deal. General Mazloum is willing to negotiate with you, and he is willing to make concessions that they would never have made in the past. I am confidentially enclosing a copy of his letter to me, just received.

I will call you later.

Seemingly, the letter was leaked to confront those in the United States criticising Trump for waving through the Turkish offensive by pulling US troops from Syria.

It has now been confirmed as genuine by the White House, but soon after the leak on Wednesday, thousands of Turks asked each other on Twitter and WhatsApp whether the letter was authentic or a joke.

“If this letter is real, Trump is absolutely completely crazy,” one Turk tweeted.

Turkish officials, speaking on condition of anonymity, told Middle East Eye that they responded to Trump’s letter in kind and with stronger language.

“We just dumped his letter into the trash,” one of them said.

“The date on the letter is 9 October, the same day we began Operation Peace Spring. Our president gave the best response by launching the operation on the same day at 4pm,” the official told MEE.

The leak comes at a particularly sensitive time, with US Vice President Mike Pence touching down in Ankara on Thursday in a bid to seek a ceasefire between Turkey and the Kurdish-led SDF.

“This Trump letter to Erdogan is the most damaging correspondence that could’ve been leaked ahead of VP Pence’s visit to Ankara tomorrow,” Soner Cagaptay, a prominent Turkey expert tweeted on Wednesday.

“Now, Erdogan has no option but to delay ceasefire in Syria, less he be humiliated in front of his nation as weak and bowing to America’s threat.”

'The Turkish nation and state were offended'

Russia on Thursday questioned the tone of the letter, describing it as "highly unusual".

"You don't often encounter such language in correspondence between heads of state. It's a highly unusual letter," Kremlin spokesman Dmitry Peskov told reporters on a conference call.

Meanwhile, former prime minister Ahmet Davotoglu said all meetings with US officials should be cancelled.

“The Turkish nation and state were offended,” he tweeted. EXCLUSIVE: 'Work with us in Syria or get out of the way'
Read More »

Since Washington’s surprise announcement that US personnel were leaving Syria, thereby exposing the SDF, its partner in the battle against the Islamic State group (IS), to Turkish attack, Trump has veered wildly between soft and hard stances on Turkey.

Tweets threatening to ruin Turkey’s economy have been followed by more sympathetic ones, such as a post on Wednesday saying the PKK, the Kurdish militant group Ankara says the SDF is an extension of, is worse than IS.

Turkish officials maintain that Trump must have seen that his attempts to reach a compromise so far had been totally ineffective. Erdogan on Wednesday batted away several calls for a truce.

“Yesterday he described PKK as a terror group worse than [IS]. With this background, we don’t expect Pence to come up with a proposal on beginning negotiations,” another official told prominent Turkish columnist Ahmet Hakan.

“If Pence comes with something like that, Erdogan will strongly refuse the offer and send him back home with empty hands.”

The see-sawing from the White House was already frustrating Turkey before this latest leak.

Erdogan earlier this week complained that he doesn’t understand what Trump wants anymore.

“We can no longer follow Trump’s tweets. We cannot track them. There is a stark change in his stance compared to last night,” he said. Syria War
Pressured by Assad and assaulted by Turkey, can the Rojava project survive?