The UK's High Court ordered news website Middle East Online (MEO) and one of its editors to pay Tunisian Parliament Speaker Rached Ghannouchi tens of thousands of pounds in damages after it claimed the Ennahda party, which Ghannouchi co-founded, supported terrorism.

Ghannouchi's law firm, Carter-Ruck, said that MEO and its editor Haitham El Zobaidi were told to pay £45,000 ($58,000) in libel damages following allegations that Ennahda received funding from Qatar and did not support democracy.

The damages came after the judge ruled in favour of Ghannouchi's lawsuit in a default judgement after MEO and Zobaidi failed to file a defence in May, court documents showed.

"The judgment remarked on the seriousness of the allegations, in circumstances where Mr Ghannouchi 'has a very real UK connection and reputation', and where the allegations had been published 'at a time where foreign governmental interference in domestic politics is a matter of worldwide speculation and concern'," Carter-Ruck's statement noted.

The statement added that Ghannouchi would donate the damages he receives from MEO and Zobaidi to a Tunisian charity.

Ghannouchi vigorously denied MEO's claims, according to an earlier statement put out by Carter-Ruck.

He had previously welcomed the court decision which ruled in favour of his libel claim with the Ennahda party saying the "defendant's failure to provide a defence" to the lawsuit only served to highlight "the baseless nature of the allegation."

Yusuf said the media arms of all three countries had been publishing "simultaneous deceitful news" about the parliament speaker, including claims that he had "gained huge financial wealth since his return to Tunisia" in 2011.

Ghannouchi has denied such allegations and official financial documents obtained by the Arabi21 news website last week refuted the claims.

Ghannouchi and several other Tunisian intellectuals founded the Islamic Tendency Movement in 1981, which became Ennahda in 1989, after being inspired by Egypt's Muslim Brotherhood.

The party was persecuted under the government of ousted leader Zine El AbIdine Ben Ali and that of his predecessor, Habib Bourguiba.

Ghannouchi was forced to live in exile in the UK for 20 years and returned home after the 2011 Arab Spring uprisings to a triumphant welcome, with Ennahda securing 37 percent of the vote in the county's first post-revolution election in 2011. 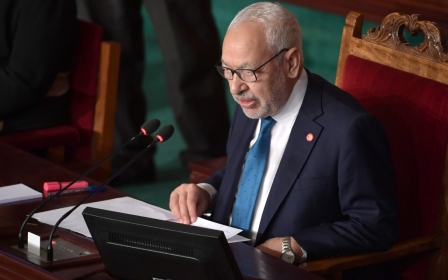