Thousands of Tunisians have gone to fight with the Islamic State group in Libya, Syria and Iraq 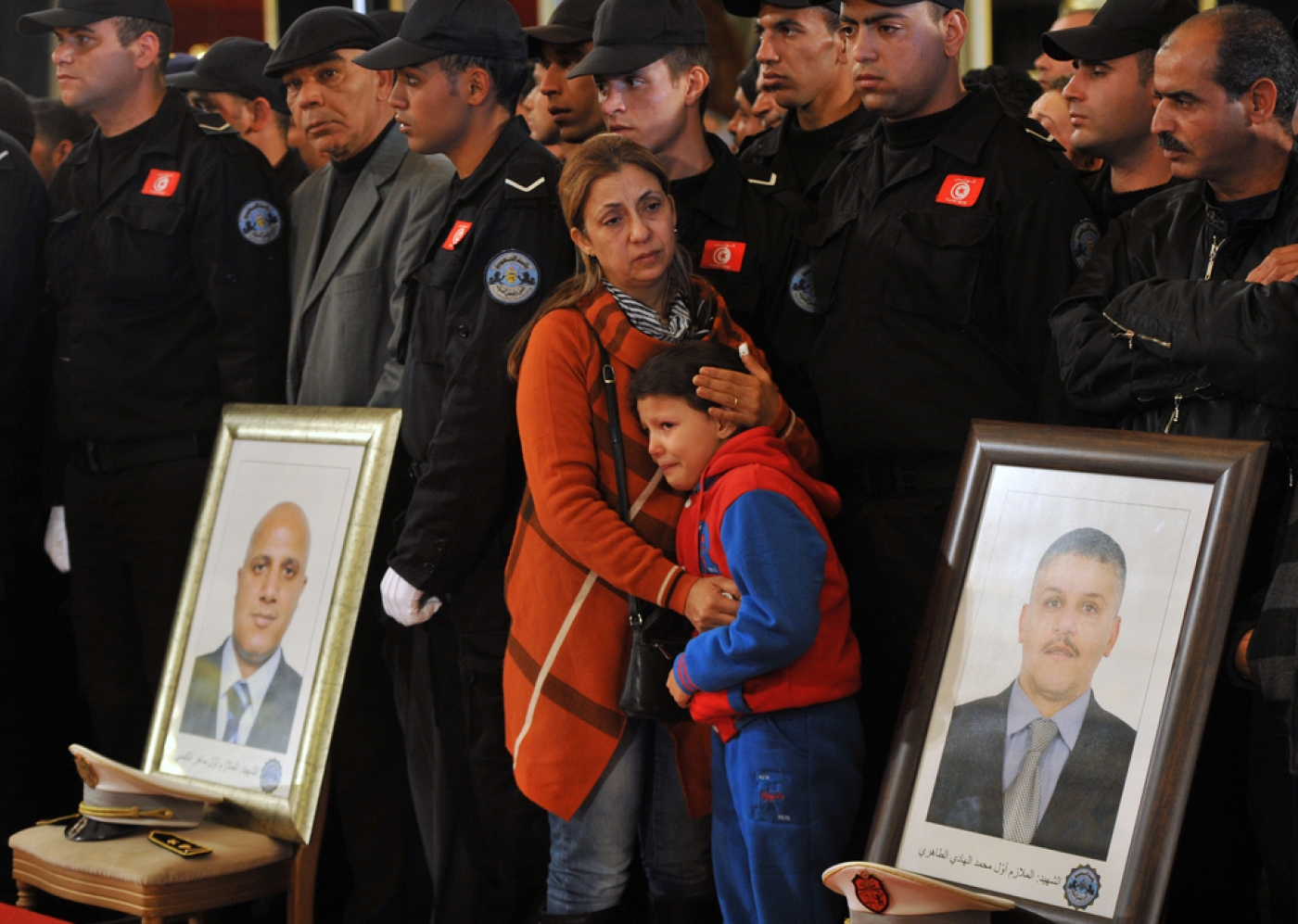 Tunisia said on Wednesday it is closing its border with war-torn Libya, a day after a deadly suicide bombing claimed by the Islamic State (IS) group.

No reason was given, but the interior ministry said earlier the explosive used in the attack that killed 12 presidential guards was the same used to make suicide belts illegally brought from Libya and seized last year.

The National Security Council, headed by President Beji Caid Essebsi, decided to close the frontier from midnight with "reinforced surveillance of maritime borders and in airports", a statement said.

It also decided to "step up operations to block (internet) sites linked to terrorism".

And authorities would "take urgent measures regarding people returning from hotbeds of conflict, in line with the antiterrorist law," the statement added, without elaborating.

Earlier, the transport ministry said security would be reinforced at ports and only passengers would be allowed to enter Tunis's international airport.

Thousands of Tunisians have travelled to Libya, as well as to Iraq and Syria, to fight alongside IS, the authorities say.

Tunisia's oil-rich neighbour has been riven by chaos and warfare since the 2011 overthrow of longtime leader Muammar Gaddafi, opening the way for IS to gain a foothold there.

IS said a Tunisian, Abou Abdallah al-Tounissi, had boarded a bus wearing an explosives belt only a few hundred metres from the interior ministry as it picked up guards on their way to work Tuesday.

In addition to the 12 killed, another 20 people were wounded, the health ministry said.

IS said 20 people had died.

After the blast Essebsi ordered a 9pm to 5am curfew for Tunis and a nationwide state of emergency, less than two months after a previous one had been lifted.

That was imposed in June after an IS gunman massacred 38 foreign tourists at the Mediterranean resort of Sousse.

In March, two IS militants stormed the National Bardo Museum in Tunis, killing 21 tourists and a policeman.

And just days ago, a militant group claimed the beheading of a young Tunisian shepherd on behalf of IS, accusing him of having informed the army about their movements.

'Tunisia will not bend'

Some presidential guards expressed concern that not enough was being done to protect them from attacks, noting that the bombing took place where they are routinely picked up to go to work.

"As usual, we got on the bus," one wounded guard said on national radio. "Just as the driver started to head off, the explosion occurred."

"For years this place has been our gathering point but they didn't think to change it, although we are the first to be targeted," another one said.

The site of the explosion was cordoned off, with forensic experts at work around the burnt-out shell of the bus.

Behind the barricades set up, dozens of ordinary citizens demonstrated in support of Tunisia's security forces, some carrying the national flag.

A year ago, a bus carrying troops was attacked by two armed men in northwest Tunisia, according to the defence ministry. Five soldiers were killed.

In July 2014, 15 soldiers were killed in the Mount Chaambi region near the Algerian border, in the worst such attack in the army's history.

The United States condemned the latest attack and offered to help Tunisia with its investigation.

"Terrorists have sought to use fear and violence to undermine the important gains the Tunisian people have made in pursuit of a democratic, stable and prosperous country," the White House said.

"Tunisia will not bend," said Le Temps, while Al-Maghreb called for "a new philosophy and special measures" to fight terrorism.

And that spirit of defiance was palpable among people who descended on central Tunis to watch movies being screened at the 26th Carthage Film Festival, some in venues only hundreds of metres from the bomb scene.

"I quickly put on my red lipstick and red jacket, the colour of our flag, and came downtown to watch a film, any film," said 32-year-old civil servant Wahiba.

"It's essential to show these enemies that we are not afraid of them."