The team beat the Rabat Capitals of Morocco 8-7 in a tightly fought match in the Moroccan capital.

Van de Putte wore the name “Fahem” on his jersey during the matches, in tribute to his late biological father, Riyad Fahem, a talented goal scorer for Tunisia’s national football team.

Like Fahem, Van de Putte is also a prolific goal scorer, putting his father’s talented genes on display for fans of hockey.

For Ihab Ayed, the president and founder of the Tunisian Hockey Association, the tournament victory is complete validation for all of the work he has put in.

“It was the best day of my life. I feel proud and happy. This championship has given me the strength to go further and continue to grow Tunisia’s hockey programme,” he told MEE.

The Tunisian team went unbeaten through the whole tournament, beating Egypt’s Cair Anabus 19-0 in the first match, before going to beat Algeria’s Algiers Corsaires 11-6, and then defeating Morocco Mallers 11-8 in the semi-final.

Tunisia’s team is comprised of young men from Tunisia’s diaspora, with players hailing from countries including Finland and Canada.

Ayed originally formed a squad of 25 players for a tournament in his hometown of Courbevoise, France in June 2014. The team lost, but bonded over nightly meals of cous cous, Tunisia’s most famous dish.

This summer’s tournament, which lasted from 24-30 July, took place in the Mega Mall of Rabat, which has a full-size ice hockey rink. Egypt and Algeria also have home rinks in their countries, while Tunisia has only two small rinks, neither of which is large enough for ice hockey matches. The team’s only time to practice is when it comes together for tournaments.

Despite the team’s lack of winter sport infrastructure within the country, Tunisian fans came out to support the squad, cheering them on and wearing the red and white colours of their country’s flag. Workers from the Tunisian Embassy in Morocco attended every game and were rewarded with a victory in each of them.

Tunisia’s team had previously received symbolic support from the Tunisian Ministry of Sports but nothing in the form of financial support. The ministry spoke with Middle East Eye previously and said that since the hockey federation is registered in France and not Tunisia, they could not provide funding.

However, since watching the team’s success, Sarhan Nasri, spokesman for the Ministry of Sports, told MEE: “The minister has been watching closely and has been calling founder Ihab Ayed non-stop. We now plan on expediting the federation formation process and have invited Ihab to visit us in Tunisia.”

The formation of the federation is the last step required before a full-size ice hockey rink can be built in Tunisia.

On social media, Tunisians have had mixed reactions, ranging from incredulity at the fact that Tunisia has a hockey team, all the way to pride.

The team’s players, who less than 10 years ago had no plans of playing for their father/motherland, are now also filled with pride for their country of origin. Tunisia Politics
Tunisians rally against bill that would pardon corruption 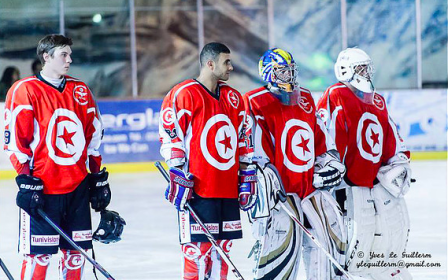