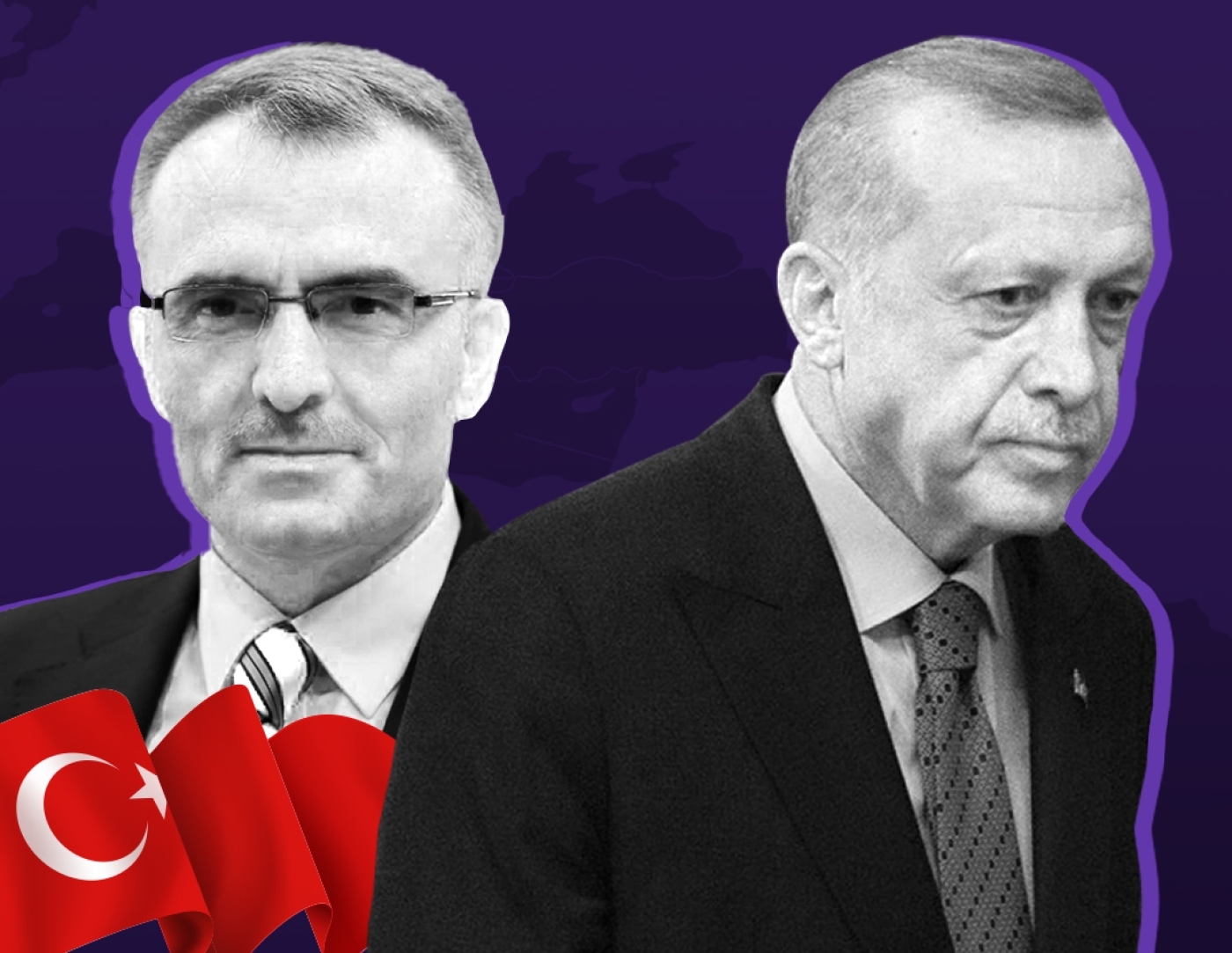 Naci Agbal, left, was in the job for only five months before he was sacked by President Recep Tayyip Erdogan, right (MEE)
By
Ragip Soylu
in
Ankara

Even some of the most ardent supporters of Turkish President Recep Tayyip Erdogan were truly shocked and angered last week by his decision to sack Naci Agbal, the central bank governor, less than five months after his appointment.

Turkish officials, technocrats, academics and others who have supported Erdogan in his ups and downs over the years this time couldn’t find any logical reason to fire Agbal, whose initial ascension to the job last November increased confidence in markets, stopped soaring US dollar exchange rates and led to more than $15bn inflows into the country.

'Erdogan's relationship with Agbal had been steadily deteriorating. Their communication wasn't good at all'

- Turkish official close to the president

"This was a very sad day. No one could reasonably explain why he did it so suddenly," a Turkish official told Middle East Eye, speaking on condition of anonymity. "Why did you appoint him in the first place just months ago if you were going to fire him?"

When Erdogan appointed Agbal as central bank governor, the markets perceived it as a pragmatic move to stop the lira's free-fall and restore order and confidence into the Turkish economy with an orthodox monetary policy.

His sudden firing depreciated the lira by around 10 percent versus the dollar, moved the country risk premiums to the highest points ever, and evaporated the profits made this year on the Istanbul Stock Exchange.

However, for those who are close to Erdogan, the firing wasn't really a surprise. "Erdogan's relationship with Agbal had been steadily deteriorating," said one Turkish official close to the president. "Their communication wasn't good at all."

When Erdogan appointed Agbal, who was previously his former budget director at the presidency, he also fell out with his son-in-law Berat Albayrak, who resigned as economy minister after the president discovered that the central bank's forex reserves were in tatters.

Erdogan named respected politician Lutfi Elvan as Albayrak's replacement, and started to talk about a "bitter pill" that the government needed to swallow.

"When Erdogan talked about the bitter pill, he meant officially moving the interest rates to the unofficial market rate," a source close to the Turkish presidency said. "Agbal's first 475 points increase was approved by Erdogan."

When Agbal made his first rate increase in November, the official rate was increased to 15 percent, which was a limited tightening since the weighted average cost of funding had already risen to 14.36 percent.

But Agbal didn't stop there. In December, he increased interest rates 200 points more, moving the basic rate to 17 percent due to soaring inflation. "Erdogan didn't know anything about it. He saw it on TV," claimed the source close to the presidency.

A ruling AK Party insider said that a furious Erdogan telephoned Elvan, the economy minister, and told him that he was going to fire Agbal. "Elvan asked for more time to put the house in order. He convinced the president that Agbal would come to his senses," the source alleged.

As months passed by, the Turkish opposition increased its criticism of Albayrak's financial policies. The CHP, the main opposition, has been running campaigns, blaming Erdogan's son-in-law for burning through the central bank's more than $128bn reserves through public banks to hold the USD/lira rate steady since 2019.

"Where is this $128bn?" asked the CHP's leaders in an official petition that asked for a parliamentary inquiry in December.

As public pressure built up, Erdogan felt a need to defend his former economy minister in February. "Albayrak has signatures on everything from the discovery of gas resources in Black Sea to mining in this country," Erdogan said in a public address. "Berat has taken many steps of reforms in the finance sector. [CHP] officials are a bunch of conmen."

The president also expected a statement of support from Agbal, who never gave it, further undermining his relationship with Erdogan, multiple sources said.

The final blow for the president came as Agbal raised interest rates by 200 points last week, well above market expectations, giving Turkey the seventh-highest interest rate in the world.

The move was seen as a further step to restore the credibility of the central bank, as inflation was once again soaring. "The case for a hike was compelling. Inflation has risen 165bps [basis points] since the last rate hike on December 24," Tim Ash, a London-based investor, said at the time.

"Against that backdrop, inflationary expectations are rising again, and there is not much sign of a reversal in dollarisation, which is key to the central bank replenishing forex reserves, which are at mission-critical low levels."

Several reports point out that Turkey has around $190bn in short-term loans, mostly in the private sector, to be refinanced in the next 12 months, while the central bank's net reserves stand at around minus $47bn.

However, according to the people close to him, Erdogan perceived the most recent rate increase as a direct challenge to his authority. "He could tolerate a small hike. But this was like a middle finger," the source close to the presidency said.

In terms of economics, Erdogan had his own reasons. Further interest rate increases would slow down economic growth, push up already awful unemployment rates and create discontent among his core supporters.

Levent Yilmaz, an economist, said important business associations such as MUSIAD and TESK have also been troubled by the monetary tightening because it was an increasing burden for them.

'Erdogan could tolerate a small hike. But this was like a middle finger'

- Source close to the president

"The same groups initially released statements to support any financial move that would provide price stability," he said. "However, they felt a need to point out before the central bank's last meeting that high interest rates couldn't be maintained."

The leaders of the same business groups have been also meeting Erdogan and complaining about high rates, according to several Ankara sources.

The source close to the presidency said Kavcioglu's articles belonged to the past. "Everyone needs to see that the articles were written as an outside observer and they were all about the specific circumstances," the source said. "I don't expect an unhinged credit boom either. But the banks could help small and big business owners, exporters and others to get going."

Yilmaz, also a columnist for Yeni Safak, said the economic model that depends on hot money inflows that are looking for short-term high interest rates must come to an end, as they don't really help the high street. Ironically, some serious Turkish economists who are critical of Erdogan agree that high interest rates could put the country in a vicious cycle of further increases.

Economist Cetin Unsalan, in an article published after the central bank's hike last week, said that the strategy of high interest rates hadn't succeeded in convincing locals to sell more than $200bn that is sitting in  private banks.

Unsalan wasn't alone. Cuneyt Akman, a respected economist, also said the same week on Twitter that Turkey had been pouring its own resources into so-called investors.

Akman told MEE that even though he isn't against short-term and temporary rate hikes, there were two things that need to be addressed: inflation and financial independence.

"The government needs to stop increasing its budget deficit by providing lucrative contracts to its proponents," he said. "Cutting the budget deficit and ending the funding for mega projects that amount to $75bn would automatically decrease inflation and eventually remove the need for interest rate hikes."

Akman said the same money could be used for economic development instead of directly pumping it into construction and domestic consumption, which triggers high inflation and currency shocks.

He added that the Turkish private sector contracted a huge foreign debt between 2010-2017, which put companies in a never-ending circle of trying to find more loans to finance them. "Excessive foreign liquidity inflows should also be regulated and neutralised by the central bank. More hot money inflows also lead to more inflation," he said.

One thing everyone agrees on is that being at the helm of the Turkish economy is a hard job. One British news outlet joked this week that "the central bank hot seat" was even less secure than being Chelsea Football Club's manager, as Turkey now has its fourth governor in less than two years.

Maybe that's why Agbal thanked Erdogan after his firing. "I present my gratitude [to president Erdogan] for being sacked as of today," Agbal tweeted.