As the cost of living becomes an increasingly pressing issue, people have begun asking whether the government's accounting is adding up 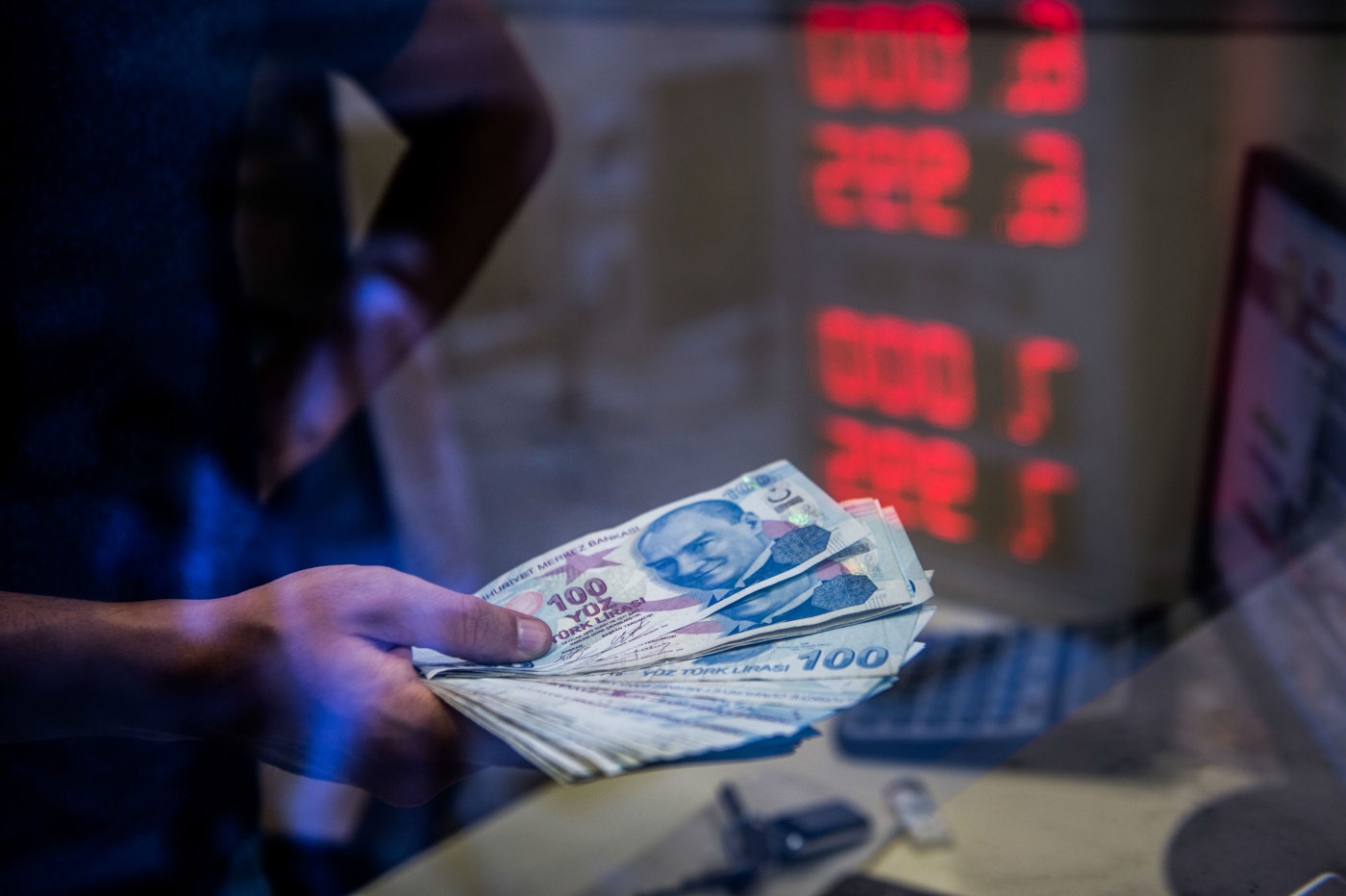 Sitting at his desk at Turkey’s largest circulating newspaper Sozcu, economy columnist Taylan Buyuksahin is waiting for the latest inflation and unemployment data to be released by the Turkish Statistics Institute (TUIK).

“We don’t trust the statistics they provide us. They are obviously not accurate. We do our own calculations," the 36-year-old Buyuksahin tells Middle East Eye.

"We take data from various sources such as workers unions, the Istanbul Chamber of Commerce etc, and calculate the inflation rate and unemployment rate on our own."

'We don’t trust the statistics they provide us. They are obviously not accurate. We do our own calculations'

A recent study released by the Istanbul-based Kadir Has University showed that economic problems have become the main priority for the Turkish public, while concerns over security-related issues have declined.

The study outlined that a year ago unemployment was the third-most important issue for people, standing at 17 percent, but this had now risen to the top at 27 percent.

Similarly, people who said that the high cost of living was their biggest concern increased from 13.2 percent to 17.8 percent.

Nearly 60 percent said the economy was getting worse and the number of people who found the government’s economic policies successful dropped a record 14.2 percent to 33.5 percent.

It was reported to be 10.56 percent for November, but Turkey's President Recep Tayyip Erdogan said last week that the country would again attain single-digit inflation and interest rates in 2020.

The inflation and unemployment rates announced by officials not only fail to convince many experts but have also created anger among the opposition and on the streets.

Istanbul MP Gursel Tekin, a veteran politician for the main opposition People's Republic Party (CHP), claimed that one in every three households in Istanbul is unable to pay their water and gas bills.

Tekin told MEE that more than a million households and businesses in Istanbul have had their water, electricity and gas cut due to unpaid bills. "How can the inflation rate be eight percent?” asks Gorkem, a student of international business at a private university in Istanbul.

“The taxes on almost everything increased. Food prices doubled. I live on my own and it is not winter yet but I almost pay double for heating and electricity compared to last year."

Gorkem, from the southeastern city of Gaziantep, says he and his family have been strong supporters of Erdogan.

"My father has a small production line for construction material. His main customers were Syrian. So for many years that trade stopped," he says.

"With all these taxes, increases in gas, electricity prices and the foreign currency crisis, my father would have gone bankrupt a long time ago if we hadn’t a certain wealth."

Gorkem says his family won't be voting for Erdogan again. "He has lost touch with reality living in his palace surrounded by his clowns," the 21-year-old says.

"I am not an economy professor like his son-in-law, but neither am I an idiot. The president should go to the markets and see for himself what the real inflation rate is.”

Like Gorkem, many on the street blame Berat Albayrak, Erdogan’s son-in-law - who became the minister of treasury and finance after the presidential elections in the summer of 2018 - for the recent economic hardships they face.

Domestic and international critics say Albayrak has not proved up to the job, and accuse him of failing to impress markets and the people with his lengthy PowerPoint presentations in a bid to restore confidence in the Turkish lira.

While Albayrak has tried to convince international investors, back home Erdogan has blamed the economic woes on foreign powers and lobbies, including the "Onion Lobby", after the price of fruits and vegetables skyrocketed.

Accusations of "creative accounting" have been levelled at the government as it attempts to sure up the economy.

In October, the deputy director of the TUIK was removed from his position for announcing the highest inflation rate in 15 years, a move which further hurt trust in the statistics agency.

"Their data doesn't reflect the reality. The prices on products they gave are unreal," says Ibrahim Kahveci, head of the economy division at the Turkish newspaper Karar.

"In 2017, tobacco products made up 5.48 percent of the bundle they use to calculate inflation," he adds.

"Despite the fact that taxes and the price of tobacco products increased radically, they dropped it to 4.79 percent in 2018 and this year to 3.87 percent, just to come up with a lower inflation rate.

'If everything is just fine as they claim, why all the price hikes?'

For Kahveci, the government is using non-essential items to estimate its inflation rates, giving a skewed picture.

"To come up with lower inflation rates, they don't take vital items such as electricity, gas and bread into consideration, but add baby food to the basket," he said.

“If everything is just fine as they claim, why all the price hikes?” asks Gorkem.

Other than the price hikes, new taxes have been introduced recently including ones on accommodation, property and digital services.

In addition, in order to collect more revenues, the government purchased an algorithm that tracks down citizens who owe money to the state.

After employing the system, millions of people's and many companies' accounts were frozen in November.

As a result, many Turkish citizens started to cash out their bank accounts and have begun to use alternative methods to transfer money domestically and internationally.

Last month, a column by Dilek Gungor in the Daily Sabah newspaper, reported that there were rumours the government was to pass a law that would send economists, journalists and ordinary citizens who give “fake, wrong or misleading information” about the economy, national currency, financial data, foreign exchange etc to jail for up to six years.

Speaking to MEE, Gungor called the foreign exchange crisis of last summer "an attack on the Turkish lira" and argued that "manipulating social media posts that claimed that the dollar will go up to eight to 10 liras pushed the people towards the dollar".

"This didn't materialise. People who trusted them lost money," she said.

"In the stock market there are regulations that prevent manipulation, but for the general economy, there are none. I know there are preparations on this.

"If you ask me, this is necessary and should have been done earlier. This doesn’t mean criticism should be banned or that people who note that ‘budget deficit unemployment increased’ will be punished. "If these preparations will become a law, price and value manipulators will be fined."

“The TUIK is an institution that produces data on international standards. Its credibility shouldn’t be harmed by politics and ideology. This will benefit no one.”

Meanwhile, two Bloomberg reporters are currently being tried in Turkey for a news story they published in August 2018 reporting about the effects of the sharp decline in the Turkish lira and how the authorities and banks responded.

The two men are accused of trying to undermine Turkey's economic stability by writing the article, for which the prosecution is seeking a jail sentence of between two and five years.

In addition, 36 individuals are being tried for their social media comments on the story or comments critical of Turkey's economy at that time.

According to a report published last week, Turkey is the second-highest jailer of journalists in the world.

Economist Mustafa Sonmez was also taken into custody for his social media posts back in April.

Another economist, Evren Deniz Zelyut, who has a YouTube channel with over 100,000 subscribers where he shares his insights and opinions on the Turkish economy, was detained early this month by an anti-terror squad.

“They don’t like that I am telling the truth, and the fact that I have such a big audience, but I will continue,” he told MEE shortly after he was released.

"I have two TV programmes. My 76-year-old mother calls me before every show and warns me that I should be careful," says Kahveci.

"Recently Mr Albayrak told the press that $10bn of foreign investment came into the country.

"I checked all sources to verify this. There is none. Where is this money? So, if I report on this, is it a crime?"

'Many who quoted this data when inflation was rising didn't question it for a second, but now, when it's falling, are suddenly bothered by it'

Taha Meli Arvas, an economist and columnist for the pro-government English language Daily Sabah, rejects criticism of the government's figures.

"Many countries have complained about these EU standardised data, not just Turkey.

"The Central Bank of Turkey reports two million data points of data monthly, and they make it readily available for all to inspect.

"Some media report anecdotal evidence of higher prices, but I've yet to see one academic study, foreign or Turkish, proving the bank's data was incorrect.

"It would be very easy to impeach the data if it were false. Many who quoted this data when inflation was rising didn't question it for a second, but now, when it's falling, are suddenly bothered by it."

“If your economy is vulnerable, whatever restrictions you put on reporting, you won’t be able to stop rumours," the former State Minister of Economy Ufuk Soylemez told MEE.

"In a democratic country, no one would call a journalist reporting on the economy a terrorist and try to jail them for treason.

"This is an example of panic and incompetency. They are not sharing the real financial data with us. They are putting their heads in the sand."

For Soylemez, the official Turkish inflation rate is "ridiculous".

"The inflation people experience is above 20 percent," he says. "How can an economy be good where there is double-digit unemployment? They are making fun of the people.”

*Relevant ministries and institutions were asked for comment but did not respond.