Turkish security officials detained 20 foreign nationals on suspicion of affiliation with the Islamic State (IS) group in dawn raids in Ankara on Monday, Middle East Eye has learned.

Multiple Turkish officials, who spoke on condition of anonymity, told MEE that the National Intelligence Organisation (MIT) detected that the suspects had illegally entered Turkey.

Upon receiving the information, Turkish police raided multiple addresses in the capital Ankara to take them into custody.

One Turkish security source confirmed that the foreign nationals were Syrian citizens.

Police sources said the suspects would be transferred to the immigration office, which is likely to deport them back to Syria. 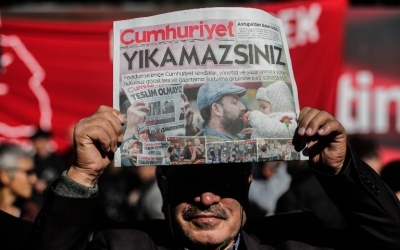 The raid came in the wake of IS leader Abu Bakr al-Baghdadi’s killing by US forces in Idlib, Syria, on Saturday night.

The officials declined to provide more information about the timing of the operation.

“There are around 1200 individuals detained and convicted due to their connection to [IS]. More than half of them are from 40 different countries,” he tweeted.

Altun said Baghdadi’s movements within Syria, and eventually to Idlib from Northeastern Syria, should be investigated and those who are responsible for helping his travel must be brought to justice.