Since the 15 July attempted coup, the Turkish lira has witnessed a steady decline in value against the dollar Will it ever end? Turks have over the past three months nervously watched the steady decline in value of the Turkish lira against the dollar, seeing it haemorrhage more than 10 percent in the past month alone.

The central bank last week stepped in with an unexpected hike of 50 basis points in its leading rate, but economists doubt whether even tighter monetary policy will be enough to halt the currency's decline.

"The more the dollar increases, the less we do business here," complained Mehmet Semih Ozdemir, looking for customers at his clothes stall at the Istanbul bazaar.

"Some days we have no client. Others just a few. It's hard to make ends meet," he said.

The currency has been buffeted by fears over Turkey's economic performance, with growth expected to have slowed in the third quarter this year and the high current account deficit a persistent risk factor.

But there are also political concerns in the wake of the 15 July failed coup, with investors fretting over the magnitude of a subsequent crackdown, fraying relations with the European Union and the consequences of President Recep Tayyip Erdogan's dash for a presidential system.

Completing a perfect storm, the international context is also stacked against the lira, with the dollar surging on the prospect of higher US interest rates and protectionism after the election of Donald Trump.

In a sign of the tough ride ahead, the rate rise gave the currency only brief support, which was hours later wiped out as the European Parliament voted to back a freeze in EU membership talks with Turkey.

"Against a widening current account deficit, despite slow growth and heightened political risks, the level of short-term rates is still too low to provide adequate cover for the Turkish lira," said Inan Demir of Nomura International.

He predicted that the unit, currently trading at 3.4 to the dollar - compared with 2.9 at the start of the year - would depreciate further to 3.65 in the next 12 months.

Seeking to reassure investors in a speech on Saturday, Prime Minister Binali Yildirim said Turkey had a "sound economy" and the current turbulence was a worldwide problem.

Economists are also frustrated that the government of Erdogan has lost the reforming zeal that impressed the West in its first years in office.

"Even if the authorities can be pragmatic, the signals sent in terms of economic policy are not good and reforms that were announced years ago are in limbo," said Sylvain Bellefontaine, Turkey economist at BNP Paribas.

To implement its rate hike, the central bank had to openly defy Erdogan, who had called for lower rates, saying: "Okay let it (the central bank) be independent, but I am a politician."

Erdogan's resilient popularity has been built on his success in bringing Turkey out of its 2000-2001 financial crisis into a spectacular economic revival based on a booming domestic manufacturing sector.

Turkey enjoyed a stellar economic performance after the ruling Justice and Development Party (AKP) came to power in 2002, peaking at growth of more than nine percent in 2003 and more than eight percent in 2004.

But Selin Sayek Boke, spokeswoman for the main opposition Republican People's Party (CHP) and a former economics professor in the US, said now "the Turkish economy is on the verge of a crisis".

She told AFP such a crisis risked being different to any other in the past as it was beginning in the real economy and could then spread to the finance sector.

"The cause is absolutely political. Turkey's biggest economic risk is from the political risk created by the AKP."

In a worrying sign, Turkey's usually profitable national airline and biggest exporter Turkish Airlines made a $463 million loss in the first nine months.

It also has reportedly parked 30 airliners unused at Turkish airports due to lack of demand in the winter season.

For this year, the government has slashed its growth forecast to 3.2 percent from 4.5 percent but even this is seen by some analysts as optimistic. The current market consensus forecast for Turkish growth is 3.0 percent for both this year and next, according to data provider Factset.

Prominent Turkish economist Mustafa Sonmez said a declining economy "risks causing splits within the AKP" between those favouring expansionary policies to boost growth and those who want a more fiscally conservative line. 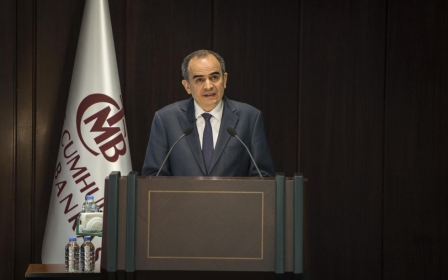