About 51.2 percent vote in favour of constitutional amendments that will vastly expand presidential powers Turkey on Sunday narrowly endorsed a proposal to grant the president vastly expanded powers and to shift away from a parliamentary system, with the main opposition party claiming violations in the vote count and contesting the unofficial results.

With more than 50 million eligible voters, 51.2 percent voted in favour of the move, according to data provided by state-run Anadolu news agency, a decision that could potentially mark a significant turning point for the country.

"Our nation acted in maturity and went to the polls today," said Turkish President Recep Tayyip Erdogan. "I thank everyone who voted regardless of the colour of their vote." "This is a historic decision where people voted for their future. This administrative reform might just be 18 articles but its contents mean it is deep-rooted," added Erdogan.

He called Prime Minister Binali Yildirim and Devlet Bahceli, leader of the Nationalist Movement Party (MHP) to congratulate them following the results.

LIVE: Turkey votes on whether to expand president's powers
Read More »
In a victory speech from his ruling Justice and Development Party (AKP) headquarters, Yildirim, who is set to see his position abolished, addressed the party faithful: "In our democratic history we have opened a new page with this vote. Thank you Turkey, thank you my dear nation. A special thanks and greetings to our founding chairman and leader Mr Recep Tayyip Erdogan.”

“This election showed the entire world the maturity of Turkish democracy. This referendum has no loser, the winner is Turkey. It is time to be united.”

Bahceli in a statement called the result “an important success”.

Turnout was high with a reported 85.8 percent exercising their right to cast a vote. The turnout was lower in the southeast, in the 70-75 percent range.

In response, Bulent Tezcan from the Republican People’s Party (CHP) who was opposed to the switch, told Turkish broadcaster CNN Turk: “Everyone is showing vote count data from (state-run] Anadolu news agency. Our data shows the No count to be ahead in various places, a lot more than Anadolu reported. Opening the ballot boxes and counting the votes are a different matter.”

Erdal Aksunger of the CHP also claimed irregularities in the vote count and said they would contest the result from 37 percent of ballot boxes.

“The judges of the election are engaged in fraud. I call on everyone not to abandon their stations and keep a watchful eye,” he said in live comments on CNN Turk.

This is the first time that only Anadolu has released voting results. In the past, the Cihan News Agency also released results.

Cihan was shut down for being part of Fethullah Gulen’s media empire. Gulen, a US-based preacher, is accused of being the orchestrator of a failed coup attempt last 15 July.

Late on Sunday, the head of the election commission said that the "Yes" camp, backing greater powers for Erdogan, had won the referendum.

"According to the results, it is the Yes that has emerged" victorious, said Supreme Election Board (YSK) chief Sadi Guven, adding that final results would be issued in the next 11 days.

The ruling party and its supporters had began celebrating even before official results came in.

All eyes will now be focused on how Erdogan will utilise his new powers, and whether he will opt for a less confrontational approach with those who don’t share his views.

How he chooses to approach relations with European countries will also be closely watched.

Early indicators are that there will be little let-up in his targeting of opponents.

During a Saturday speech at a campaign rally, Erdogan said while he would display understanding towards those who vote no, he would not place yes and no voters “in the same category”.

The switch is slated to take effect in 2019, but hints have emerged that the date will be moved forward.

Some believe he will embark on a path of trying to completely crush political and ideological opponents, while others say he may be less aggressive after consolidating his power.

The decision today marks the first time in the history of modern Turkey that so much power has been vested in one office and in one man’s hands.

Erdogan, who has been in office since 2003 – first as prime minister and then as president – has developed a cult following among his supporters on a scale that almost rivals modern Turkey’s legendary founder, Mustafa Kemal Ataturk.

Central Anatolian and Black Sea provinces, which have become strongholds of the ruling AKP, voted overwhelmingly in favour of switching to an executive presidency, with most provinces endorsing the shift by 70 percent or more.

While that was expected, it was the country’s most populous city, Istanbul, that kept the result in doubt until the very end as it rejected the proposal by 51.1 percent.

Among the major urban centres of Istanbul, Ankara and Izmir – significant because they have the highest population density and voter numbers in the country – Istanbul was considered the pivotal battleground for this referendum.

The relatively liberal western port city of Izmir, a secular stronghold where the CHP performs well, voted 68.7 percent against the amendments package.

In the capital Ankara, a town mostly comprised of civil servants and migrants from central Anatolian provinces, opponents of the shift edged ahead with 51.1 percent.

Istanbul, with about 10 to 11 million eligible voters, was always going to be where the outcome would be decided.

Istanbul’s sprawling and expanding suburbs have generally been pro-AKP, as the city keeps drawing migrants from the country’s other provinces looking for jobs and economic advancement.

Other parts of the city are more liberal and tend to vote for social democrats and left-leaning parties and causes. The city’s significant Kurdish population, said to be the largest in the world outside traditionally Kurdish -majority regions, although no exact numbers are available, also has a history of favouring pro-Kurdish rights parties and causes.

Results from central Anatolian provinces show that the "Yes" camp won convincingly, in spite of an active campaign against the proposal by dissidents from the MHP, which is also strong there. The strong performance in Central Anatolia and the Black Sea provinces helped push the proposal over the 50 percent plus one vote required on the national level.

In Yozgat, the "Yes" camp won by more than 74 percent and in Cankiri it registered 73.4 percent.

As results trickled in, it became clear that although the AKP alliance with the MHP appeared to have dealt a blow to Erdogan and the AKP’s chances in the majority Kurdish-populated southeast and eastern parts of the country, it wasn’t enough to derail their bid.

Turkey’s Kurds are estimated to comprise 15 to 20 percent of its 80 million population.

The campaigning process in the run-up to the referendum was marked by attrition and bitterness, with the pro-government side in particular calling opponents traitors and terrorists.

The result is also likely to be questioned, given the campaigning process that was often slammed as unfair. Opponents of the package received almost no TV time, while almost all national and local broadcasters – both state and private – televised every campaign speech in favour of the switch to an executive presidency by the prime minister or president, usually live.

The official results will be announced by the YSK, which oversees elections and referendums, after it processes any complaints.

There is no previous record of the outcome of any election or referendum changing after such a review.

A monitoring team from the Organisation of Security and Co-operation in Europe was also present during the referendum.

Next on the agenda is whether the timetable of switching to the executive presidency in 2019 will be adhered to and who will wield ultimate executive power until then, when the position of prime minister will be abolished.

Any doubts about the legitimacy of the shift, given the narrow vote, were rubbished by Mehmet Ucum, chief adviser to Erdogan, who played a big part in drafting this amendments pacakage.

In late March, Ucum told a group of international media outlets, including Middle East Eye, that legitimacy was not going to be an issue even if the “winning margin was 50 percent plus 1 vote”, because that is the established criteria.

Internationally, how Turkey plots its course in the Syrian theatre will be among the first issues to come into the spotlight. Erdogan will now be able to make foreign policy decisions more swiftly without the “obstacles” he railed against within the previous system.

Turkey’s future relations with European states and the European Union will also be closely watched. Turkey’s strained ties with some EU member states took a turn for the worse during the referendum campaign. Ties soured with the Netherlands and Germany especially, as those countries and some others refused to permit Turkish government ministers to campaign in their countries.

Erdogan has not dropped his insistence on backing public calls for the reinstatement of the death penalty, saying he is happy to hold a referendum on it if needed. He repeated those calls on Sunday. The move would end Turkey’s almost 60-year journey of trying to join the EU. 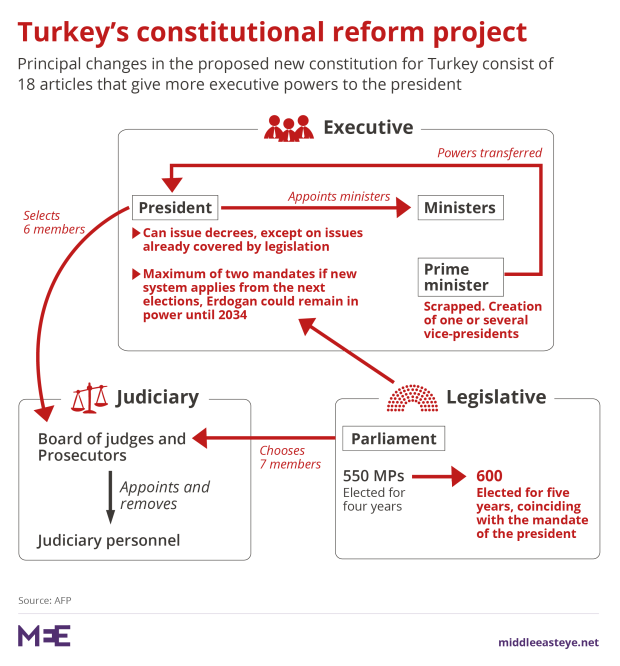 Erdogan has even suggested holding a referendum on whether Turkey should continue its accession talks with the EU.

But despite all the political differences Turkey and the EU have, the economic relationship between the two is significant and vital for both.

It remains to be seen if Ankara will seek to reconcile or continue to confront the EU states with which it has recently fallen out.