David Hearst
Is Turkey following the path Russia took in weakening parliament and strengthening the presidency? 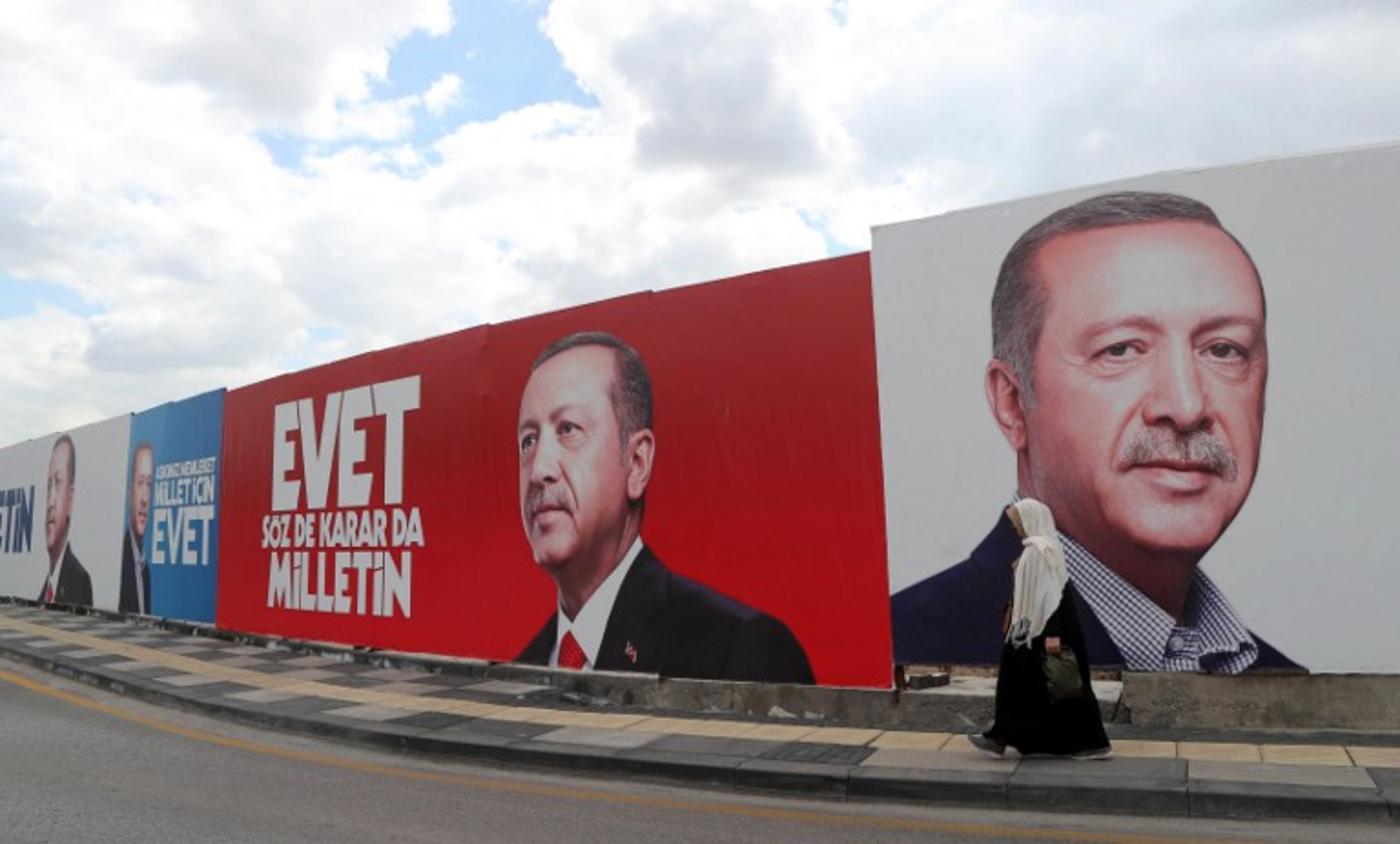 At what point in the last 15 years of power did Recep Tayyip Erdogan decide that he alone held his country’s destiny in his hands? When did he start comparing himself with Ataturk and pull up the drawbridge?

Logic dictates that it was on that dramatic midsummer night last July, when his life and those of his family hung by a thread. Logic dictates it was the shock of seeing 249 people killed, parliament bombed, cars crushed by tanks. More Turks fell on that one night than Islamic State had killed in two years. Logic dictates that this was the moment when Erdogan decided he must rule with an iron hand.

Constitutional change is not a tailor-made suit. Its not meant to be designed for one party, let alone one man

No other element in the periodic table describes the scale of the purges that have taken place since then: over 97,000 public servants dismissed and a further 37,000 suspended; legal action started against 103,000 people of whom 41,000 are remanded in custody; 1,094 trials opened; 158 media outlets closed, including 60 television and radio stations, 19 newspapers, 29 publishing houses and five press agencies; more than 150 journalists arrested; 10,000 members of the media have lost their jobs and thousands are awaiting trial for tweets or other social media posts.

Neither those figures, nor the collapse of the ceasefire with the PKK, nor the war in Syria, nor the need to turn to nationalists for support, tell the whole story of the journey Erdogan has travelled.

The turning of a man who began life as an avowed democrat who espoused pluralism, peace talks with the PKK, rule of law and parliament into a leader who walks and talks like a Turkish nationalist drawing his power and inspiration from populist acclaim alone, had other antecedents.

The last man who stood up to Erdogan was his former prime minister, Ahmet Davutoglu, and the break up of that relationship dates from February 2015, when the prime minister attempted to pass a transparency bill which required everyone in authority to declare their assets. That September, the two had a massive behind-the-scenes row at a party congress over the composition of the AKP’s central executive committee. The row was so heated that for 12 hours Davutoglu resigned.

Hostility continued over the formation of the government after the November election, when Erdogan, the constitutionally weaker man, forced two candidates into the cabinet against the prime minister’s wishes. Davutoglu left the four-hour meeting determined to take the full 45 days allotted to him to announce the cabinet, but woke up the next day to find a Russian fighter jet had been shot down. The jet was shot down at 6am, and the government announced at 11am. Erdogan had had his way again.

Apart from a speech Davutoglu made in Diyarbakir when he said the Kurdish question could not be solved by military means alone (within a day, Erdogan vowed to eliminate every terrorist in the country), their dispute was not about policy. They agreed on, and Erdogan was aware of, the details of the refugee deal with Brussels and the lifting of the visa requirement for Turkish citizens.

Of course, the EU has failed to live up to its promises on both (Turkey has neither received the money promised by Brussels nor visa free travel) and this is now being blamed on the deal itself. But this was not what angered Erdogan at the time. He was not upset by the deal itself, but by Davutoglu signing it. Erdogan thought his prime minister was stealing his limelight. Erdogan got angrier still when Washington invited Davutoglu for a visit in May. Erdogan wanted the world to know his was the only telephone number in Turkey to call.

They fell out at different times and for different reasons - the Gezi Park protests, when many in the AKP first witnessed Erdogan’s authoritarian tendencies; the signing of a petition by academics protesting the government’s actions in the Kurdish southeast; the failure to get Erdogan’s backing for a party post. But they are united by their thinly veiled scepticism at Erdogan’s intentions.

This all comes to a head on Sunday, when the country votes on a series of constitutional amendments to turn a parliamentary democracy into an executive presidency.

Erdogan himself has made little secret of what he thinks is at stake on Sunday, although if he was behaving constitutionally - in other words by the existing constitution - he should not be campaigning at all.

Erdogan accused those who plan to vote No of siding with the failed 15 July coup plot blamed by him on the US-based preacher Fethullah Gulen: “To be honest those who say No are on the side of July 15," he said in a speech this week. "Who are the ones saying No? Those who want to break up the country. Those who are opposed to our flag."

Prime Minister Binali Yildirim meanwhile has said a No vote is what is wanted by the Kurdistan Workers Party (PKK) and the Gulen group, which Ankara terms the Fethullah Terror Organisation (FETO). "The terrorist groups are campaigning in chorus for the 'no' vote," he said. "My citizens are not going to stand alongside terrorist groups."

But it could be more than just Gulen and the PKK who oppose this move.

Gul himself said: “We have experienced a Turkish-style parliamentary system and seen its problems. There shouldn’t be a Turkish-style presidency. If there is to be a presidential system, then just like in the US where the separation of powers is clearly written down and everything is well defined… if it is based on the supremacy of law like in mature democracies, then no doubt it is also a democratic system.”

Gul’s implication is clear. He fears this presidency will not be based on a clear separation of powers and pointedly refused to attend two party meetings with Erdogan and Yildirim.

'No' across the spectrum

The yes/no fault line is not a religious one. There are Islamists to the conservative religious right of Erdogan who oppose the amendments. Turkey’s oldest Islamic movement, Milli Gorus (National View), which was started by Erdogan’s former mentor Necmettin Erbakan, and is represented today by the Saadet (Felicity) Party, will vote no to the constitutional changes.

Would Erdogan himself accept a situation where an opposition leader-turned-president wields the same power over him? Plainly he would not

“You do not need to call it a dictatorship. But if only what one man says goes then it will be a regime of authoritarian diktats. Even the Prophet consulted with his companions and changed his opinion when needed," said party president Temel Karamollaoglu.

Nor are there divisions within the AKP camp alone. There is a dissident faction within the Nationalist Movement Party (MHP) headed by Meral Aksener, who became Turkey’s first female interior minister, who accuses the party leader Devlet Bahceli of betrayal and is vociferously in the No camp.

Like most of her colleagues in the No camp, she has experienced an unexpected number of technical problems, curious happenings like power cuts at her speeches, attacks on her rallies by mobs, and bans by provincial governors.

The campaign itself has been anything but a level playing field. As the Organisation for Security and Cooperation in Europe said: “The Yes campaign is led by the governing AKP and to some extent the MHP. It is manifestly supported by several leading national and lower level public officials, including the prime minister, several other ministers, and the president, who under the constitution is required to remain non-partisan and perform his duties without bias.

“No supporters have faced police interventions while campaigning; a number were also arrested on charges of insulting the president or organising unlawful public events. In Sirnak and Van provinces, the HDP’s campaign song, in the Kurdish language, was banned by authorities on the grounds it violated principles of integrity of state and Turkish as the official language. Violent scuffles have also been reported at several No campaign events.”

As to the changes themselves, you can cut through most of the claims and counterclaims by asking two simple questions: if indeed there is nothing special about the powers the president is about to acquire, if they are equivalent to those other presidents around the world wield, would Erdogan himself accept a situation where an opposition leader-turned-president wields the same power over him? Plainly he would not.

As an opposition leader, would he not then be looking around for the lost checks and balances of a parliamentary system? Plainly, he would.

Constitutional change is not a tailor-made suit. Its not meant to be designed for one party, let alone one man. The inescapable conclusion from Erdogan’s own behaviour is that it is. Turkey’s weak, personality- driven institutions are about to get a lot weaker.

There is, of course, a huge irony in the event that is about to take place. As New Year’s greeting, the prime minister's director general of press, Mehmet Akarca, sent cards with a piece of marble that fell from the wall of the Grand National Assembly after it had been bombed by F16 pilots led by the coup plotters, glued to it. “On 15 July 2016, the people of Turkey defended democracy at the cost of their lives," the card said.

Indeed they did, and as I wrote at the time, they came from all parties, all parts of the armed forces, to defend parliament, the symbol of their hard-won struggle against the military and the deep state. It is exactly this institution, this symbol that is being weakened now.

Will a stronger Turkey emerge as a result? Ask Russia which did the same thing in 1993 under Boris Yeltsin. He got 10 tanks to fire shells into the White House, the seat of the old Soviet parliament.

The Western press were all in favour of the crushing of what they regarded as a dissident voice and a Soviet hangover. The Economist called the bloodshed on that Sunday a “ necessary evil”. They got a presidential system slightly more authoritarian than Yeltsin himself bargained for. They got Vladimir Putin.

Photo: A woman walks past a giant poster bearing portraits of Turkish President Recep Tayyip Erdogan on 11 April 2017 in Ankara, ahead of the referendum on whether to change the current parliamentary system into an executive presidency (AFP). 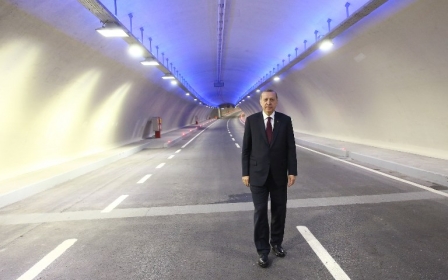 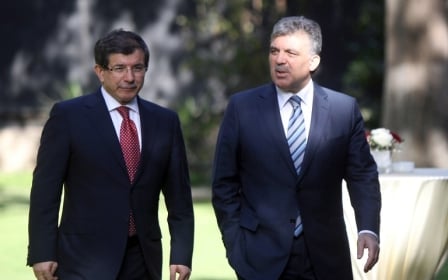 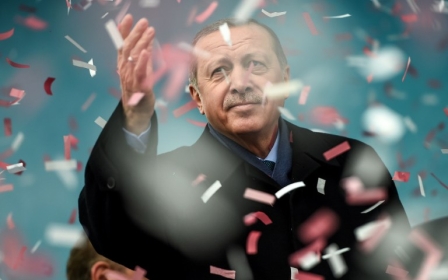