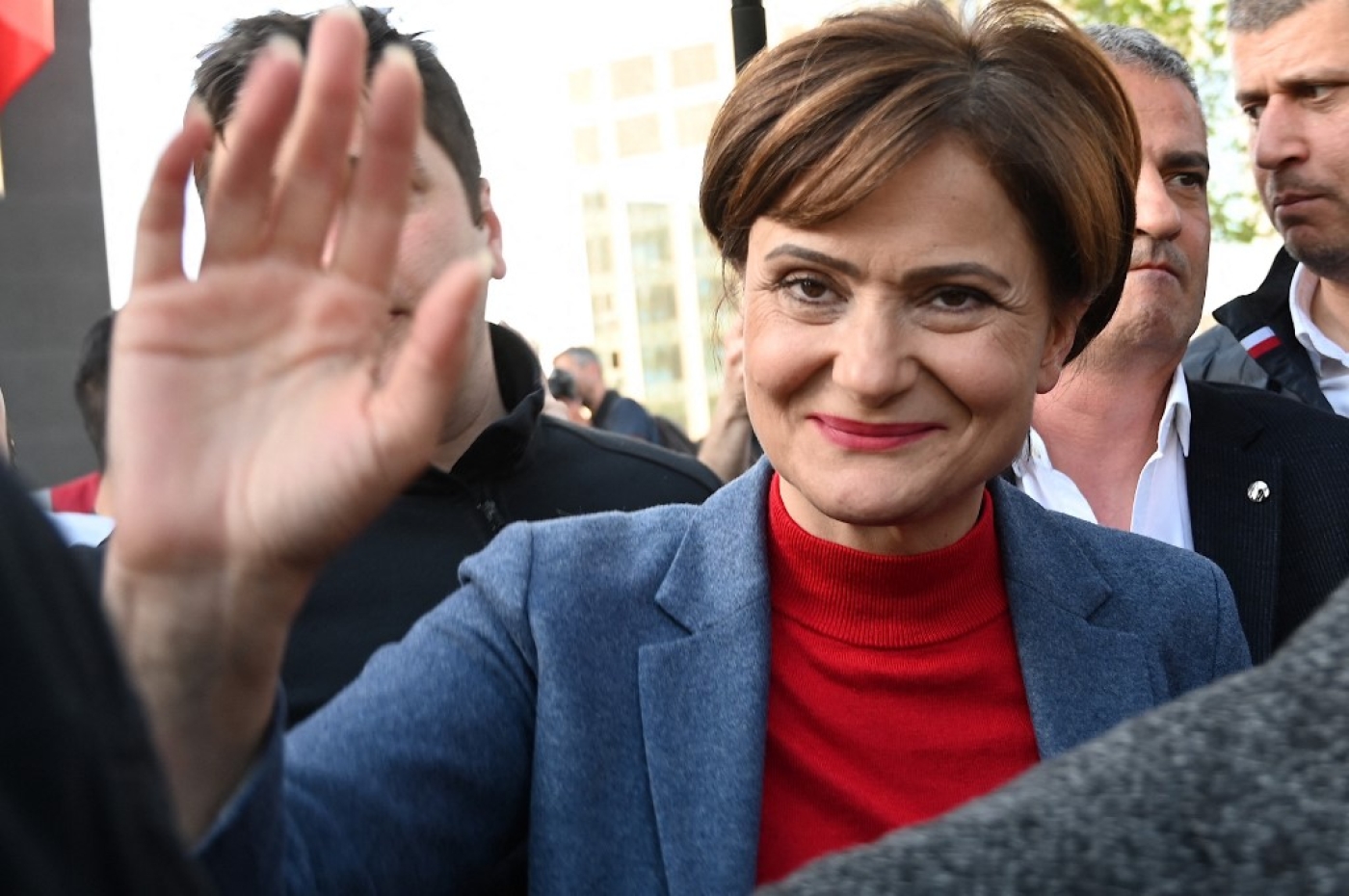 Canan Kaftancioglu arrives at CHP headquarters in Istanbul, on 12 May 2022, after Turkey's supreme court of appeals upheld her prison sentence (AFP)
By
MEE and agencies

A senior member of Turkey's main opposition party was freed on Tuesday on the same day she had been jailed following a conviction for insulting President Recep Tayyip Erdogan and other public officials.

The sentence against Canan Kaftancioglu, who leads the Republican People's Party (CHP) in Istanbul, also banned her from running in next year's legislative and presidential elections.

On 12 May, the supreme court of appeals confirmed Kaftancioglu's conviction on three counts, including over an anti-Erdogan tweet. Although her sentence had been for four years, 11 months and 20 days, party officials had earlier told AFP she could be freed at any time, as can happen for sentences shorter than five years.

In 2019, Kaftancioglu was sentenced to nearly 10 years in jail on a range of charges including "terrorist propaganda" and insulting Erdogan.

The charges related mostly to tweets Kaftancioglu posted between 2012 and 2017. She had been free pending the appeals.

Among the tweets used by the prosecution against Kaftancioglu was one in which she criticised the death of a 14-year-old boy hit by a tear gas grenade during the mass "Gezi Park" protests of 2013.

Tens of thousands of people rallied in Istanbul earlier this month to express their support after the court handed down its sentence.

Kaftancioglu, a doctor by profession, played a key role in the surprise victory of the CHP's Istanbul mayoral candidate Ekrem Imamoglu in 2019 - the first time Erdogan's party had lost power in Turkey's biggest city in 25 years.

Kaftancioglu "is my comrade with whom we are striving together to change Istanbul", Imamoglu stated on Twitter. "I find this decision political and condemn it. I stand by our chairwoman.”

Imamoglu himself will appear in court on Wednesday on charges of insulting public officials. If convicted, he faces up to four years in jail.

Imamoglu is charged with insulting a public official in a speech he made about a repeat of the 2019 mayoral election. Imamoglu narrowly won that election over his AK Party rival and, after those results were annulled, won the rerun of the vote by a comfortable margin.

In his speech, Imamoglu said: "Those who annulled the elections on 31 March are fools."

The Istanbul municipality's press office said he had been responding to Interior Minister Suleyman Soylu, who it said had referred to Imamoglu as a fool. It said Imamoglu was not criticising the High Electoral Board (YSK) but the politicians who caused the vote to be annulled.

Political opponents of Erdogan have accused his administration of putting pressure on the opposition ahead of next year's presidential elections.

Rights groups regularly accuse Erdogan of using the judiciary as a political tool, particularly after thousands of judges were purged in the wake of an attempted coup in 2016.

"Erdogan doubles down on suppression as (he) loses ground amid growing economic pressure in the country," Seren Selvin Korkmaz, of the Istanbul-based IstanPol Institute, commented on Twitter earlier this month.

"#Kaftancioglu is a rising figure within the #CHP and frequent government target ... The (ruling AKP Party) tries to take revenge for losing Istanbul by sending her to prison.”

The latest ruling comes on the heels of a life sentence handed by an Istanbul court to another Erdogan critic and activist, Osman Kavala, last month.

A leading figure in Turkey’s civil society, the 64-year-old Kavala was accused of attempting to topple Erdogan's government by financing the 2013 protests.