Restrictions on travel to Turkey, a popular destination for British tourists, remain in place despite lower reported rates of infection than Spain, Cyprus and Greece Turkish beach resorts such as Oludeniz, pictured here in May 2021, are popular with British tourists (Reuters)
By
Ragip Soylu
, Ian Cobain
in
Istanbul

The Turkish government expects the British government to remove Turkey from its travel "red list" and place it in a better category based on data showing a sharp drop in Covid-19 cases in recent months and a situation that is "under control", a Turkish diplomatic source told Middle East Eye on Monday.

The UK Department of Transport's traffic-light system regulates entry into the UK via English ports and airports, with countries on the red list subject to the tightest restrictions.

'The pandemic in our country has been under control with measures and a rapidly progressing vaccination campaign. And a stable drop in Covid cases has been ensured'

Last week, the UK kept Turkey on its red list, despite low reported rates of new infections and deaths in Turkey in comparison with some other countries on the amber list.

The move frustrated Turkish businesses and officials who expected a positive change in the status that would allow British holidaymakers to return to the country's resorts. Turkey is a major destination for British tourists, with 2.5 million people visiting from the UK in 2019.

UK government ministers decide which countries should be categorised as green, amber or red after receiving risk assessments from a body called the Joint Biosecurity Centre.

Arrival from a red-list country requires a Covid-19 test and hotel quarantine at the traveller's own expense.

According to data compiled by Reuters, Turkey has seen the daily rate of new infections fall from more than 60,000 to fewer than 5,000 at the start of July. Daily rates have been increasing for the past 10 days however.

Still Turkey last week had a daily rate of infection per 100,000 people of 48, compared with a current figure of 467 in the UK - almost 10 times higher. According to Turkey's own figures, almost two-thirds of adults have had at least one vaccine dose.

Turkey's figures also appear to compare favourably with other popular holiday destinations from the UK such as Spain, Cyprus and Greece, which are all amber-listed. Neighbouring Iran is also on the amber list, despite higher rates of infection and lower rates of vaccination. 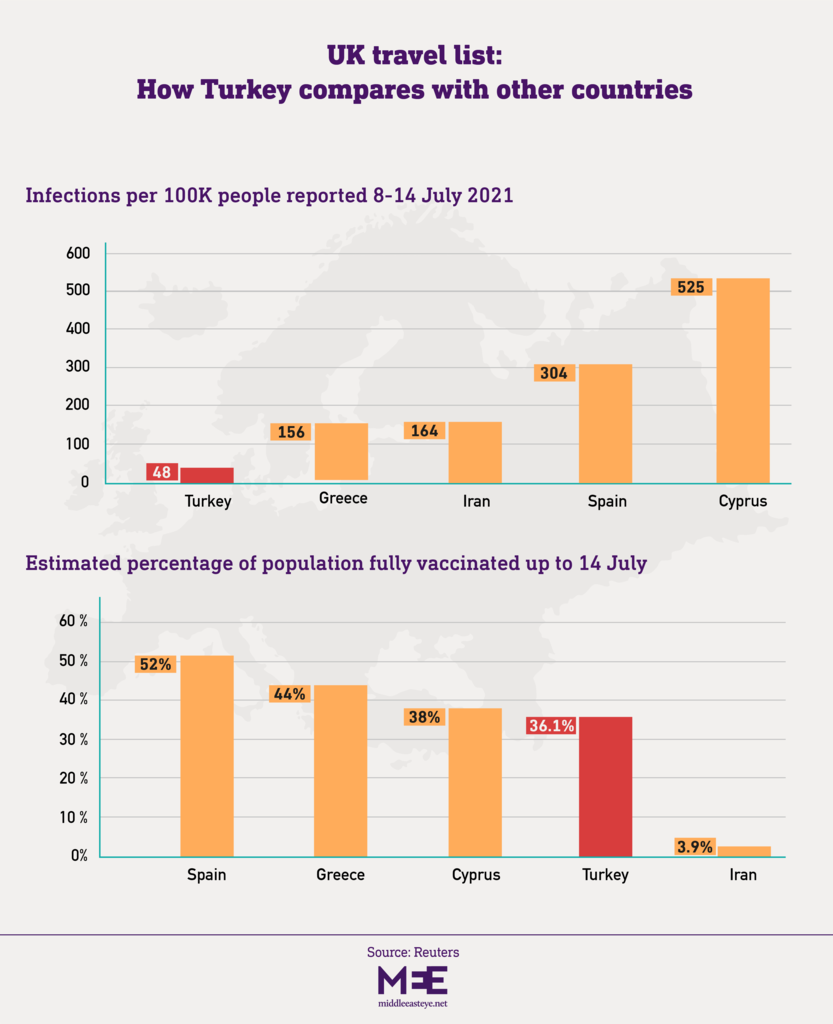 “The pandemic in our country has been under control with measures and a rapidly progressing vaccination campaign. And a stable drop in Covid cases has been ensured,” the Turkish diplomatic source said.

“Thus, a number of countries that include France, Germany, Spain, the Netherlands and Denmark positively updated their risk assessment towards Turkey and reciprocal travel has begun.”

The source said the Turkish government’s belief is that the UK, where the Delta variant constitutes a majority of cases, does not want to remove countries from the red list out of principle and utmost caution.

“We maintain our dialogue to make the UK [carry out] a new risk assessment that is positive to Turkey,” the source added.

The Department for Transport told MEE it would not comment on the listing of specific countries. It does say however that the scientists advising it consider vaccination rates in each country, the presence of variants of concern and the quality of the data they are receiving.

A spokesperson said: “Our international travel policy is guided by one overwhelming priority - public health - and traffic light allocations are based on a range of factors, including genomic surveillance capability, transmission risk and variants of concern.”

'Turkey’s Covid infection data is released daily in accordance with the World Health Organisation standards. They are all transparent and updated regularly'

MEE also contacted the Scottish government to ask whether it had taken concerns about Turkey's data into consideration in keeping the country on its own version of the red list.

A spokesperson referred MEE to a statement issued by the Scottish government last October which said: "Travellers from Turkey will also be required to be quarantined as it is clear that case numbers in Turkey have been under-reported."

A Turkish health ministry official, speaking to MEE, expressed disbelief that the reliability of Turkish data had been brought into question.

“It is really astonishing,” the official said. “Turkey’s Covid infection data is released daily in accordance with the World Health Organisation (WHO) standards. They are all transparent and updated regularly.”

Last year, after being accused of only reporting hospitalised Covid infections, Turkey's health ministry updated its daily data to include reported asymptomatic cases.

Engin Sertoglu, the head of the Turkish travel agents association in the UK, told MEE that Turkey’s national carrier, Turkish Airlines, and Istanbul airport, which is a major transit hub between Europe, Asia and Africa, are the chief reasons that Turkey remains on the list.

'Turkish Airlines connect Europe to Asia and Africa, making Istanbul a huge hub that could transmit the Delta variant as well'

He pointed out that Qatar and the United Arab Emirates, which are also home to major global airways and busy airports, also remain on the UK's red list.

“Turkish Airlines connect Europe to Asia and Africa, making Istanbul a huge hub that could transmit the Delta variant as well,” he said.

“The UK, in my opinion, still holds Qatar and the UAE on the red list, because both of them have similar national carriers, Qatar Airways and Emirates, that similarly make those connection flights.”

The UK lists Spain, France and the Netherlands on the amber list, although the three are aviation hubs for flights from the Far East, Brazil and South Africa. 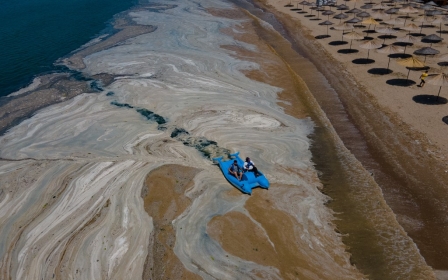 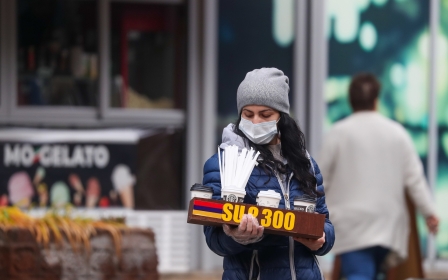