Turkey's HDP delegation to march to Cizre district despite curfew 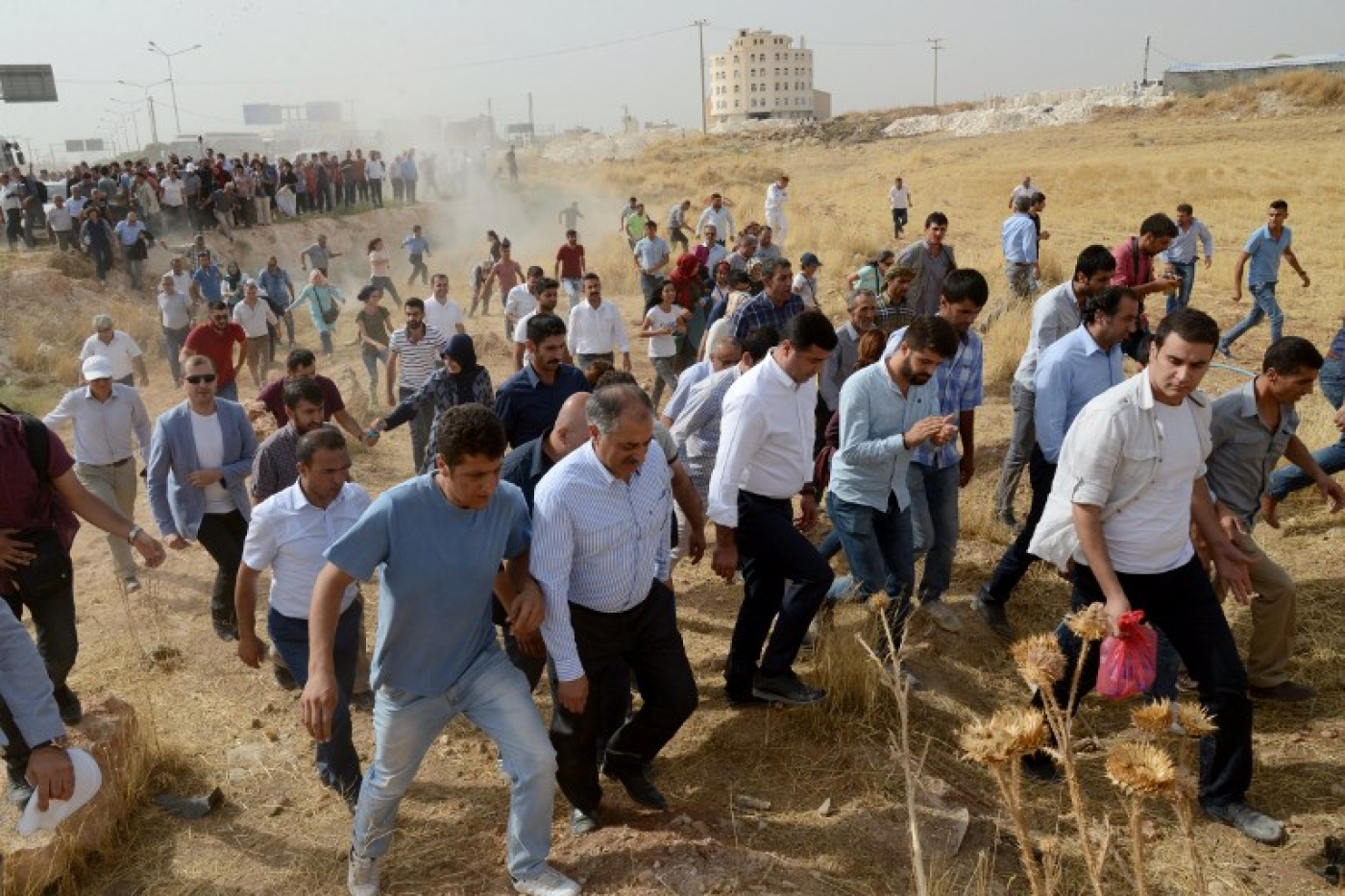 A delegation from the pro-Kurdish People’s Democratic Party (HDP) has been blocked by Turkish security forces on their way to the Cizre district of the southeastern province of Sırnak due to a curfew.

The delegation headed by HDP co-chair Salahettin Demirtas along with EU Minister Ali Haydar Konca and Development Minister Muslum Dogan, was stopped by armoured vehicles on the Midyat-Idil road.

Turkish officials said the curfew was a necessary response to "an increase in terror incidents in Cizre" as dozens of members of the security forces were killed in a series of rocket-propelled and grenade attacks carried out by Kurdish militants, Turkish media reported.

But Demirtas said the group would continue the remaining 90 kilometres (56 miles) on foot. "They can stop our convoy. But they can't stop us walking," he said.

The curfew has been placed in the district since Friday after violent clashes between militants from the Kurdistan Workers’ Party (PKK) and the police broke out.

Hundreds of Kurds from surrounding areas have reportedly marched towards the Cizre district to show their support for the HDP's delegation visit.

Pro-Kurdish activists claimed a military operation in Cizre had cost seven civilian lives, with people stuck in their houses due to the curfew.

In the meantime, protests against the PKK which sparked across the country on Tuesday continued throughout many Turkish provinces, including the predominantly Kurdish province of Sanliurfa, reported the Turkish Cihan news agency.

Thousands of Turks have taken to the streets since Monday to denounce violence and attacks carried out by the PKK against Turkish security forces.

At least 30 soldiers and police officers have been killed in a series of deadly attacks by the PKK since Sunday night. On Tuesday the group attacked a minibus taking police to the Dilucu border post with neighbouring Azerbaijan, while on Sunday, 16 soldiers were also killed by the outlawed group in a twin roadside bomb attack in Daglica in the southeastern region of Hakkari.

During the protests, people closed main roads connecting 43 provinces while they marched with Turkish flags in their hands and sang the national anthem, reported Cihan.

On Tuesday, locals demonstrated in public squares and main roads across at least 35 of Turkey’s main cities and provinces including Istanbul, Anakara, the northern Turkish region of Zonguldak, the southern city of Mersin, the central cities of Afyonkarahisar, Corum and Cankri, and the western cities of Bursa and Manisa, reported the Turkish daily HaberTurk.

Protesters called for unity, an end to terrorism and chanted slogans in support of the soldiers and policemen who were killed in the attacks.

“We are proud of you… this land loves you,” said the demonstrators in reference to the police and army officers killed, reported Cihan news agency.

“Do not die our martyrs, our country cannot be divided” was heard across many neighbourhoods in Istanbul, said locals on Tuesday night.

Other demonstrations became violent however, as far-right activists targeted dozens of offices belonging to HDP.

Many of the attacks were reportedly initiated by supporters of the far-right Nationalist Movement Party (MHP) and members of the Grey Wolves (Ülkücü Ocakları), an ultra-nationalist organisation which has close links to the party, whose members believe that the PKK and Kurdish activists are seeking to break up the country.

Politicians have commented that the escalating violence may stall general elections scheduled for the 1 November.

Demirtas warned on Wednesday the country was being dragged into a civil war after a night of nationalist-tinged "lynching" that left several of its offices in flames.

A deteriorating security situation in Turkey's mainly Kurdish southeast, will make it difficult to hold an election planned for November, he said.

Commentators warned Turkey risks being plunged into a protracted internal conflict, as the government keeps up a huge military operation against PKK militants while they hit back.

“The PKK violence is undoubtedly helping rally grass-roots support among conservative Turks for President Erdogan and the AKP. Moderate Kurds of the HDP are now sidelined,” wrote David Barchard on Tuesday.

The escalations come after 33 pro-Kurdish activists were killed in a bomb attack blamed on Islamic State militants in the border town of Suruc on 20 July. The ensuing violence has led to the breakdown of a two-year ceasefire agreed between the PKK and Turkish government.