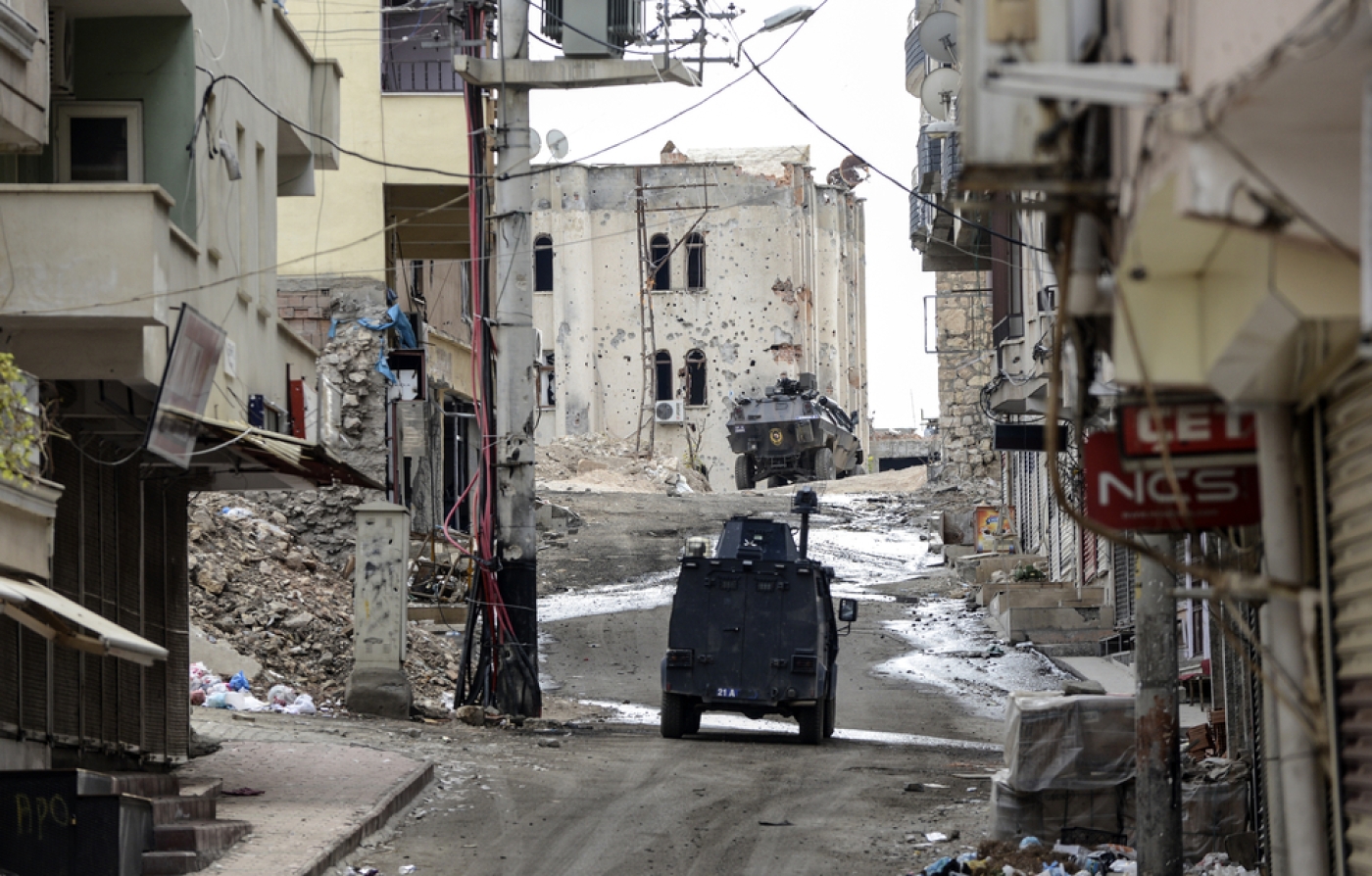 Military vehicles on a deserted street of Silvan in southeastern Turkey, during a curfew following clashes between Turkish forces and Kurdish militants (AFP)
By
Alex MacDonald

Several people have been killed as fierce clashes continue between Kurdish fighters and Turkish forces in the southeastern town of Silvan.

The Turkish military has deployed helicopters and tanks against the town, which has been under curfew for nine days, and locals have warned that its 90,000 residents are running low on food, water and electricity.

At least seven people, including two civilians and a policeman, were reportedly killed as members of the Patriotic Revolutionist Youth Movement (YDG-H) - usually referred to as the youth wing of the outlawed Kurdistan Workers Party (PKK) - fought with Turkish forces.

YDG-H members have erected barricades and closed off streets, often armed with AK-47s.

Speaking to the pro-PKK Firat News Agency (ANF), one YDG-H fighter set up their conflict in terms of resistance against a Turkish state which still refused to concede rights to the Kurds.

“History has never written about the atrocity suffered by the Kurdish people [at] the hands of the Turkish state,” said Ekin Firat, a young woman involved in leading the “popular resistance” in Silvan's Mescit neighbourhood.

“Our goal is not to dig trenches alone, but rather to show that we could triumph over the state's techniques by means of trenches, which form a defence against the attacks targeting our people. These are areas where we protect our people from the state's atrocity.

“These are areas where we produce solutions to problems not settled by the state,” she added.

A delegation of deputies from the pro-Kurdish People's Democratic Party (HDP) travelled to Silvan to observe the clashes.

Feleknas Uca, Nursel Aydogan, Ayse Acar Basaran, Sibel Yigitalp and Mehmet Ali Aslan visited the town along with representatives of the Diyarbakir Bar Association, but were reportedly not allowed to enter the districts under curfew.

“The authorities are not allowed to transfer the dead bodies to the morgues,” said Aslan, speaking to IMC TV.

“I called 112 for an ambulance, but they responded that they will call me later after speaking with the Silvan Police Department. Then, they told me that the ambulances are not allowed to enter three neighbourhoods due to an ongoing military operation.”

Local Diyarbakir authorities have denied claims that by some locals that helicopters were dropping bombs on civilians.

"Claims in some media outlets such as 'civilians are being targeted in the operation, a five-year-old child was killed by bombs, helicopters are throwing bombs with the aim of bringing the people of Silvan on their knees,' are baseless,” said the Diyarbakir governor’s office.

"The operations against the terrorists will continue with determination," it added.

'Kurds have a right to defend themselves'

Turkey’s southeast has been in a state of unrest since a two-year ceasefire between the Turkish state and the PKK ended in July.

Since then, over 150 Turkish police and security officials have been killed in clashes with Kurdish fighters, while the military claimed to have killed well over 1,000 PKK fighters, mostly in northern Iraq, but also in Turkey - though the PKK disputes these figures.

As the security situation deteriorated and an increasing number of Kurdish politicians and activists have found themselves behind bars. Numerous towns and districts in the southeast have begun to declare political autonomy from the state.

Though the HDP has sought to distance itself from the YDG-H, Turkish security officials have often conflated the two, with Turkish President Recep Tayyip Erdogan on more than one occasion referring to votes for the HDP as a vote for a “terrorist organisation”.

Mahmut Bozarslan, a Kurdish journalist who recently left Silvan, said that the military was trying to re-assert its authority over the area following the declarations of autonomy.

“They do not want to leave the area to the PKK,” he told Middle East Eye.

It has been commonplace among the Kurdish regions of Turkey to blame the ruling Justice and Development Party (AKP) for being complicit - either tacitly or directly - in a series of bomb attacks against Kurdish and left-wing activists, including one in the border town of Suruc in July which has often been pinpointed as the end of the ceasefire.

Since then, many Kurdish activists have claimed that the AKP has been seeking revenge for the HDP depriving it of an absolute majority in the Turkish parliament and thus the constitutional ability of Erdogan to transfer more power to the presidency.

Nazmi Gur, the HDP Vice co-Chair for Foreign Affairs, said that the actions of YDG-H reflected a natural response to the government’s incursion in Silvan.

“When you attack somewhere, there will be a need for defence,” he told MEE. “The Kurds have a right to defend themselves from any brutal attacks.”

He said that the HDP was “strongly against” the killings and escalation on both sides, but said that the government was ultimately responsible for the loss of life.

“It’s the AKP and Mr. Erdogan who broke the ceasefire and who finished the peace process.”

He added that the PKK had declared a unilateral ceasefire prior to the second round of elections in November but that “the AKP never recognised this, never ceased their military activities, even on the day of the elections.”

'They blame both sides'

As the unrest in the southeast shows little sign of winding down, many residents are growing weary of the constant instability.

“People are getting angry with this situation,” said Bozarslan.

“They blame both sides - some people said that if the PKK did not bring this violence within the cities, the state would not react like this.”

“On the other hand, some people blame the security officials, they say if they didn’t put this pressure on Kurds, the PKK would not have brought the strategy of sieges and barricades to the cities.”