Turkish authorities have expelled more than 3,900 people from the civil service, military and gendarmerie, the government said in its Official Gazette on Saturday, in what appears to be the latest large-scale purge related to last year's failed coup.

The expelled included prison guards, clerks, academics, and employees of the religious affairs ministry, all of whom were suspected of links to "terrorist organisations and structures presenting a threat to national security," the government said.

It is the second large-scale purge since the narrow victory of a 16 April referendum giving President Tayyip Erdogan sweeping powers. On Wednesday, more than 9,000 police personnel were suspended and another 1,000 detained for alleged links to the network of the US-based cleric Fethullah Gulen, who is blamed by Ankara for the failed coup.

Some 1,127 employees of the justice ministry, including prison guards and clerks, 484 academics, and 201 employees from the religious affairs directorate were expelled, the government said on Saturday.

Some 120,000 people have already been suspended from jobs ranging from the civil service to the private sector, and more than 40,000 arrested, following last year's failed coup.

Mass detentions immediately after the attempted coup were supported by many Turks, who agreed with Erdogan when he blamed Gulen for orchestrating the putsch, which killed 240 people, mostly civilians. But criticism mounted as the arrests widened.

Relatives of those detained or sacked since July say they have nothing to do with the armed attempt to overthrow the government, and are victims of a purge designed to solidify Erdogan's control.

Turkey also on Saturday banned hugely popular television dating shows under the state of emergency imposed in the wake of the failed coup, according to a decree published in the official gazette.

"In radio and television broadcasting services, such programmes in which people are introduced to find a friend.... cannot be permitted," said the text of the decree. The government had already indicated it was in favour of such a ban.

Deputy Prime Minister Numan Kurtulmus said in March that the ban was in the pipeline, arguing the shows do not fit in with Turkish traditions and customs.

"There are some strange programmes that would scrap the institution of family, take away its nobility and sanctity," Kurtulmus said at the time.

"God willing, in the near future, we will most likely remedy this with an emergency decree,"  he said.

Opponents of the ruling Justice and Development Party (AKP) government frequently voice fears that Turkey is sliding toward conservative Islam. 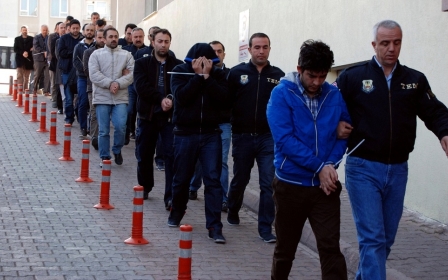