Turkish tanks enter Syria, as Erdogan promises to target IS and Kurdish militants ISTANBUL, Turkey – Turkish special forces backed by US-led coalition air support launched an incursion into Syria in the early hours on Wednesday to take the town of Jarabulus from the Islamic State (IS) group, Turkey’s state-run news agency Anadolu reported.

Turkish tanks crossed the border into Syria in what officials are calling operation "Euphrates Shield," with Turkish President Recep Tayyip Erdogan stating on Wednesday that his forces would be targeting "terrorist groups like Daesh (IS) and PYD," referring to the pro-Kurdish Democratic Union Party, whose military wing the People's Protection Units (YPG) continue to make military gains in northern Syria.

"Attacks on our country from Syria brought things to this point," said the president, adding that "no one will threaten our being".

"They think every attack on us weakens us. They are mistaken. They make us stronger."

Ankara is coordinating the attack with pro-Turkish Syrian rebel groups that are now said to have pushed at least 3km into Syria and have captured four villages, Turkish state media said. CNN-Turk added that a group affiliated to the Free Syrian Army, the Sultan Murad Brigades - a group largely composed of Syrian Turkmens - was leading the charge.

The operation was launched at 4am local time (1am GMT) and is being carried out by a joint task force of the Turkish military accompanied by US-led coalition air support.

It comes as the US vice president, Joe Biden, arrived in Turkey on Wednesday for critical talks with its leadership. Biden is the highest-ranking Western official to visit Turkey officially since the failed 15 July coup.

It is expected that Biden will seek to repair relations with its NATO ally after the putsch, which Ankara blames on Pennsylvania-based preacher Fethullah Gulen who the US has thus far failed to extradite.

A senior US official travelling with Biden said on Wednesday that Washington was providing Turkey's military with air cover, intelligence and advisers in its offensive.

"We want to help the Turks get ISIL off the border" between the two countries, the official told reporters on the condition of anonymity while using an alternative acronym for the IS group. "We'll have close air support if there's an operation," he added.

This military operation marks the first time troops from a NATO-member state have officially gone to fight on the ground in Syria with Turkish F-16s also pounding targets in Jarabulus.

However, Saleh Muslim Mohammed, co-chair of the PYD, tweeted in response to the Turkish incursion that the country would be "defeated" just like IS:

Turkey and the US have been at odds over the role of PYD/YPG in the fight against IS for years, with the unnamed official stressing that Washington was also helping ensure that Kurdish fighters further south do not provoke a conflict with Turkish forces by moving north toward Jarabulus.

The United States has made it clear that "we don't and won't support them going north, and they can't without our air cover, so we've put a lid on them moving north," he said.

"I think we've put a lid on the Turks' biggest concern [which] gives us breathing space to make sure the Jarabulus operation is done the right way."

Washington sees the YPG as its most effective ground force and has been supporting it with air strikes and advisors since February, but Ankara views it as a terrorist entity whose political wing the PYD has organic links with the Kurdistan Workers’ Party (PKK).

Turkey has waged a decades-long war with the PKK, which is also listed as a terrorist organisation by the US and the EU.

Turkey feared a PYD-controlled strip along its entire border with Syria after the US-backed Syrian Democratic Forces (SDF) - a coalition led by the YPG - took the town of Manbij from IS earlier this month. It was determined not to see Jarabulus fall into SDF hands as well. Turkish foreign minister Mevlet Cavusoglu told a press conference in Ankara that the Turkish army would continue its efforts against the YPG, saying they were "no different" from the PKK.

"Why did Salih Muslim and the YPG get upset by our operation against Daesh [IS]?" he asked, referring to the PYD leader's tweet.

"They have their own hidden agenda."

He added that the YPG should "not cross west of the Euphrates".

"The US promised this to us," he explained. "If they cross we will take the requisite action."

No attack on Syria's integrity

Several mortar rounds from IS-held Jarablus hit the Turkish border town of Karkamis on Tuesday, prompting the army to pound the militant positions on Syrian soil with artillery strikes.

On Tuesday evening, Turkish authorities ordered residents to evacuate the Turkish border town of Karkamis that lies opposite of the IS-controlled Syrian town of Jarabulus, television reported.

Police warned residents through loudspeakers to evacuate from Karkamis "for safety reasons" which was hit by a series of mortar bombs fired from IS-held areas.

Heavy artillery fire by Turkish military as tanks enter into Syria from #Jarablus area as part of anti-ISIL sweep pic.twitter.com/zd3WKUmhUr

The stated aim of the offensive is to clear the area of militants, prevent a new wave of refugees and to create conditions for humanitarian aid to reach rebel-held Syria.

Ankara has been keen to emphasise that this offensive is not targeting Syria’s territorial integrity.

Jarabulus is the last major town left in the hands of the Islamic State group along the border with Turkey.

Turkey has received officials from regional powers in the past few days. The president of the Kurdish region of Iraq, Massoud Barzani, and Hossein Jaberi Ansari, Iran's deputy foreign minister, were both in the Turkish capital on Tuesday.

There were even unconfirmed reports that Turkish intelligence officials had travelled to Damascus earlier in the week to inform Bashar al-Assad’s government of details regarding the operation.

Erdogan criticised his EU allies on Wednesday, lambasting them for their unwillingness to accept Syrian refugees. 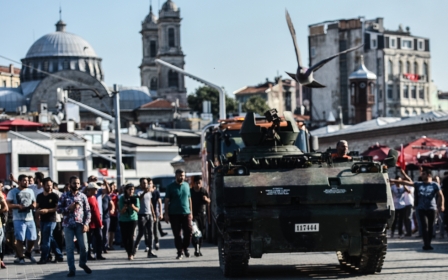 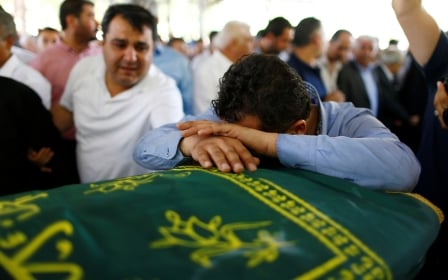