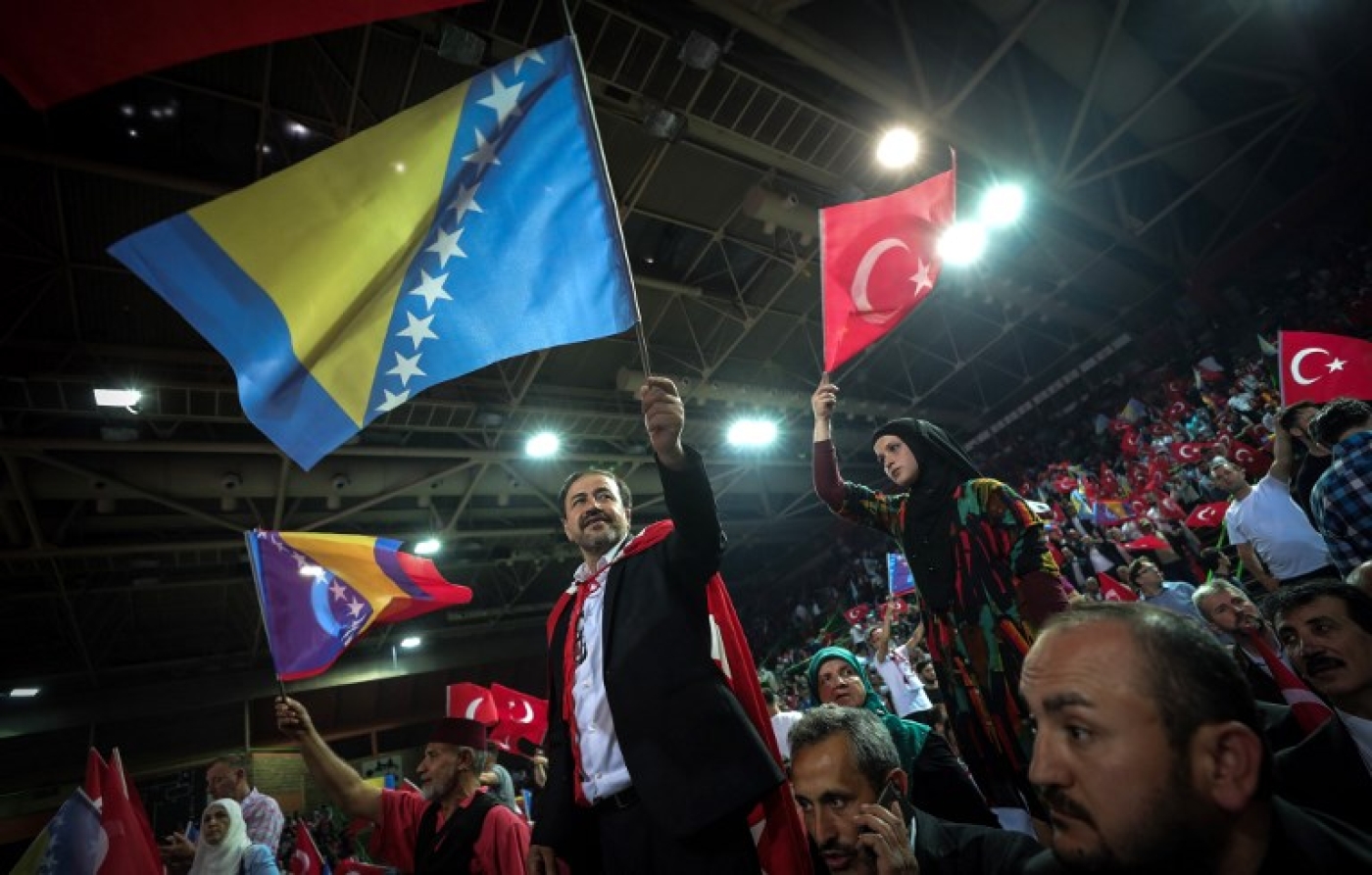 Around 15,000 supporters of President Erdogan were expected to attend the event in Sarajevo (AFP)
By
MEE and agencies

Turks from across Europe gathered in the Bosnian capital Sarajevo on Sunday to hear President Recep Tayyip Erdogan give his only election rally outside of Turkey, after other European nations banned similar events on their soil.

Thousands of Turks came from Germany, the Netherlands, Austria and across the Balkans to see Erdogan speak ahead of Ankara's presidential and parliamentary elections next month.

They converged on Sarajevo's largest sports venue, Zetra, where the rally was to be held amid tight security.

Organisers said they expected up to 15,000 people to attend the event in a city that was chosen after countries such as Germany, Austria and the Netherlands banned Turkish politicians from holding such rallies, stoking tensions between them and Ankara.

"If thousands of people coming from different parts of Europe cannot meet the leader they want to hear, that would not be right for me. Hence we will meet with them here," Erdogan told a news conference before the rally.

Three million Turkish expatriates are allowed to vote in the 24 June elections, including 1.4 million in Germany.

The expatriate European vote is generally a source of support for Erdogan's AKP party, and officials are keen to rouse a strong turnout in Europe.

Despite the ban in other European countries, Bosnia had not been expected to stop Turkish politicians from campaigning on its soil, given the close ties between Bosnian Muslim leader Bakir Izetbegovic and his SDA party and Erdogan's party.

According to Bosnian media, the AKP is planning to open a representative office in Bosnia soon.

"We will show that he [Erdogan] has friends and that there are those who are proud of him," Izetbegovic, the Muslim member of Bosnia's tripartite presidency, told his supporters last week.

The Turkish leader was not liked in the West and there were many "who do not like him in this country," because "he is a powerful Muslim leader that we have not had for a long time," Izetbegovic argued.

Nevertheless, support was not unanimous.

In an ironic front-page article, the daily newspaper Vecernji list asked whether, after the rally for "Sultan" Erdogan Sarajevo might not soon be welcoming Russian leader Vladimir Putin or even Syrian President Bashar al-Assad.

Theatre director Dino Mustafic felt Erdogan's visit harked back to the colonial times of the Ottoman Empire, when the Balkans, notably Bosnia, were ruled by the Ottomans for more than four centuries until 1878.

The event would be an occasion for "poor local people to euphorically applaud their sultan," he tweeted.

But Muhamed Yanik, a 20-year-old student, said he had travelled 28 hours by bus from Germany to see Erdogan. "If he says so, we will die for him," Yanik said.

"Turkey is our mother nation," said Coskun Celiloglu, a Macedonian student of Turkish descent. "We came to Sarajevo just for one day to support our saviour Erdogan."

Turkey’s hunt for those alleged to have been involved in the failed July 2015 coup has often led it to the Balkans.

In March, Turkey carried out a secretive operation with Kosovo's interior ministry to arrest and extradite six Turks from Kosovo for alleged links to the Gulen movement, which Turkey claims orchestrated the coup attempt.

Last month a Bosnian court turned down a Turkish extradition request for a Turkish citizen with alleged links to Fethullah Gulen, the leader of the movement that bears his name.

A day before his visit, Turkey's state-run Anadolu news agency reported there had been tip-offs from intelligence agencies about a potential assassination attempt against Erdogan while he visits the Balkans.

Asked about the report, Erdogan said: "This news reached me and indeed that is why I am here," adding that the tip-off was from Turkey's National Intelligence Agency.

"Such threats and operations cannot deter us from this path."

Turkey has good relations with Bosnia, and Turkish companies have played a major role in the country's reconstruction following its 1990s inter-ethnic war.

Before the rally, Erdogan pledged a multi-billion investment in a key motorway connecting Sarajevo with Belgrade.

Bosnia and Turkey signed a letter of intent for the construction of the highway connecting the two Balkan capitals, a project estimated to cost $3.5bn.